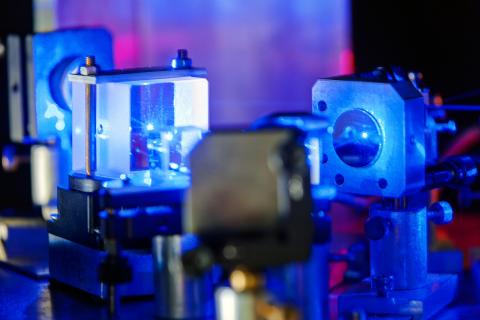 Jean-Jacques Greffet is a researcher at the Charles Fabry Laboratory (LCF – Univ. Paris-Saclay, the Institute of Optics Graduate School, CNRS) and Director at the Institute for the Sciences of Light.  The physicist, who works with the Plasmonics and Quantum Nanophotonics team, is searching for new properties of light at the nanoscale which will transform our daily lives.

Nanophotonics is the manipulation and study of light at the nanometre scale (1 nm or 10-9 m). This new field is the result of several different scientific communities coming together around twenty years ago. These included opticians who, in the 1980s, challenged the law in physics that objects smaller than a wavelength cannot be resolved; physicists who succeeded in making material (semiconductors) capable of emitting, absorbing and modifying light on the scale of a few nanometres, and chemists who succeeded in synthesising nanoparticles. “Nanophotonics manages to enclose photons and electrons in small volumes to force them to interact and thus to emit or absorb light in a controlled manner,” explains Jean-Jacques Greffet.

Some new properties of light

“Below 100 nanometres, most of the behaviour of matter changes,” explains Jean-Jacques Greffet. “Nanoscience has the unique advantage of being able to bring out new physical properties at this scale.” For example, below 100 nanometres, the law of physics which determines the resistance of an electric wire becomes obsolete. The colour of materials also changes. Gold, for example, becomes green and partially transparent. Alternatively, silver nanoparticles turn red at 10 nanometres. “These types of particles are used in pregnancy tests and Covid home testing kits,” points out the researcher. “Silver nanoparticles are tiny, but very visible. By using antibodies which selectively bind to these nanoparticles and to the virus being identified, it’s possible to accumulate nanoparticles in the test area and then see their presence or absence and the viruses attached to them with the naked eye.”

Until recently, physics taught us that the radiation exchange between two surfaces could not be greater than a certain temperature-dependent value. By studying incandescence at the nanometre scale, Jean-Jacques Greffet has proven the opposite. In the near field, i.e. for distances of less than about 100 nm, this value actually increases by ten, a hundred or a thousand times and reveals two new physical properties. “When moving closer to a surface than one micrometre (1 µm or 10-6 m), the electromagnetic energy density is one hundred to one thousand times more intense than that found at ten micrometres. In this way, the flux exchanged between two closely spaced surfaces at sub-micrometre distances can increase by the same amount. The heat is then dissipated without contact.” The other equally astonishing property of near-field radiation is that it can be quasi-monochromatic as it is often a particular frequency which dominates depending on the material. “These properties mean that it could have applications in the field of thermophotovoltaic energy conversion, for example.”

Light on the scale of the invisible

“It’s also possible to develop incandescent sources whose properties were inconceivable until recently. These can be directional, like a laser, with a narrow spectrum and emitting polarized radiation.” These sources are also very easily scalable. “We can switch an incandescent source on and off over ten million times per second. This requires cooling it in a millionth of a second by laying extremely small wires on a cold substrate. To achieve this, we create metasurfaces which consist of small metal discs placed on a multilayer substrate with diameters and thicknesses of less than one micrometre. In this way, we’re able to create systems which preferentially absorb certain frequencies in an extremely efficient manner.” These metasurfaces, which are structured on an invisible scale, reveal properties of light absorption and emission which do not exist in nature and make it possible to control all its aspects.

In 2015, the researcher published a first paper on the development of directional and monochromatic sources, and then another paper five years later on their modulation. A third will soon be published on circularly polarised emission.

He chose physics when he was 18. “It’s a subject which answered questions I’d been asking about the world since my childhood.” In 1979, he began his studies at the ‘École normale supérieure de Cachan’ (today ENS Paris-Saclay) and obtained his agrégation in 1982. The researcher completed his Bachelor's and Master's degrees in Solid-state Physics at Université Paris-Sud (now Université Paris-Saclay), and then defended his thesis at the ‘École centrale’ in 1988. While teaching there as an assistant professor, he was recruited as a lecturer and then as a professor. After 25 years, Jean-Jacques Greffet left the École centrale for the Institute of Optics Graduate School in 2010.  “I wanted to refocus on doing research in and teaching about optics.” In 1992, he completed one of the first HDRs (authorisation to supervise the research of others) and sealed his scientific destiny in 1994 when his research led to the discovery of near-field optical microscopy. “You have to jump on the bandwagon when something completely new appears in the field of science.” In 2015, he became a Fellow of the Optical Society of America and was also awarded the Prix Servant by the French Academy of Sciences. The physician was also a senior member of the ‘Institut universitaire de France’ (University Institute of France) from 2009 to 2014 and then from 2015 to 2020.

After having directed the Doctoral School of Waves and Matter (EDOM) from 2014 to 2019, Jean-Jacques Greffet took on the management of the Institute for the Sciences of Light (ISL) at Université Paris-Saclay. “The role of the ISL is to increase the visibility of the excellent work carried out by the 700 researchers of all disciplines who work in the field of light at Université Paris-Saclay in an inter-disciplinary manner with all the Graduate Schools.” The aim is also to build cooperation by organising conferences, seminars, programmes or even funding for PhDs carried out between the Graduate Schools. The ISL also offers summer schools. “We’re hoping that these will become a regular event and that over time they will become international benchmarks of excellence. By fostering the mixing of students from all countries today, we’re shaping the international future of light science at Université Paris-Saclay,” says Jean-Jacques Greffet in conclusion.