In France, higher education is organised in accordance with the LMD system (Licence-Master-Doctorat). This system is common to university education in all European countries part of the Bologna process, including France.

There are three types of university degrees in France:

There are two types of Master's: research Master's, which enable students to progress to a doctorate, and vocational Master's which prepare students for the world of work.

Every Licence and Master's is defined according to a field of study, a specialisation and a path. For instance, there is a Master's in the "Science, Technology and Health" field specialising in "Fundamental and Applied Mathematics" which follows the "Probability and Statistics" path.

The Engineering Degree (diplôme d’ingénieur) is a national one. The national institute for engineering qualifications provides engineering schools with accreditation, thus enabling them to award these degrees.

No predetermined set of equivalences between French and foreign degrees is officially recognized in France.

Each institution is free to set its own admission criteria and make its own admission decisions based on each applicant's background and the demands of the programme to which the applicant is seeking admission. This freedom allows French institutions to create well-qualified, well-balanced student cohorts without risking the integrity and reputation of their courses.

Each completed module yields a certain number of ECTS credits. 30 credits are required to validate a semester, and 60 to validate an academic year.

Credits, once awarded, cannot be taken away: if a year has to be retaken, the validated credits are retained the following year and the student need only retake the modules which were not validated the previous year.

In the main, French higher education is still based on a whole year (undergraduate degree or Licence 1, Master’s 2, for example) rather than being divided into semesters. 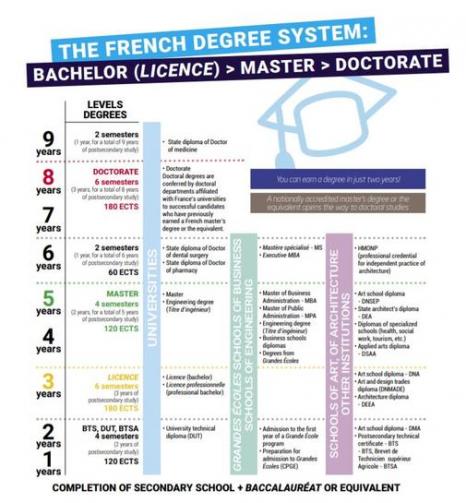