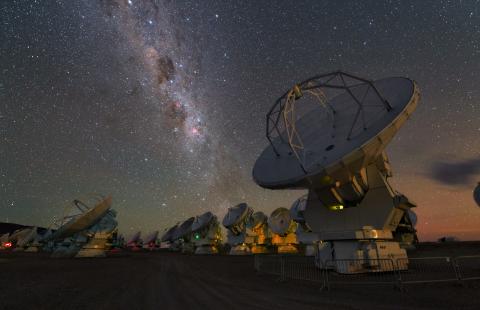 Emanuele Daddi: Why stars are born and then die

Emanuele Daddi is a researcher at the Laboratoire de cosmologie et évolution des galaxies (LCEG) (Laboratory of Cosmology and Evolution of Galaxies) at the Astrophysics, Instrumentation, Modelling Department (AIM - Université Paris-Saclay, CEA, CNRS). For over twenty years, he has been exploring the distant Universe in order to understand the evolution of galaxies. He is one of the first to have established a link between their mass and their rate of star formation. Today, he is uncovering further information about the physical properties of these large bodies in the Universe and by doing so is providing us with a deeper understanding of the formation of galaxies.

What are the physical processes that have determined the formation of galaxies and their transformation over the course of cosmic time? Why do some galaxies still make stars while others have ceased to do so? To answer these questions, Emanuele Daddi primarily uses observations from the ALMA (Chile) telescope and NOEMA NOEMA (France) telescope - a French-German-Spanish instrument shared by CNRS, the Max-Planck Institute in Germany and the Instituto Geografico Nacional (ING) in Spain.

Fifteen years ago, Emanuele Daddi demonstrated the importance of dust and gas levels in the star-making process. He and his team were amongst the first to show that the merging of distant galaxies was probably a side effect of gas feedback. “Distant galaxies formed many more stars than they do now. We have shown that this intensity depends on their gas content. It’s just like a car - the more gas, the faster it goes!” explains the researcher. Today, he is interested in anomalies observed in the sky which in some way confirm this theory.

The researcher studies the relationship between the mass and the (disc-shaped) form of 10 billion-year old, massive galaxies. “You would expect to find circular shapes of a certain size. However, a significant proportion of them are much smaller. It is therefore difficult to understand why such small ‘discs’ have such a large mass. One explanation could be that these galaxies have merged, which also explains why some of them have stopped forming stars.”

The researcher also studies the balance between the gases that arrive on galaxies and the amount they actually use to form stars using a feedback mechanism. “The gas falls into the galaxy, which then produces stars. These are illuminated, become agitated and generate winds. Elsewhere, the gas also falls into supermassive black holes at the centre of galaxies, causing supernovas (the explosion of stars at the end of their lives which releases a lot of light), and which prevents the formation of new stars.”

This gas feedback phenomenon blocks any more star-forming activity, which eventually comes to a complete stop. However, Emanuele Daddi’s team have very recently discovered that this standard feedback model does not explain everything. “We have observed a galaxy in which a huge cloud of expelled gas is not related to this feedback, but is probably due to a previous merger in that galaxy. During these melting phenomena, part of the gas is compacted and conserved and another part is expelled.” This a new understanding of the physical mechanism which brings to light the important role, previously underestimated, of the merging of galaxies in their evolution.

These mechanisms are very complex to study. Without compromising on the physical theory, Emanuele Daddi’s aim is to simplify it as much as possible. “For the past fifteen years or so, I have been trying to reduce the sheer number of these observations into one, simple message.” For him, this is one of the reasons why, along with Hervé Aussel, Frédéric Bournaud and David Elbaz, he is one of the most celebrated researchers in his laboratory. He became interested in becoming a researcher as a teenager when he broke his ankle playing football in his native country of Italy. “I was 14. I read an astronomy magazine which I just happened to pick up to pass the time in hospital. That’s where it all started.” After completing his scientific studies, he defended his doctoral thesis at the University of Florence in 2002. He did a first two-year post-doc (as a fellow) at the ESO (European Southern Observatory) in Germany, then a second one in the United States, in Tucson. He worked closely with the researchers at the AIM laboratory from that time, and he joined the team in 2006.

The researcher supervises a number of master's students, doctoral students and post-docs from all over the world. “Our laboratory works at a very high scientific level, which has enabled a large fraction (60 to 70%) of the young people who have passed through here to subsequently find an academic position in astrophysics in France or abroad.” According to Emanuele Daddi, this very international “atmosphere” is a general reflection of Université Paris-Saclay as a whole. “Let's be patient, as the development of this campus looks very promising.” 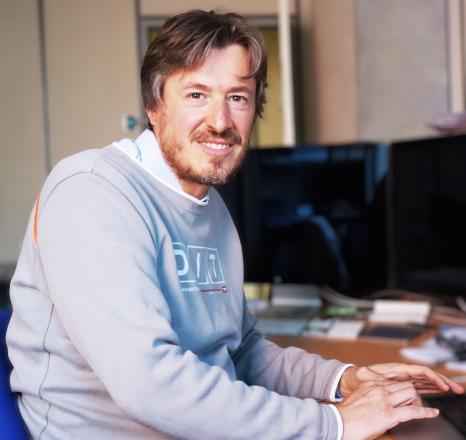