Frédéric Bournaud: Solving the mystery of how large galaxies are formed

Frédéric Bournaud heads the Cosmology and Galaxy Evolution Laboratory (LCEG – Paris-Saclay University, CEA, CNRS). His laboratory combines data observed by large telescopes with intensive numerical simulations performed by supercomputers. The goal is to solve the mystery surrounding how the major structures of the universe form over 15 billion years.

Frédéric Bournaud’s team simulates the general content of the universe. “We observe large filaments. Where they cross, we detect large overdensities containing galaxies. Galaxies are highly turbulent, agitated, rotating hydrogen discs. The densest fragments form stars. We try to understand the hierarchy in the formation of these structures, combining observation with computer theory and modelling.”

Modelling the formation of galaxies at different scales

The priority is to understand what the dark matter of the universe is composed of: hydrogen atoms, molecules, dust or unknown elementary particles? To do so, the researcher compares his observations with predictions made by all physics models. Hence the extreme difficulty in solving such equations. “We use supercomputers and enter into them the equations of physics as we imagine them, according to the hypotheses to be tested on dark matter.” The initial instant of the simulation is like a snapshot of the universe just after the Big Bang. The simulation then evolves in the computer as large filaments, large structures, galaxies, and finally their stars are formed successively. “We compare the simulation with the observation and determine the physics laws questioned in the model.”

However, the models developed must adapt to different eras in the universe and to different scales. A model can agree with one observation on a given scale, but be flawed for others. For example, it is impossible to explain the early formation of black holes in the centre of some galaxies. “We have observed them in the universe at long distances, in very young galaxies. Yet the most realistic models do not explain such early formation," says Frédéric Bournaud.

First data from the Dark Energy Spectroscopic Instrument (DESI), a very large ground spectrograph in the Arizona desert, has just reached the Institute for Research into the Fundamental laws of the universe (Irfu), with which Frédéric Bournaud has a close working relationship. “It would be impossible to interpret the data without simulation," explains the researcher. “When observing the sky at a long distance, extragalactic material produces absorption in the line of sight, making galaxies visible. By observing one galaxy from another, DESI shows all the diffuse gas between the two galaxies, which is the bulk of the volume of the universe. As a result, we can investigate all the cosmic regions that do not shine at night because they produce absorption in front of distant objects.”

Planned for launch in 2022, the Euclid satellite will take a new look at the distribution of matter in the universe: it will use a gravitational lens to measure the distortion of the images observed via the optical effect caused by the general relativity theory. It uses light deviation like a magnifying glass. “We are trying to discover the whereabouts of the bulk of the matter in the universe. We know that it is not in the stars we observe,” explains the researcher.

As part of the two major observation missions, Frédéric Bournaud’s role is to continue producing simulations using different physics models and to compare them with observed data. “It is far from simple, because the image of the observation does not necessarily resemble the image of the simulation due to different scales or light wavelengths. Some physics models reproduce galaxies better; others are more effective for representing black holes.”

Sometimes simulations produce unexpected results, such as for “so-called compact galaxies, ten times smaller than others but with the same mass. They evolve in very strange ways,” tells Frédéric Bournaud. These simulations complement the Extreme Horizon project initiated 15 years ago in Île-de-France, by the CEA, the Paris Institute of Astrophysics and the Paris Observatory, amongst others. The project is named after the cosmological horizon - the limit of the observable universe - and challenges supercomputer simulation software.

This winter, the researcher launches a European project funded by EuroHPC (European High Performance Computing). Led by the High Performance Computing Laboratory for Calculation and Simulation (LIHPC - Paris-Saclay University, CEA), the project aims to obtain, by 2022-2023, within the CEA’s Very Large Computing Centre (TGCC) in Bruyères Le Chatel, the first supercomputer with exaflopic computing power (1018flops), i.e. a billion billion operations per second. The goal is also to improve software to consume less energy. “We aim to adapt our calculations and look for other ways to mathematically solve physics equations using these future processors,” explains Frédéric Bournaud.

"Astrophysics wasn’t necessarily part of my plan,” says Frédéric Bournaud. During his thesis at the Paris Observatory, prepared under Françoise Combes and presented in 2006, he seized an opportunity to work with the LCEG which needed his skills at the time. After a short post-doctorate, he was hired in 2007. “I was given total flexibility to create my team and propose an ERC project, which has just concluded actually. It was very motivating.” Frédéric Bournaud won the Young Researcher Award from the French Astronomy and Astrophysics Society  (SF2A) in 2016, which is “recognition that our peers find our research legitimate.”

The researcher is now a Highly Cited scientist - one of the most cited scientists in the world - with four other researchers from the same laboratory. "We strive to be at the forefront of what is fairly competitive research, like many other researchers at Paris-Saclay University. It’s important to use all this cross-cutting expertise to create new ideas and produce new knowledge,” concludes Frédéric Bournaud. 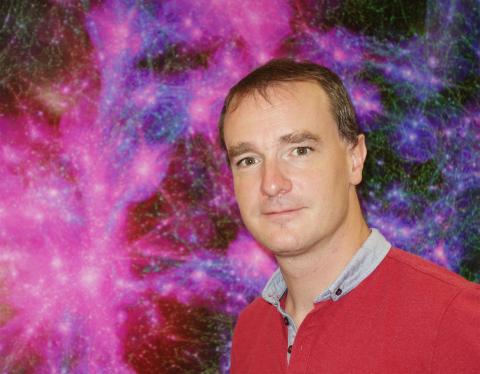