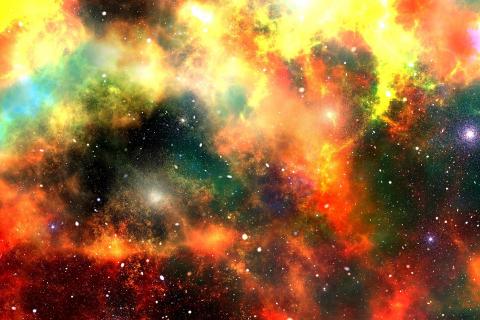 Hervé Aussel is a researcher at the Astrophysics Instrumentation Modelisation laboratory (AIM - Université Paris-Saclay, CNRS, CEA, Université de Paris). Using a multitude of data collected by the largest telescopes in the world, Hervé Aussel specialises in the study of galaxy formation. With EUCLID, the latest generation telescope of the European Space Agency (ESA), he is preparing to measure the size of the sky.

After graduating from École Centrale Paris in 1993, Hervé Aussel decided to complete his studies with a thesis at Université Paris-Sud to conduct fundamental research. "I wanted to understand how things work. During my engineering studies, I enjoyed the research internships with industry players but I was frustrated not to go any further than obtaining my degree." His passion for astrophysics dictated his course and he submitted his thesis at the Paris Observatory, hosted by what would later become the AIM laboratory. After a post-doc at Padua Observatory in Italy, he embarked on a new adventure in Hawaii, "one of the best places in the world for observational cosmology, as the University of Hawaii is fortunate enough to dispose of 15% of the observation time allocated to each of the telescopes located on Mauna Kea".

Alongside Chile, Hawaii is one of the best sites for observation. It is home to the two Keck Telescopes (USA), the Subaru Telescope (Japan) and the French 'Canada-France-Hawai Telescope'. This was a blessed period for the young researcher, who stayed on the island for four years. He carried out observation and collected and analysed data, working at the Institute for Astronomy with the James Clerk Maxwell Telescope, and then with Pan-STARRS at the University of Hawaii. When he returned to France, Hervé Aussel was recruited by the CNRS to work at the AIM laboratory in 2004.

The researcher compares galaxy observation data from about ten telescopes around the world, which use different visible and infrared wavelengths to simultaneously observe visible (dust, gas, etc.) and invisible (dark matter) mass. "When the ISO (Infrared Space Observatory) telescope developed by the ESA was launched in the 90s, the use of mid-infrared enabled us to measure the star formation rate in galaxies we could not previously see." Thanks to the development of observational methods and new technological possibilities, Hervé Aussel and other researchers were able to measure gas and dust quantities in these galaxies more precisely.

They progressively called into question data established twenty years ago. "During these events, the gas that they contained was highly compressed, which triggered bursts of star formation. We used to interpret the high infrared luminosity of some galaxies as a sign that two galaxies were colliding. However, since my thesis and the projects that I have conducted in the meantime using the ISO, Spitzer and Herschel missions successively, I have discovered that these are actually completely "normal" galaxies. Their high star formation rate is due to their extremely high gas content and there is no need to invoke galaxy mergers, which are not sufficient to explain the phenomenon."

Euclid: at the heart of the Universe

Since the end of 2016, Hervé Aussel has been involved in the ESA's space mission, Euclid, named after the telescope which is set to measure the fundamental parameters of the Universe by the end of 2022. It will very accurately examine the quantity and distribution of dark matter in samples of galaxies. "This data previously came from simple simulations. With Euclid, we can actually measure it." The researcher had to adapt to new observational techniques and became "lead scientist for the ground segment". His task is to ensure that the analysis of Euclid data will help to meet the scientific objectives of the mission.

Heirs of Méchain and Delambre

Using Euclid's two instruments, the approximately 1,400 researchers of the mission will focus on confirming Einstein's theory of general relativity and the fact that it correctly describes relativity on a massive scale. "It is a particularly challenging project, smiles Hervé Aussel. Thanks to Euclid, we will measure the curvature of the Universe, a bit like Méchain and Delambre measured the Earth's curvature during the French Revolution. And we will do it for various periods. This will help us to deduce the quantity of dark energy in the Universe and its variation over time."

The quality of the measurements collected will be such that the researchers will be able to go back to half of the Universe's age, i.e. seven billion years. Thanks to optical imaging, they will measure the shapes of galaxies with extreme accuracy. "The presence of mass between the galaxy and ourselves very slightly deflects light-rays, a phenomenon referred to as gravitational lensing. If we know the shapes of galaxies a priori, we can determine the quantity of mass that stands between the galaxy and ourselves," explains Hervé Aussel. "These observations will be made with the same image resolution as the NASA's Hubble telescope, but on 15,000 deg2 instead of the hundreds of square degrees observed by the Hubble, covering the entire extra-galactic sky," says the astrophysicist.

Hervé Aussel received the Euclid Consortium prize and the Daniel Guinier prize from the French Society of Physics (Société française de Physique) in 1999 for his thesis. "I am lucky in that I find it quite easy to understand complex systems, a quality that I enjoy using to serve large space projects." The researcher is happy to feature among the most cited researchers in the world (Highly Cited Scientists). This success is due to his participation in the global project COSMOS and his "fundamental work" within the Euclid Consortium.

"I do this job to try to understand the Universe I live in. The societal impact of astrophysics may be equal to zero but I think it's important to make people dream,” Hervé Aussel concludes.