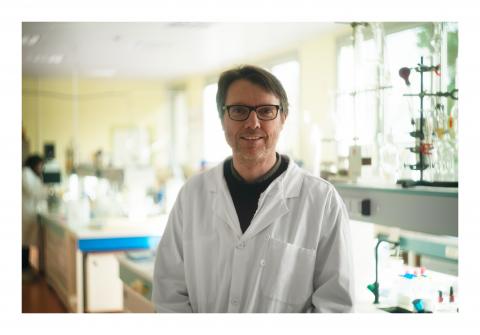 Philippe Dillmann is Head of Research at CNRS and has just received a silver medal. He is in charge of the Laboratoire archéomatériaux et prévision de l’altération (the Archaeomaterials and Weathering Prediction Laboratory) (LAPA - Université Paris-Saclay, CNRS, CEA). He is a specialist in archaeological science and uses highly specialist material analysis techniques on archaeological artefacts - one of the reasons why he is now also one of the coordinators on the CNRS Notre-Dame Project.

At the Laboratoire archéomatériaux et prévision de l’altération (LAPA - Université Paris-Saclay, CNRS, CEA)1, chemists, researchers in material sciences and archaeologists form a multidisciplinary team which is unique in France. They are interested in the origin, lifespan and demise of metals in different time frames both for historical information and for restoration, conservation and prediction purposes.

To trace the origin of materials, Philippe Dillmann uses methods taken from chemistry and materials science. ‘We are able to reconstruct not only the heat treatments to which the metals have been subjected, but also their origin, by comparing their chemical and isotopic composition with other objects of the same type or waste (slag) found on production sites. They contain elements in very small quantities. These traces are enough for their respective interrelationships to form a signature. It works like a digital fingerprint. If two objects found in different locations have the same signature, there is a strong chance that they were produced in the same place’.

The team is working with the Laboratoire de mesure du carbone 14 (LMC - Université Paris-Saclay, CEA, CNRS, MCC) to carry out radiocarbon dating. This takes some considerable skill as carbon has to be extracted from ferrous materials and is only present in certain microscopic areas. ‘Using radiocarbon methods, we can date the carbon from charcoal found in the metal which was used in the 19th century to turn ore into iron. ’

Another goal is to understand how to halt the corrosion process of historic materials and to protect them, as well as to anticipate the future behaviour of modern materials, such as those storing nuclear waste. ‘We use old nails to understand how corrosion layers form and evolve, and to study how they interact with protective products.’ The scientist and his team are also the first in the world to have been able to understand the mechanism and determine the rate of corrosion of objects as a result of experiments carried out at a nanometric scale at the SOLEIL synchrotron facility.

Philippe Dillmann and his team are leaders in archaeological science. The discipline dates back to the 1950s, but a turning point has been reached in the extent to which human sciences have now been integrated. ‘We are the only ones who really co-develop with the archaeologists, who are part of the team. This is very important for making good use of the correct chemical information. The link with them allows us to make good use of the latest techniques in materials science, from the synchrotron to mass spectrometers, precisely because interdisciplinary issues have been properly addressed.’ The scientist, while based at CEA Saclay, also reports to the Institute des sciences humaines et sociales (Institute for Humanities and Social Sciences) at CNRS and leads CAI-RN, a national network of interdisciplinary expertise in the field of archaeological science.

From Celtic swords to the synchrotron

Philippe Dillmann was awarded his engineering degree from the Université technologique de Compiègne in 1995. His future path became clear when he studied how Celtic swords found on an important archaeological site were made. ‘Materials science can provide historical answers.’ In 1998, he defended his thesis on Medieval steel production processes, for which much of his work took place at the Laboratoire pour l'utilisation du rayonnement électromagnétique (LURE) in Orsay, where he used a synchrotron for the first time. This was followed by a postdoc at CEA at Saclay in 1999. He was taken on as a research engineer one year later. During this period, he contributed to the creation of a team dedicated to the problem of predicting the behaviour of materials over the very long term. ‘This team has now been in existence for 20 years.’ In 2003, Philippe Dillmann became Head of Research at CNRS.

After receiving a commendation in 2007 at the Grand prix de la Société française d’énergie nucléaire (French Society for nuclear energy) as well as the UGINE - René Castro prize from the Société française de métallurgie (French Metallurgy Society) in the same year, Philippe Dillmann has just received a silver medal from CNRS in 2020. ‘I feel very honoured, because on the one hand it has been awarded by my peers in recognition of all my work, and on the other, it rewards the truly interdisciplinary nature of my research and my team’. Students are also attracted to this combination of human sciences and physical chemistry. ‘It’s not an easy route to choose’, warns the researcher. ‘You have to be led by a passion, whilst maintaining scientific rigor,’ he concludes.