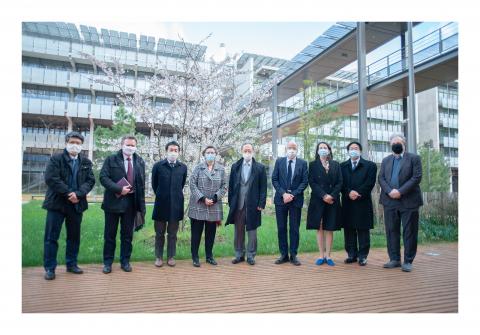 On March 19, the new ambassador of Japan to France, H.E. Junichi Ihara, was hosted at Université Paris-Saclay.

Among its component institutions, ENS Paris-Saclay has 14 active agreements and several structured research actions with Japan, with the international research project NanoSYNERGETICS - Photoactive materials with cooperative and synergetic responses, with Osaka University in Japan, and coordinated on the French side by Prof. Keitaro Nakatani from the Supramolecular and Macromolecular Photophysics and Photochemistry (PPSM) laboratory. L'ENS Paris-Saclay is also involved in the RHU ILITE project in collaboration with the international research laboratory LIMMS – Laboratory for Integrated Micro-Mechantronics Systems.

At the start of the day, H.E. Junichi Ihara talked with Prof Sylvie Retailleau and Prof Pierre-Paul Zalio, who presented the structure and inner workings of Université Paris-Saclay, the roles of component institutions, associate universities and national research organisations, and the strong links with the companies and R&D centres within the hub.

Following the initial discussions, the ambassador was introduced to the initiatives established at Université Paris-Saclay with Japan in the areas of artificial intelligence, sustainable energies and quantum technologies. Prof Nicolas Vayatis, director of the Borelli Centre, presented the local ecosystem in terms of artificial intelligence, namely the DATAIA convergence institute, that brings together expertise from a range of disciplines to develop cutting-edge research in data science and carries the strategy of the university in AI, research and education.

Likewise, the construction of an Institute for Sustainable Energy, presented by Dr Loïc Assaud from the ICMMO, aims to pool and establish structured actions around a key issue of society: energy. The institute relies on the renowned expertise of research teams (hydrogen, batteries, solar energy, energy transition), calls on the characterisation platforms of the ecosystem, as well as on the industrial and socio-economic fabric. Together, these players aim to build ambitious and innovative research programmes in favour of new collaborations.

Quantum technologies were also presented on this occasion, by Prof Jean-François Roch, professor at the LuMIn. The French strategy on quantum technologies was revealed on the Paris-Saclay campus by president Macron on 21 January. Pioneer of the 2nd revolution in this field, Paris-Saclay accounts for over 100 teams at the best international level, including 1 Nobel prize winner, 3 CNRS gold medalists, 9 CNRS silver medalists, and 34 ERC grant holders. Once again, the education programmes of the university are strongly backed by research and benefit from the proximity of major industrial partners such as Thalès, Atos, IBM and EDF, as well as access to leading platforms such as the Centre for Nanoscience and Nanotechnology.

The thematic focus ended with a links with industrials on campus. The university relies on the R&D centres of major groups to develop its training offering. The Paris-Sacaly hub includes one TTO, SATT Paris-Saclay, 6 incubators, a network of FabLabs, as well as the PEPITE PEIPS, a network of young entrepreneurs. Together, they contribute to the actions in terms of innovation, in connection with the university, and result, every year, in the creation of around 100 start-ups and around 350 new licenses. It is worth noting that the Japanese giant of optics and instrumentation, Horiba, opened its R&D centre on campus in 2012. In association with the developer of quantum sensors, Qnami, Horiba announced last July the launch of the Proteus Q, a microscope enabling in depth analysis of magnetic materials at the atomic scale.

Following the presentations and discussions, the ambassador visited two laboratories of the ENS Paris-Saclay, the Supramolecular and Macromolecular Photophysics and Photochemistry (PPSM) laboratory, where he met with researchers involved in partnerships with Japan, and the Laboratory of Mechanics and Technology (LMT), where members of the lab presented their work on mechanics and civil engineering using artificial intelligence, for the management of urban systems or for eco-sufficient materials. 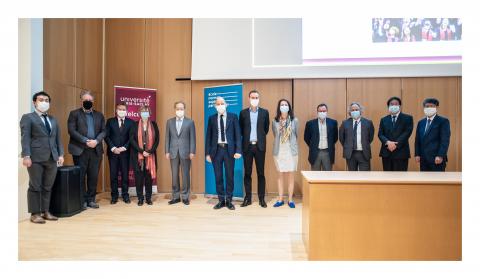 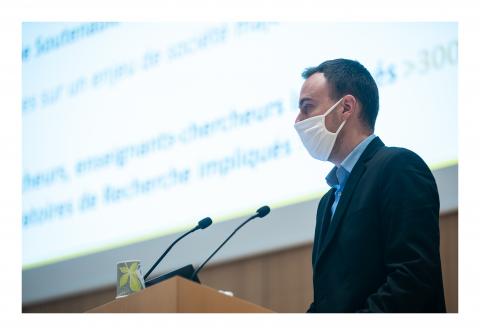 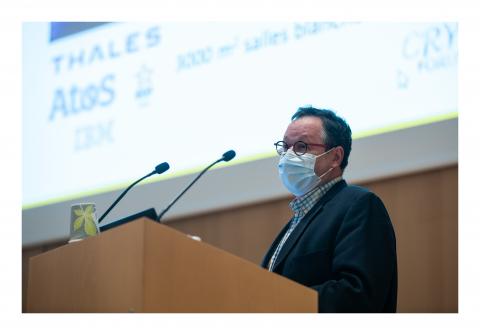 Prof Jean-François Roch from the LuMIn 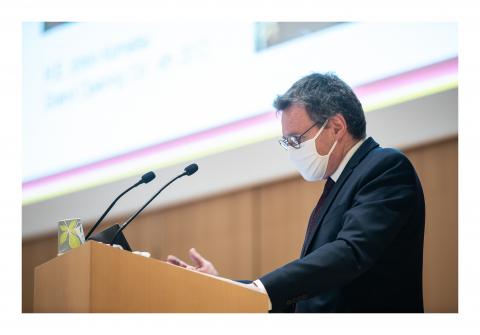 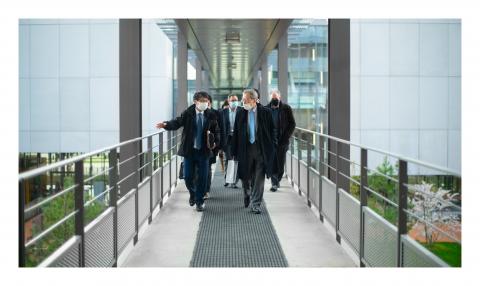 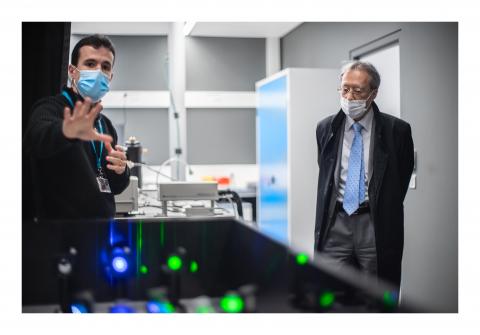 Presentation by Prof Bruno Le Pioufle at the PPSM 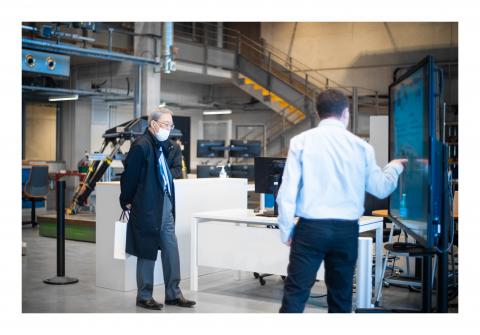