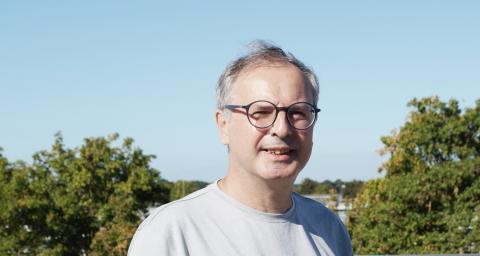 Yves Balkanski: From dust particles of the past to climates of the future

Yves Balkanski has been a researcher at the Laboratory for Sciences of Climate and Environment (LSCE - Université Paris-Saclay, CEA, CNRS, UVSQ) and the Institut Pierre Simon Laplace (IPSL) for the last 30 years. He specialises in studying the atmospheric aerosols that help us model the climate of the past and anticipate that of the future.

“The team I belong to is working on one of the two French “EARTH system” models, the other being that of the Météo France research centre. This model identifies the planet’s components that are used to describe the climate: atmosphere, surfaces and oceans. From simple equations relating to the movement and retention of energy, we can recreate atmospheric and oceanic flows. This gives us a better understanding of not only today’s climate but also that of the sometimes very distant past, going back several millions of years,” explains Yves Balkanski. “Our ultimate aim is, of course, to predict what the climate will look like 30, 100 or 300 years from now.” To that end, the team works in collaboration with other academic laboratories which provide it with “models”.

Surrounded by this multidisciplinary team, Yves Balkanski specialises in the atmosphere. The temperature and humidity levels of the atmosphere are influenced by tiny liquid and solid particles called aerosols which measure anything between about ten nanometres and a hundred or so microns. “We study their impacts on radiation. Since these particles are similar in diameter to the wavelength of light, they are very efficient at intercepting it. But they also capture the Earth’s telluric radiation and warm the atmosphere,” the researcher adds.

Dust particles and rainfall in the Sahel

Yves Balkanski takes particular interest in dust particles from arid regions and phases of intense drought such as the one that affected the Sahel in the late 90s. Understanding their cycle should help us to anticipate them. More specifically, the researcher is studying the influence of the iron oxides contained in these particles. Oxides are a minority component - between 1% and 5% of the particles’ mass - that absorb reflected solar radiation. By absorbing light radiation, the dust particles warm up the atmospheric layers, and several researchers have observed that they also trigger rainfall.

Survival of populations at stake

“It is vital to determine the causes of rainfall. While we are capable of forecasting temperatures, it is proving to be more difficult to predict rainfall, a significant issue for the populations living in these regions.” In the past, changes in the climate have been blamed on the levels and variations of temperature of our oceans. “We now believe that they are also influenced by two other factors: aerosol absorption and the role played by vegetation when its moisture evaporates during the monsoon season. The two-way influence between these two phenomena creates a “negative feedback” system in which the presence of vegetation becomes an obstacle.”

Travelling back in time

By observing deposits of dust particles in ice cores and seabed sediments, where they have remained for 19,000 years, researchers have established that the Earth’s atmosphere contained two to three times more dust particles at that time. “From the interactions between dust and temperature, and between vegetation and dust, we can deduce the different climates of a region, and those of the others. We think the icecaps played a “cheese grater” role; by expanding and withdrawing, they released at their surface various substances that were disseminated very widely... When we find these substances, we can trace their origins,” explains Yves Balkanski.

Yves Balkanski is one of the world’s most frequently cited researchers (HiCiSci -Highly Cited Scientists). He is surprised by this, but nevertheless happy to have won the trust of his “peers”. Is this proof of his skill? “A researcher typically unites all branches of science in the progress towards a discovery. I always wanted to be a researcher. It’s one of those rare occupations in which you spend a certain percentage of your time in a trance, whenever you realise that you’re pushing out the very boundaries of knowledge. There are very few professions that offer that!”

To young adults aiming to go into research, Yves Balkanski has no hesitation in recommending they set themselves ambitious goals as early on as their thesis years. “The choice of subject and the way it is handled are very important as they shape your entry into a scientific community and provide you with an opportunity to distinguish yourself. If you begin with an easy question, then chances are it has already been answered.” According to the LSCE researcher, a good researcher doesn’t necessarily have an excellent academic record. “What you need most are an unfailing desire to explain a phenomenon and good communication skills.” He also believes it is essential to make science accessible to the general public and to facilitate links with the industry through the recruitment of PhD graduates. These are the three factors that led Yves Balkanski to become deputy director of the Institut Pascal, a 100% Université Paris-Saclay entity at the service of research across all disciplines. “The visibility provided by Paris-Saclay is crucial.”