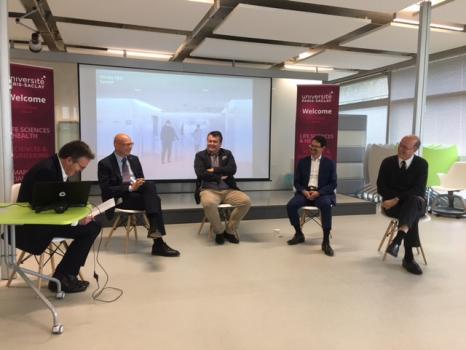 On 10 and 11 March, Université Paris-Saclay co-organised the meetings of the Enterprise & Innovation group (ENTE) of the LERU, League of European Research Universities. Bringing together 23 universities, the aim of the LERU is to influence the policies and promote the exchanges of best practices on the European stage. On the occasion of these meetings, the representatives of around 20 top European universities were able to discover the Paris-Saclay hub. 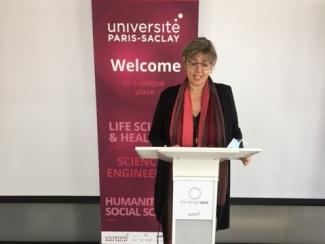 Opened by the president of Université Paris-Saclay, Sylvie Retailleau, the two half-days took place online, to the exception of the roundtable moderated by Michel Mariton, Vice-President Economic development at Université Paris-Saclay, on the link between universities and enterprises. The roundtable focused in particular on what motivates large groups to establish their R&D centres on a university campus. Filmed at the Design Spot, the roundtable involved representatives of the R&D centres of EDF, Horiba, Servier and Thalès, key companies of our territory.

Among the advantages of establishing on university campuses are the critical mass of excellent students and researchers, and the shared cost of big instruments and research platforms such as clean rooms. The proximity of laboratories also enables companies to be more in tune with the needs of this important market.

Not only do companies establish close links with researchers but also with new companies: B2B benefits hugely from streamlined interactions when distances are shorter. The R&D centres of Thalès, EDF and Horiba are a few minutes’ walk away from one another. The future Servier research institute, which should be inaugurated in 2022, will be located at the heart of the university campus, opposite the ENS Paris-Saclay and CentraleSupélec.