Thomas Deneux is a research engineer in the department of integrative and computational neuroscience (ICN) at Paris-Saclay’s Institute of Neuroscience (NeuroPSI - Université Paris-Saclay, CNRS). In parallel with his research, he created the company Learning Robots. His first product  is an educational robot named AlphAI that teaches artificial intelligence (AI). This entrepreneurial project is supported and funded by Paris-Saclay University. .

Thomas Deneux began his studies in mathematics at ENS Paris and pursued with a thesis in computer vision. Drawn to biology, he then decided to devote himself to neuroscience with post-doctoral studies in neurobiology in Israel. "During my thesis, I analysed brain imaging data. That encouraged me to learn more about the brain and experiment with neurobiology myself,” tells Thomas Deneux. “So, I went on to use imaging techniques to measure neurone activity in mice.”

He then decided to combine this experience with his knowledge in mathematics to advance biology. "My best work was in that area, so I wanted to develop mathematical methods for neurobiology," comments Thomas Deneux. As a result, he joined Paris-Saclay’s Institute of Neuroscience as a research engineer. Using his multidisciplinary approach to science, he moved on to the conception of artificial intelligence. Inspired by neurobiology and animal behaviour, he decided to develop a robot capable of assimilating tasks without being programmed for them. 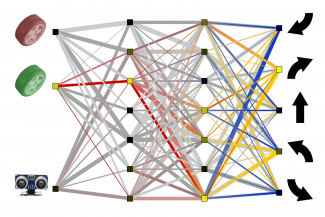 He designed a robot toy that uses artificial intelligence to gradually learn to move around a modular arena made of wooden boards without difficulty. Conscious of the educational potential, he decided to use his robot to teach the general public - especially young people - how artificial intelligence works. He then developed a graphical interface to open the AI “black box” and visually and intuitively expose the mechanisms of learning algorithms and artificial neural networks. AlphAI was born. The project is part of Université de Paris-Saclay’s dynamic approach to support innovation and technology transfer. In 2018, it was selected as part of the university’s Poc in labs programme for calls for pre-maturing projects.

The programme has funded and supported innovative projects initiated by the university’s laboratories and with strong potential for implementation every year since 2013. The aim of the Poc in labs programme is to grant funding to develop a project’s proof of concept. It also offers assistance for assessing a project’s economic and legal potential, and if necessary, the Design Spot can assist with design. Finally, the programme proposes a strategy for project development and implementation with startup assistance in the form of training provided by IncubAlliance. 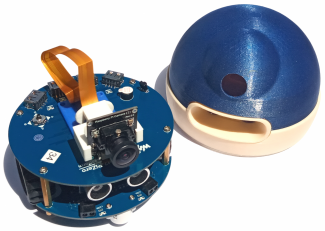 The plan to market the AlphAI creation has benefited from such assistance, with help from Paris-Saclay’s Design Spot. "It was clear that a design study was required because the product is a robot toy for a young audience," explains Vincent Créance, director of Design Spot. We started by designing the product - the robot. Then we worked on the startup’s logo and product packaging. We are already thinking about designs for future versions.” The entrepreneur and designers decided to create an almost spherical robot, and an arena made of pieces of wood that fit together to increase game possibilities.

With various sensors, including cameras and wheel-motion sensors, AlphAI familiarises itself with its environment and learns to move around the arena. Depending on the programming mode chosen on the graphical interface, it learns by trial and error to avoid walls or follow markings on the ground. Gradual changes in the robot’s behaviour are observed, and the user can adapt the graphical interface which represents the neural network of artificial intelligence. So far, the startup Learning Robots, created in April 2020 with the support of the French Ministry of National Education and Bpifrance, conducts robot demonstrations in classes or at trade shows on request. AlphAI is now on the market in France and internationally, and the startup expects rapid growth. 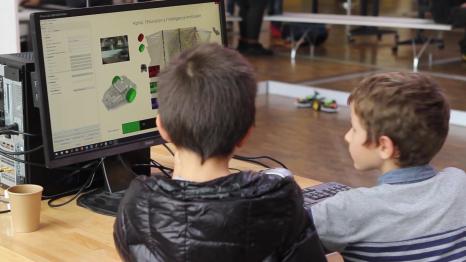 Thomas Deneux aims to inspire future generations with his playful and original approach to AI. “AI has become important in everyday life and will definitely be taught in schools. We need to develop new teaching tools now," comments the entrepreneur and researcher. Teaching younger generations about it early on will help them to assimilate AI and understand the ensuing technical and societal challenges. 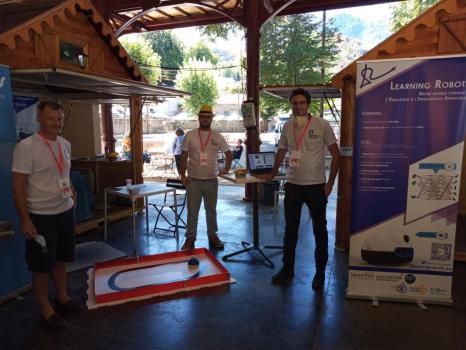