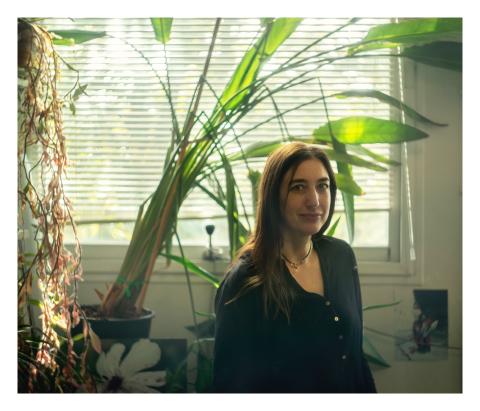 Tatiana Giraud, is a senior researcher at the Ecology, systematics and evolution Laboratory (ESE - Université Paris Saclay, CNRS, AgroParisTech), of which she is also the Assistant Director. She has recently joined the French Academy of Sciences. With a passion for evolutionary ecology, Giraud researches fungi, using them as models to understand how organisms evolve and adapt to their environment. Sometimes pathogens, sometimes used as food for their fermentation properties, mushrooms continue to shed light on the how living things work.

With her team, Tatiana Giraud studies fungal plant pathogens in natural and cultivated environments. "The goal is to understand how these parasites emerge, persist and specialise on their hosts, but also how the hosts resist them, and why the pathogen continues to infect them," says the researcher of the Ecology, systematics and evolution Laboratory (ESE - Université Paris-Saclay, CNRS, AgroParisTech). "There is a fungus for each plant: I study their co-evolution, which is key to understanding diseases that are growing in number."

Analysing fungi’s sex chromosomes also proves interesting. "They have remarkable similarities with those of plants and animals, and also teach us about evolutionary theory," says Tatiana Giraud. At the heart of her research is the Microbotryum violaceum, a fungus that makes various flowers sick: by producing spores in their anthers – instead of the pollen – it prevents the flowers from reproducing. Worse still, it spreads through pollinators.

Some good can also come of fungi mould. It can be used for example to make blue cheese. "We have discovered several ʻpopulationsʼ of fungi of the same specie as the one that make silage rot, which is used for animal feed. We investigated how these populations have adapted and tried to make blue cheese with silage populations. It was inedible!" says Giraud. She explains that as humans selected fungi to make the best cheese, it made them change genetically. That is what we call domestication. "This is a very good model for understanding the evolution of living beings, since domestication occurred very recently and has undergone a major selection process.

By studying the fungi’s genome, Tatiana Giraud’s team soon identified two types of populations selected for the production of blue cheeses: one is identical in all blue cheeses across the world, and the other is found only in Roquefort in France! Why is Roquefort so unique? "The explanation lies in the ‘protected designation of origin’ (PDO), which protects this fungus’ genetic diversity. Producers are required to use local strains, while elsewhere the same clone is used for all other blues cheeses", explains the Giraud, who has recently published an article on the subject. An area of research that opens unexpected applied perspectives: "We can cross-reference the two different populations to produce new cheese!"

Graduating from AgroParisTech in 1995, Tatiana Giraud obtained a master’s degree from the university and completed an internship at the ESR laboratory. This was the turning point. "Evolutionary biology gave meaning to everything, I got the answers to the questions I always asked." In 1998, Giraud defended her thesis on grey mould on vines. After an initial post-doc in Switzerland on invasive ants, in 2000 she returned to the ESE Laboratory to complete a second and was recruited as a CNRS research fellow.

Sharing the challenges of biodiversity

Tatiana Giraud joined the French Academy of Sciences in December 2019, gaining attention no doubt thanks to the achievement of the Grand scientific prize of the Louis D Foundation in 2017. This time, it is about "promoting science in general and advancing the science of my field in particular," Giraud is pleased to announce. "It is important to raise awareness of the issue of ecology." Giraud is now a professor at the Ecole Polytechnique and welcomes the fact that "students are becoming increasingly keen to gain knowledge on this subject." And while becoming a researcher now seems more difficult than before, she is encouraging her PhD students: "to make their passion their life, it's just great!" Giraud concludes.