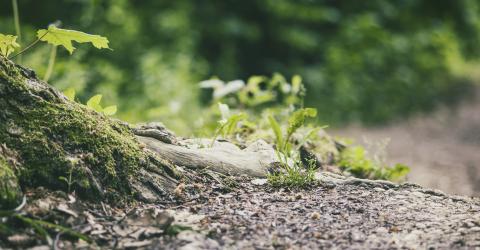 Stéphane Bazot: understanding the ecology of the plant-soil system

Stéphane Bazot is a lecturer working at the Ecology, Evolution and Systematics laboratory (ESE – Univ. Paris-Saclay, CNRS, AgroParisTech) and is Deputy Assistant Research Director at the Biosphera Graduate School of Université Paris-Saclay. This specialist in the function of carbon and nitrogen in the plant-soil system has been interested throughout his career in ecosystems ranging from grasslands to vineyard stormwater basins, forests and even golf courses!

Stéphane Bazot has been interested in plants for as long as he can remember. “I remember as an adolescent experimenting with seedlings in my garden or trying to pollinate – without much success – tulips,” says the lecturer. It was therefore not surprising that once he had completed his scientific baccalaureate, he decided to focus on plant biology. Following a Master's degree in population and ecosystem biology, during which he discovered an interest in the integration of living organisms on a larger scale, his focus turned to research in agronomy and ecology. “I studied for a DEA (Advanced Studies Diploma) at the École Nationale Supérieure d’Agronomie et des Industries Alimentaires (National School of Agronomy and Food Industries) in Nancy. During my DEA, I did a work placement at INRA in Dijon, where I worked on the hybridisation of genetically modified oilseed rape with related wild species in the field. After this, I went on to do a PhD at the INRA laboratory in Nancy on carbon and nitrogen flows in grassland ecosystems,” explains the lecturer. He then became a temporary lecturing and associate professor at the University of Strasbourg where he studied the flow of nitrogen in forest soils. He was then offered a post-doctoral fellowship at the Université de Haute Alsace in Colmar. “Here, I was able to enrich my range of skills by focusing on the characteristics of microbial communities in the soils of vineyard stormwater basins,” explains Stéphane Bazot. After this experience, he was recruited in 2007 as a lecturer by Université Paris-Sud where he joined the Ecology, Evolution and Systematics laboratory as part of the Plant Ecophysiology team. Stéphane Bazot is now Deputy Director of the ESE laboratory.

Stéphane Bazot is not one of those researchers who likes to stay shut away in the laboratory. “Throughout my career, I’ve always been interested in studying living organisms in their environment and therefore in conducting experiments within natural ecosystems,” he explains. After having studied the effects of an increase in CO2 concentrations in the atmosphere on grasslands in Switzerland during his PhD, and microbial communities in the soils of vineyard stormwater basins when he was in Colmar, he decided to focus on forest ecosystems together with the Ecophysiology team when he joined Orsay in 2007. “Over the past fifteen years, I’ve led numerous research projects on different experimental sites, such as the Barbeau forest, where there is a huge tower which measures the CO2 exchange between the forest and the atmosphere, or the forest of Fontainebleau, where I’ve studied the decline of beech trees.” Since 2018, driven by the desire to combine functional ecology and evolutionary ecology, he is now studying the phenotypic plasticity and genetic adaptation of wild apple trees to climate change in orchards. “On a completely different topic, more recently I was also asked to work on the optimisation of the growing media used for the Golf National in Guyancourt,” he adds.

Considering the link between vegetation, soil and micro-organisms, with the soil as the common denominator

Another constant in Stéphane Bazot’s career is his desire to include the issue of soil in most of his research. “In our field, soil has been seen for a long time as a sort of black box. We now know that it’s an essential component for life. It’s a support and reservoir of nutrients for plants, as well as a water filtration system. It alone is home to over 25% of the known biodiversity of our planet! A teaspoon of soil contains over 200m of mycelial strands and 1 million bacteria! This is why I’ve always sought to conduct research on plant-soil ecosystems by including soil in considerations about the management of various environments,” explains the lecturer. This is also why he has encouraged including the soil in the research in forests on carbon and nitrogen flows in the plant-soil system being carried out by the plant ecophysiology team to which he belongs. “From 2015, together with other national and international laboratories, we’ve conducted new research projects on the characteristics of the flow of organic matter from plants to the soil and also on the structural and functional diversity of microbial communities in forest soils,” he adds.

Teaching by involving students in the field and in project work

While he was still a young PhD student, Stéphane Bazot started to teach soil science and plant biology to first and second year DUT students. This important experience persuaded him to become a research professor. “I enjoyed the contact with students right from the start – the satisfaction of passing on my knowledge about science and seeing that spark of interest in their eyes,” he remembers. He became a lecturer at Université Paris-Sud in 2007, where he taught both on the Bachelor's and Master's courses. He quickly became involved in setting up new courses (particularly on plant-soil relations, which was the subject of his research) and in accompanying fieldwork. He gradually took on responsibility for more teaching units, including several in the field (based in the Vallée campus in Orsay, the forest of Fontainebleau and even the Brocéliande forest in Brittany), before taking on responsibility for the Biodiversity, Ecology, Evolution Master’s track in 2015. Over the course of these experiences, he developed a project-based approach to teaching. “I’m absolutely convinced about the benefits of an education which involves students in actual projects. That’s why I like them to work wherever possible on real projects resulting both from research work and from requests from professionals in the environment and biodiversity management sector. Really finding out about a profession, whether it’s that of a researcher in ecology or an ecologist in a company, requires some practical experience,” he adds.

In 2018, as the discussions on the creation of the Graduate Schools of the future Université Paris-Saclay were taking place, Stéphane Bazot decided to become involved in the working group on life sciences. In 2021, this work resulted in two Graduate Schools with a focus on life sciences. These are Life Science and Health and Biosphera, of which Stéphane Bazot became the Deputy Assistant Research Director. “I wanted to become involved with this Graduate School straight away as I was particularly interested in the willingness to consider living organisms as a part of their environment. This was shown by the fact that room was made for all the key players involved in research in this area on the Paris-Saclay campus. I’m now delighted to be working with researchers involved in ecology, agronomy, animal sciences and plant sciences, etc. I’m sure that the exchange of ideas taking place in our community will result in exciting, new partnerships,” says Stéphane Bazot in conclusion.