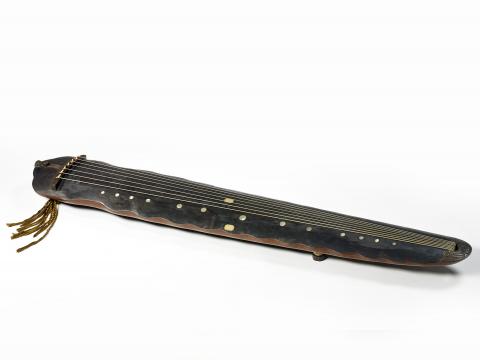 During a visit to the Museum of Music (Paris), when observing an ancient qin zither, there is a good chance that you will hear the echo of the past sounds of this rare Chinese musical instrument. However, if you listen closely and examine it a little further, it is the work of a team of researchers, in particular those from the Laboratory for Sciences of Climate and Environment (LSCE – UniversitéParis-Saclay, CEA, CNRS, UVSQ),  about this instrument with a mysterious history and secrets to be revealed. What is it made up of? How old is it? All these questions are explored in their research, underpinned by the same theme: preserving the cultural value of the object that produces the melody we hear.

Since 2015, the Museum of Music has allowed us to admire an extremely rare object: an ancient zither, or qin, which is a traditional musical instrument with roots in Chinese culture. As much a work of art as it is an instrument, this Qiulai is a wooden zither with seven silk strings. Its origins are still a mystery; since the instrument was found in 2012 in the acoustic collection at the Conservatoire national des arts et métiers (Cnam), its provenance has not yet been determined with certainty, raising the question of its authenticity. Using an interdisciplinary approach, Marie-Gabrielle Durier and Christine Hatté from the Laboratory for Sciences of Climate and Environment (LSCE – Université Paris-Saclay, CEA, CNRS, UVSQ), and their colleagues from the Conservation and Research team at the Museum, they sought to highlight the object’s components to confirm available knowledge on qins, which is mainly derived from ancient poems and oral tradition that survived the Chinese Cultural Revolution. With the help of carbon-14 dating, the team also sought to determine the age of the instrument, dating back to the late 17th century, to confirm the authenticity of the qin that was found.

It is not only a historical musical instrument, but also an object of art in its own right; several factors make this qin a valuable object. While its authenticity had yet to be confirmed, the team soon faced a major problem. Authentication research using carbon-14 dating required taking a sample of the object’s material, leading to the challenge of preserving the instrument’s visual integrity and playing qualities. “At the Museum of Music, 5% of the instruments on display are restored to playing condition and combined with a soundtrack. The instrument being observed is what our ears hear," explains Christine Hatté. It is for this reason that the Museum of Music favours non-invasive techniques, such as those that do not involve removing any part of the object, and non-destructive techniques, which do not alter the material being studied.

The team focused its analysis on the varnish on the surface of the instrument. While maintaining the material integrity of the Qiulai is one thing, finding a method of processing the material in a way that is consistent with carbon-14 (14C) dating is another. Dating is based on measuring the 14C that is found in minute proportions in an organic sample. This unstable isotope, which is the only radioactive carbon isotope, decays over time at a regular rate into stable nitrogen isotopes. The proportion that is still present at a given time makes it an ideal ‘stopwatch’ for estimating the age of the sample. Nevertheless, there are difficulties with this technique, especially when applied to small samples, in that there is a risk of affecting or losing some of the total amount of original carbon in the sample. Yet some sampling methods are likely to contaminate it. This is the case with solvents that are frequently used by conservators, which are filled with petroleum-based carbon, for example. The rarer practice of collecting a powdery sample with a tape creates the same type of problem. The research team’s solution was to use a micro scalpel, a binocular microscope, and a UV lamp. These micro-scalpels helped to remove, layer by layer, lacquer from the instrument, after which each one can be 14C dated. Here, this was a layer of underlying black lacquer and a layer of red surface lacquer.

The 14C dating technique is quite different from archaeological work in that there is no single interval of possible dates, but rather “several ranges of dates that can be matched”, explains Marie-Gabrielle Durier. To narrow down these intervals, experts draw on knowledge about the object from other disciplines. For the qin, the chemical characterisation of the instrument’s materials and the analysis of iconography and Chinese literature have a joint role. While the team found malachite and bone char in the instrument’s lacquer (black lacquer), poems provided information as to why this was the case: the bone char corresponds to the use of deer antlers in making the qin, and the malachite corresponds to crushed stones that were used to achieve symbolically ideal acoustic qualities. Ancient literature also explains why the wood of the instrument is much older than one of the components of the lacquer (red lacquer) and the silk strings that make up the strings of the instrument. According to poems, the quality of the sound comes from the spirituality acquired by the wood before it was used to create the qin. This explains the choice of an older wood that most likely came from a temple.

What story does the qin tell?

The team’s findings suggest that the Qiulai qin was made between 1659 and 1699 CE. These findings confirm the historical and anthropological value of the instrument as well as its authenticity. Based on this research, the Cnam can legitimately claim to have one of the oldest qin in Europe. At the same time, if confirmed, this would be a cultural asset for China, where the qin is legendary. “It is the equivalent of Stradivarius violins,” explains Marie-Gabrielle Durier.

Does this mean that everything has been said about this instrument? “No!,” reply the LSCE researchers in unison. There are still many mysteries to discover, some of which go beyond the experimental sciences. While many cultural exchanges took place between France and China during the Enlightenment, it is said that a Jesuit priest and missionary in Beijing, Joseph-Marie Amiot, sent traditional Chinese musical instruments to Europe, including a qin that has not been found to this day. Could it be the one found at the Cnam? For the meantime, no one knows. The investigation has not finished.