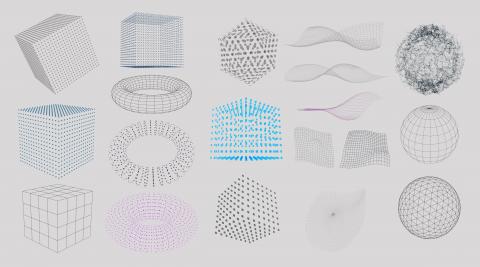 Pierre Pansu: A geometrician of hyperbolic spaces with a passion for disseminating knowledge

Pierre Pansu is a professor at the Laboratory of Mathematics, Orsay (LMO - Univ. Paris-Saclay, CNRS) and a specialist in the exploration of new geometric spaces. He is director of the Mathematics Graduate School at Université Paris-Saclay and also holds many other leadership positions in which he works on developing the appeal of mathematical sciences.

Pierre Pansu was born in Jura and studied at the ‘École normale supérieure’ in Paris. He completed his PhD at Université Paris Diderot in 1982 under the supervision of Marcel Berger. His thesis focused on the geometry of Heisenberg groups, a space which differs from the Euclidean system generally used in the physical sciences. “The geometry I practice is an extension of the non-Euclidean and hyperbolic geometry (where there are an infinite number of parallels passing through a single point) discovered in the 19th century. Since then, it has been found that pure and applied mathematics lead to questions of a geometric nature in a wide variety of spaces.” This work led to Pierre Pansu being taken on by the CNRS in1983 and he passed his ‘Habilitation à diriger des recherches’ (authorisation to direct the research of others – a post-doctoral degree) in 1987. He then joined Université Paris-Sud (then Université Paris-Saclay) as a professor in 1990.

Pierre Pansu is trained in differential geometry which is a branch of geometry strongly influenced by the theory of general relativity. This states that space-time is curved by the presence of matter. This involves achieving geometry in a world where light rays, or objects, have non-rectilinear trajectories. He consequently turned to the geometric theory of groups introduced by Mikhail Gromov, a professor at the Institute of Advanced Scientific Studies (IHES) and winner of the Abel prize in 2009. The worlds explored in this field resemble paving (or tiles). Pierre Pansu developed an isoperimetric theorem for this in 1999. In the simplest case, it involved understanding why some materials naturally occur as flat faced polyhedra. This physico-chemical related question reflects a problem of geometry. Pierre Pansu discovered that when a crystalline material, whose atoms form a periodic arrangement, is cut through on a plane, it re-grows in directions where it can re-find its structure. The professor concluded that it is this anisotropic quality which naturally generates the facets seen on the materials he was studying. “This problem seems simple, but my theorem is still only a partial answer. Perhaps the solution will turn out to be simple too!"

This field of study also allows links to be made with theoretical computer science, which manipulates finite structures, such as arrays or programs. “This new space, which has created bridges between these two worlds, remains underdeveloped in France. My field, however, interests researchers in the United States, India and Israel.” By identifying the geometric properties of computer models, it becomes possible to understand the limitations of existing algorithms and to devise new ones. “This is long-term work, but I’m certain that it will pave the way for the success of theoretical computer science in the 21st century."

Leadership of the LMO

In 1998, Pierre Pansu was appointed Director of the newly-created Laboratory of Mathematics, Orsay (the result of the merger of five research units). The aim of this cluster is to increase the visibility of mathematics within the university, to influence its decisions and to share equipment and personnel. “We have now reached a critical mass which is comparable to that of the large physics or biology laboratories on campus.” The professor is seeking to develop a cross-disciplinary approach by creating links with biology.

Pierre Pansu took on the management of the Doctoral School of Mathematics for the Paris-Sud region (now part of the Université Paris-Saclay Hadamard Doctoral School of Mathematics) in 2005. This gave him the opportunity to examine the trends in students’ choices of future careers in order to adjust the institution's strategy. He noted that most students went on into academia. “At that time, there were many jobs and re-appointments available in mathematics laboratories, and the school supplied the whole of France.” However, few went into industry, “Except at the time of the Internet bubble in the early 2000s, when many PhD students were recruited by financial firms and then by the GAFAs, sometimes to positions of very high responsibility."

The management of courses at the ‘École normale supérieure’ in Paris

In 2009, the professor took on the management of mathematics courses at the ‘École normale supérieure’ in Paris where he directed the courses, programmes and teaching content. Among other things, he was committed to promoting the practice of mentoring so that students could choose the most suitable future directions for their career and the most attractive areas to study. “This approach was very effective in getting the best out of the young people who would shape mathematics in France."

The Vice Presidency of the French Mathematical Society

With his long experience of mathematics education and dissemination, Pierre Pansu was elected Vice President of the French Mathematical Society in 2011, where he is now responsible for initiatives aimed at the general public. This involves promoting activities where mathematicians can pass on their enthusiasm to the general public. “I was delighted to take up my pilgrim's staff and travel around France to lead a large network of regional representatives.” He is increasing contacts with associations active in the field, in particular the Association of Teachers of Mathematics in Public Education (APMEP), and pays homage to the recognition that the academic world gives to mathematics teachers. “I’ve met teachers who are doing amazing things in their classrooms. Their work is not easy at all and we want to encourage them in what they’re doing. "

The management of the ‘Fondation mathématique Jacques Hadamard’

Pierre Pansu also took on the management of the 'Fondation mathématique Jacques Hadamard' (FMJH) in 2015. The FMJH was born out of a desire to build on the excellence in mathematical sciences present on the Saclay plateau in order to prepare for the creation of Université Paris-Saclay. “I took on the mantle of my predecessors, who had merged all the mathematics masters on campus into a single course, as well as all the doctoral schools.” In particular, he initiated support for the facilitation and dissemination of scientific culture in the region and set up an international exchange programme for PhD students.

The management of the Mathematics Graduate School

In 2020, Pierre Pansu became director of the Mathematics Graduate School at Université Paris-Saclay, which comprises twelve laboratories and a scientific community of around 700 people. He aims in particular to maintain the level of excellence in the subject, to facilitate the integration of young PhD students, to improve the quality of the reception of international students, to attract new talent to the field (in particular more women) and to encourage them to pursue a career there. He is also looking to strengthen the mentoring system which has been so successful at ENS and FMJH. “The Graduate School’s chief asset is the quality of its students and I intend to see this reflected in the increasing attractiveness of our teaching and research positions."