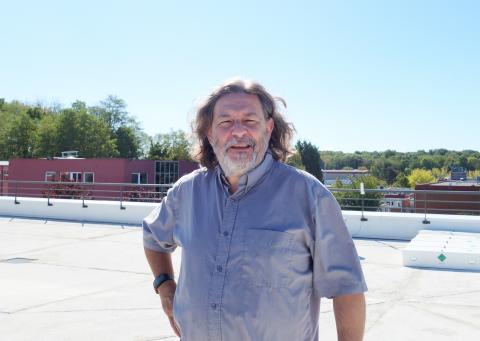 Nicolas Viovy: How biodiversity helps the fight against climate change

Nicolas Viovy is a researcher at the Laboratory for Sciences of Climate and Environment (LSCE – Université Paris-Saclay, CNRS, CEA, UVSQ). He models the carbon cycle of the Earth’s biosphere and has made ecophysiology his speciality. He has contributed over the years to multiple European and international research programmes, including the Global Carbon Project.

Initiated by his father, a professor at ENS Saint-Cloud, Nicolas Viovy was immersed from an early age in a family environment that encouraged his decision to go into research. “Like Obelix, I started as a child, because we lived in accommodation provided with my father’s job and which adjoined his laboratory.” Despite his passion for biology, he eventually chose information technology which also greatly appealed to him. After his master’s at Université Pierre & Marie Curie, his profile won him a place at the ENSEEIHT in Toulouse. In his final year as an engineering student, he did his internship at the Centre d’Etudes Spatiales de la Biosphère  (Centre for Space Studies of the Biosphere CESBIO - CNRS, Université Toulouse Paul Sabatier, IRD), again in Toulouse. There he was able to reconcile his two passions by studying the space-based remote sensing of vegetation. The young engineer went on to write a thesis on the satellite-based characterisation of vegetation evolution, then took a post-doc position in the same laboratory before being recruited by LSCE in 1993.

Will vegetation continue to play its role as a carbon sink or, on the contrary, will this carbon sink eventually become saturated? Through his research, Nicolas Viovy aims to answer these questions. As a member of a multidisciplinary team studying continental surfaces at LSCE, he analyses the carbon cycle aspects of vegetation while contributing to the development of a model named ORCHIDEE (ORganising Carbon and Hydrology In Dynamic EcosystEms). “This Dynamic Global Vegetation Model (DGVM) allows us to simulate the way in which vegetation reacts to the climate. From various climate parameters, the CO2 concentration in the atmosphere, and data relating to the surface and vegetation, the model simulates carbon production rates, carbon sources and carbon sinks, on the basis of vegetation’s inherent processes. In particular, we are studying how plants distribute the photosynthesis process to their different organs, until it decomposes into the ground under the action of micro-organisms.”

ORCHIDEE has become more complex over time and now goes beyond the issue of natural vegetation. In close cooperation with INRAE, the model also simulates the main agroecosystems, taking into account the way in which these are managed. All parameters must be included: arable crops, the role played by animals grazing on grasslands, and forest management, to name just a few. “For example, this helped us to more accurately simulate the carbon sink of the European forests which, in reality, relies on the young age of these forests,” the researcher adds. “It also enabled us to tackle issues relating to agriculture, in a way that rather complements the work of INRAE.”

“2018, 2019, 2020: since temperatures were first recorded, we have never known a succession of droughts like this in Europe,” states Nicolas Viovy. “Although their carbon reserves and ability to tap into deep groundwater make trees very resilient, satellite data is revealing some fairly high mortality rates. We know that xylem embolism is one of the major reasons for this. Plants carry water through very fine ducts in the xylem. In a drought, air bubbles form (embolism), preventing the ducts from functioning and causing the tree to die. We are seeking to represent this phenomenon as accurately as possible.”

Another of the model’s limitations is that it insufficiently reflects the role of biodiversity. Yet this is of great importance to ecosystems as it influences their capacity to optimise the resources at their disposal. This is true for a given species or for an ecosystem of different species. “We are trying to find out whether ecosystems are able to adjust better than we think or if, on the contrary, the phenomena observed have already gone beyond the point of no return. The ecosystem response to climate change is still a primary research issue,” the researcher says.

“I never imagined for a second that I’d become a HiCiSci member!” Nicolas Viovy exclaims, happy to admit that the very themes of his research ensure wide exposure. He especially enjoys their multidisciplinary nature - “It’s at the forefront of a discipline that we have to innovate” - and the interest shown by the public at large. In high demand from the media, Nicolas Viovy is happy to answer their questions, considering this to be part of his role as a researcher.