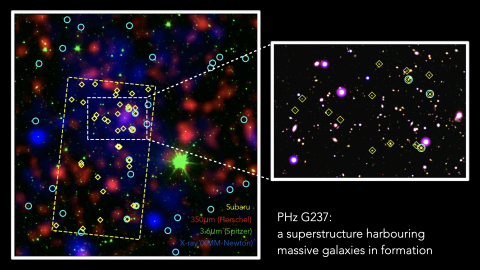 An international team of astrophysicists has reported the discovery of a structure, or ‘protocluster’, dating from the most active epoch of the Universe ten billion years ago, and which is expected to develop into a galaxy supercluster. The team includes scientists* from Université Paris-Saclay, the French National Centre for Scientific Research (CNRS), Université de Toulouse III – Paul Sabatier, Aix-Marseille Université and Université Claude Bernard de Lyon. The protocluster has been observed intensively forming stars at a high rate that is not currently well accounted for by current models.

Galaxy protoclusters are groups of very young galaxies that are bound together by gravity and create the largest known gravitational structures - galaxy clusters in the nearby Universe. Understanding how these structures form could prove crucial in comprehending the history of the Universe. The results of the work led by this international team of experts have been presented in two articles, and provide key information on the properties of this protocluster, known as PHz G237.01+42.50 (or G237 for short), and its galaxy members.

G237 is the first spectroscopically confirmed protocluster taken from a sample of over 2,000 candidates detected by Planck, the ESA (European Space Agency) satellite which was launched in 2009 to study the cosmic microwave background.

This galaxy protocluster is destined to evolve into a complex cosmic system similar to the Virgo Supercluster, a major structure in the local Universe of which our galaxy, the Milky Way, is a member. Planck observations have hinted at a protocluster with a prodigious star formation rate that is 10,000 higher than that of our Galaxy.

Additional observations carried out with several ground and space-based telescopes, including the ESA Herschel satellite, have confirmed its association with two high concentrations of galaxies. Both are expected to collapse in approximately 10 billion years into a galaxy cluster with a dark matter halo mass of 500-600 trillion solar masses, i.e. the equivalent of the largest galaxy clusters today.

“The 38 galaxies identified with the MOIRCS instrument on the Subaru Telescope are the least dusty star forming galaxies in the protocluster, but there may be many more members that were missed by our optical selection,” said Dr Y. Koyama, the lead author of one of the two studies.

“We estimate that the total star formation rate in the protocluster is remarkably high; at least 2,200 solar masses per year, and probably twice as much, based on the estimated number of galaxies hidden by dust and that were missed by the optical observations but which can be detected in infrared,” said Dr Mari Polletta (INAF & IRAP), lead author of the second study.

“Planck detected these protocluster candidates from space about a decade ago. Confirming and studying them has required time, numerous observations with other telescopes, and hard work from researchers and students,” explained Prof Hervé Dole, astrophysicist at the Institute for Space Astrophysics (IAS – CNRS/Université Paris-Saclay) and co-author of both studies.

“It is a great achievement to actually see one of these protoclusters studied in detail. Nonetheless, many questions remain unanswered as they challenge the models of their formation and our understanding of star formation in the most massive dark matter haloes of the early Universe. The European cosmology space mission, Euclid, which is set to be launched in 2023, will also help us to study these structures and find more, with the hopes of deriving more general laws than just those based on a few unique cases.”

Additional observational campaigns are currently underway on other Planck protocluster candidates. These initial results are part of a larger project aimed at understanding the assembly of massive structures such as protoclusters, the mechanisms behind their prodigious star formation rates, and the interplay between the dense environment and the rapid evolution of the galaxies that inhabit these large dark matter haloes.