Mathematics applied to the oceans

Surging waves are at the origin of the most destructive natural disasters in history and cause a great deal of material and human damage. In order to predict the risks, Frédéric Dias and his team at Centre Borelli (Université Paris-Saclay, CNRS, ENS Paris-Saclay) are modelling ocean waves in real time.

26 December 2004 is a date forever marked by one of the most devastating events in contemporary history. This is when the Indian Ocean tsunami occurred, which struck the coastline and resulted in at least 250,000 people going missing. Oceans are sometimes dangerous places, as illustrated by this disaster. Mathematical modelling is a highly effective tool when faced with their unpredictability and can compensate for our powerlessness.

Frédéric Dias is a professor at the Centre Borelli (Université Paris-Saclay, CNRS, ENS Paris-Saclay) and a specialist in ocean wave modelling. He has been on secondment to University College Dublin, Ireland, for 12 years and is interested in extreme ocean events such as storms and tsunamis. “It is a subject which is close to my heart and whose starting point was the Papua New Guinea tsunami of 17 July 1998, which I witnessed from New Caledonia,” explains Frédéric Dias.

His models, constructed using a mathematical code, simulate the way extreme waves submerge the earth's coasts. By using the physical parameters of the phenomena, his team is able to improve the prediction of marine flooding in particular. Eventually, these new methods will be used by warning centres.

Nevertheless, the key challenge remains of executing any realistic modelling in next to no time. In the case of tsunamis, the simulation must be rapid and performed as soon as the earthquake or landslide causing the phenomenon is detected. “A tsunami travels rapidly - at the speed of an aeroplane, between 700 and 800 km/hour. As we have little time to make precise calculations which require a lot of time, we are developing tools to accelerate our forecasts in real time,” explains Frédéric Dias.

To reduce the time needed to obtain these calculations, the team simplifies the mathematical code used by removing certain physical parameters from the equations. However, this procedure makes the code less realistic. As a result, it is a question of finding an optimum speed while preserving enough parameters to match the physical reality of the phenomenon. “We have to juggle complexity with the speed of the calculations,” admits Frédéric Dias.

These parameters include a large amount of data describing the origin of the phenomenon (underground for most tsunamis or in the air for storms) right up to the point the coastline is inundated. They depend on the topography (the shape of the coastline) and bathymetry (the shape of the seabed) of local areas, as well as on coastal urban infrastructure. “A breaking wave can be amplified by the type of coastline it encounters and the slope of the sea floor. For example, the tsunami in 2004 spared some of Thailand's coasts, while a few kilometres further on entire regions were devastated,” explains the researcher. Obviously, a magic code which is applicable to coastal regions around the world unfortunately does not exist, and modelling must take into account local data which is difficult to access.

To collect this valuable data and test the accuracy of its simulations, Frédéric Dias’ team works with the Centre d’alerte aux tsunamis (CENALT - Tsunami Warning Centre) which manages tsunami forecasting in mainland France and Ireland. They test their codes by modelling historical disasters which took place in the Mediterranean and Polynesia, and then test them in real life on the Irish coast. “These new tools have made it possible to predict the risk of submersive waves of up to four metres in height in Ireland,” points out the researcher. 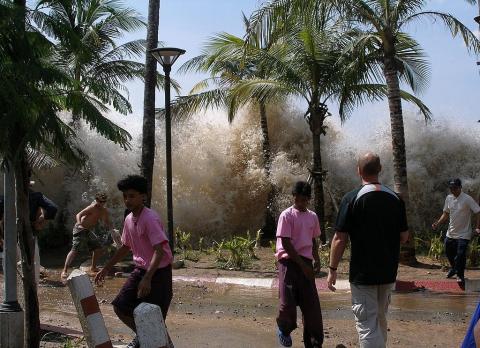 Better understanding to better predict the breaking of waves

The formation of extreme waves remains a mystery, although they are being increasingly studied. To get a clearer picture, Frédéric Dias set up the HIGHWAVE project in 2019. Financed by the European Research Council (ERC) for five years, its goal is to explain how and why a wave surges.

However, in order to study extreme waves, you must first be able to observe and measure them. To this end, researchers are gradually equipping the island of Inis Meáin in the heart of the Irish Aran archipelago with various sensors (beacons, radars, seismometers and cameras). Using data recorded in real time, scientists are developing a new mathematical model capable of simulating single wave surges. “Before HIGHWAVE, prediction methods partly failed to model a surge phenomenon, which requires complex studies of the water and the air bubbles in the foam,” says Frédéric Dias.

Apart from providing a better understanding of how breaking waves are formed, HIGHWAVE is also studying the effects of these waves on maritime infrastructures and coastlines. Frédéric Dias’ team can chart the movement of massive boulders. An example of this is a 620-tonne block found at a distance of 220 metres and a height of 26 metres, partly as a result of experiments carried out in a swell channel at “École centrale Marseille”. This gives a good sense of the extreme power of waves! The team is also carrying out further research on the transport of smaller rocks (1 kg) and their danger to submerged infrastructures, such as tidal turbines.

Frédéric Dias, who places particular importance on talking about science to the local population, regularly shares his work with the islanders, who he is always keen to recruit. At a public meeting, one of them “expressed a desire to see this project continue in order to take full advantage of the potential of the infrastructures which have been developed.” Since then, the researcher has been considering transforming these infrastructures into an international research station. 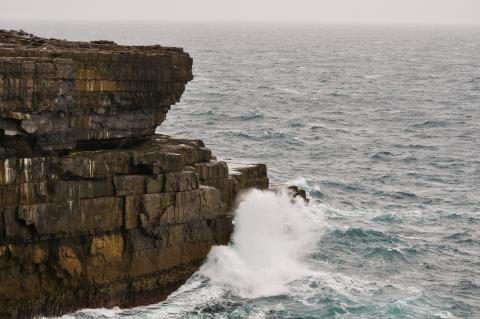 With powerful waves breaking over the Irish coast during winter storms, the island has great potential for generating electricity from wave power. In addition, recent energy converters (Wave Energy Converter or WEC) are now capable of converting the driving energy of the waves into electricity. The WEC Oyster, developed a few years ago by the company Aquamarine Power (before being abandoned) and the WEC S3 currently being developed by the company SBM Offshore are typical devices. While the first comprised a flap fixed to the seabed which oscillated with the swell, the second comprises a flexible tube equipped with electroactive polymer which floats on the surface of the ocean. Both use the movement of the waves to generate electricity.

Frédéric Dias is hoping to optimise the design of these systems. To do this, he evaluates their efficiency by modelling the maximum electrical power generated by the converter. In particular, he has studied the interaction forces between the converters and the water to predict the movements of the devices, as well as the maximum wave energy absorbed by the converters.

Frédéric Dias is currently pursuing this project alongside his research in Ireland. He will soon start a new research project in collaboration with the company SBM Offshore for the development of the WEC S3.