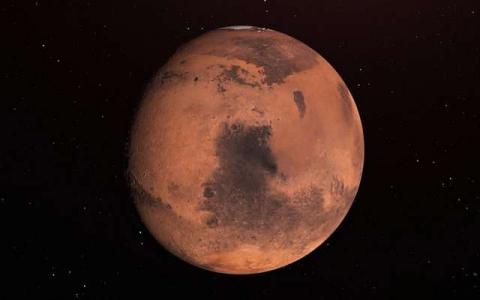 The highlands of the southern hemisphere of the planet Mars are considered to be homogenous land whose origin dates back more than four billion years. A team of French and American planetary scientists led by Sylvain Bouley (GEOPS -University of Paris-Saclay/CNRS), involving researchers from the University of Toulouse, Paris Observatory and the University of Nantes, of the Development Research Institute, the National Museum of Natural History (MNHN), the University of Arizona and the California Institute of Technology (Caltech), has just uncovered a singular piece of crust within these "highlands".

This crustal block extends over a vast area, equivalent to one and a half times the size of Europe. Its geophysical and geochemical properties evoke those of the Earth's continental crust and suggest the possibility of a continent hidden beneath the surface of Mars. This work is published on 6 January 2020 in the journal Nature Géoscience.

The team of geomorphologists, geophysicists and geochemists has applied a technique to discover for the first time the structure of the Martian crust before the formation of the main impact basins (Hellas, Argyre, Isidis and Utopia) and volcanic provinces (Tharsis and Elysium). The data are mainly derived from topographic and crustal thickness maps of Mars made from measurements of the gravity field of Mars. 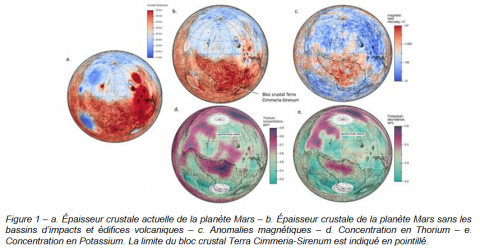 By removing the effect of impact basins and volcanic edifices on the crust, the crustal thickness map reveals a block with singular properties in the Terra Cimmeria-Sirenum area (Fig. 1b). The crustal thickness in this region exceeds about 50 km and the strongest magnetic (Fig. 1c) and geochemical (Fig. 1d and e) anomalies are found.

On Earth, such magnetic anomalies are observed at the level of continental cratons, the accretionary zone of microcontinents. Terra Cimmeria-Sirenum is also the only zone in the southern hemisphere where potassium (K) and thorium (Th) enrichment is observed at the surface. All this suggests the presence of continental crust and rocks similar to those observed by the Curiosity mission in the Gale crater located at the northern edge of the crustal block described in this publication.

The existence of this crustal block thus calls into question the two families of hypotheses concerning the origin of the southern highlands and the lower plains of the northern hemisphere, commonly known as the Martian dichotomy. Indeed, it indicates that these lands do not have a single origin and reopens the debate on the mechanisms of crustal growth and possible tectonics during the first 500 million years of Mars' history.