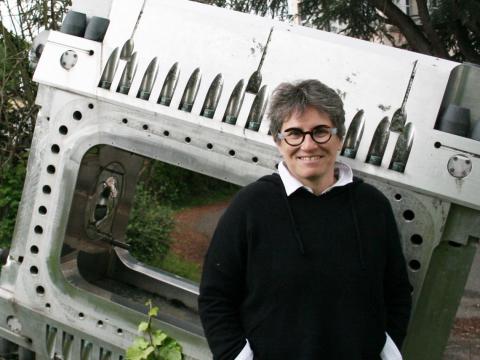 Marie-Hélène Schune: where did the antimatter go?

Marie-Hélène Schune is a research director in particle physics at the Laboratory of the Linear Accelerator (LAL - CNRS/Université Paris-Sud). She has just received the 2019 silver medal from the CNRS. She is involved in CERN's Large Hadron Collider beauty (LHCb) experiment in Geneva, which aims to understand why antimatter, unlike what the standard model of particle physics predicts, is so little present in our universe.

Gradually developed in the second half of the 20th century, the standard model of particle physics, which was completed by the discovery of the Higgs boson in 2012, is working well but does not explain everything. "We have a major problem," says Marie-Hélène Schune. "The theory tells us that we should find in our universe as much matter as antimatter, since they are of the same mass but of opposite quantum charge. When they meet, they annihilate each other and release energy, photons. However, astrophysics tells us that there is no antimatter in the cosmos. No telescope has ever observed one. Some even consider the existence of another antimatter galaxy at the bottom of the universe."

For her research, Marie-Hélène Schune travels two to three times a year to Geneva to the LHCb, CERN's large hadron collider. "It's like a treasure! Everyone comes to collect the data they are interested in. Eight months a year, electrons interact 40 million times a second, 24 hours a day. It's gigantic." Among the thousand researchers, engineers and technicians from all over the world who are participating in the experiment, only a handful of people are working on Marie-Hélène Schune's research subject, including about fifteen in the Laboratory of the Linear Accelerator (LAL), which entails 330 people. "I'm interested in the heaviest quark, the quark b as in "beauty", which synchronizes with other quarks to form a particle." For the past five years, her work has explored "the violation of CP", i.e. the differences in behaviour between matter and antimatter.

The physics of flavours

While the LHC experiments simulate the Big Bang, Marie-Hélène Schune creates matter and antimatter in equal quantities, producing a lot of energy. "By choosing and observing some models of disintegration of particles containing the quark b, such as leptons, I am trying to discover signs of a new physics beyond the standard model, the so-called physics of flavours."

When she was younger, the researcher dreamed of being an archaeologist. But not wishing to enter the preparatory class, she studied science at the Faculty of Orsay. She then clicked in favour of particle physics, which seemed to her an "easy" discipline thanks in particular to "extraordinary professors", such as Xavier Busch, Christian Delsart and Albert Fert. At the end of her master's degree, in 1987, she was selected for a first international summer stay at CERN. She defended her thesis three years later and joined the CNRS at the same time, at the age of 25. "Today, it is very difficult for young people to access permanent positions. The system has become penalizing, even unequal for women," she regrets. Despite everything, she passes on to this young generation a taste for research in a discipline that compensates for its harshness with poetic terminology. "In my 30-year career, I'm still having fun! That's the most important thing," the physicist concludes.