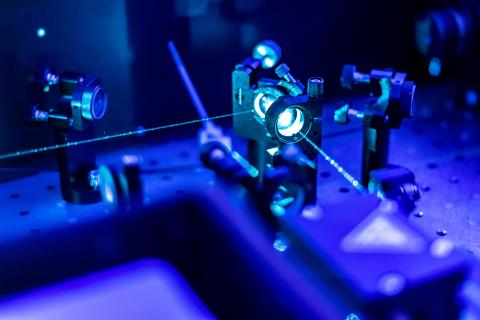 Lou Barreau is a chemist and academic at Université Paris-Saclay, and a researcher at the Institute of Molecular Sciences, Orsay (ISMO - Université Paris-Saclay, CNRS). Working as part of the Dynamics and interactions: radiation, atoms, molecules (DIRAM) team, she conducts research into the dynamics of electrons in molecules in the gas phase using ultrafast laser irradiation.

For Lou Barreau, the journey is more important than the destination. The fact that her work is not limited to a particular family of molecules is because this young researcher is a fan of spectroscopy. “The advantage of this method is that it’s very versatile. It can be applied to a huge range of systems and to potentially any molecule in the gas phase."

Lou Barreau combines nonlinear optical methods, femtosecond lasers and the detection of charged particles (electrons or ions) between light and matter (an area where physics and chemistry overlaps) to study a wide variety of processes at a molecular level.

A researcher made in Saclay

Lou Barreau knows the Saclay plateau very well, as this is where she has spent the majority of her academic career. She joined the chemistry department at ENS Cachan (today ENS Paris-Saclay) a few years ahead of the curve and developed an interest in light-matter interaction during her undergraduate-master course. “It was the course taught by Anne Lafosse in particular, who was my spectroscopy lecturer as an undergraduate and who is now my colleague at ISMO, which really inspired me to go in this direction."

The young researcher completed a first research placement in microwave spectroscopy in the United States, before focusing on extremely short time scales during her PhD, which she carried out from 2014 to 2017 at the Interactions, Dynamics and Lasers Laboratory (LIDYL – Université Paris-Saclay, CEA, CNRS).

The technology for femtosecond lasers was developed towards the end of the 1980s largely thanks to the technique of frequency drift amplification developed by Gérard Mourou from France and Donna Strickland from Canada. Their work was awarded the Nobel prize in Physics in 2018. Femtosecond lasers, also known as ‘ultrafast’ lasers, produce extremely short pulses in the femtosecond range (10-15 s) which can be reduced in the laboratory to an attosecond (10-18 s).

These time scales are the shortest which can be considered when looking at what is happening in matter. They correspond to the dynamics of the nuclei of molecules and electrons, which are a thousand times lighter than the former and therefore faster. At this scale, it is possible to see in great detail how chemical bonds are broken and how electrons are rearranged. “An attosecond is the ultimate time scale for the processes involved in molecules!” points out Lou Barreau enthusiastically. “This is what interested me as a chemist."

In practice, the laser pulses generated are used as flashes. The first flash excites the molecule, generating a state of interest which can be studied, then a second flash, released at a controlled time interval, probes the processes triggered by the excitation. As the pulses are shorter than the processes, changes in the molecule are followed in a stroboscopic manner, much like watching a film. “When you take a picture of a person running, the movement will be seen as blurred if the exposure time is long. If the exposure time is very short however, you can take several sharp pictures and break down the movement. It’s exactly the same principle."

During her PhD at LIDYL, Lou Barreau used attosecond light pulses to observe the photoionization process. The principle of this phenomenon, which Einstein theorised in 1905, is that a photon fired at an atom, molecule or solid at a certain wavelength can eject an electron out of a material. Lou Barreau focused on observing the electron dynamics at play in ‘real time’.  How ‘long’ does it take for an electron to be ionized in an atom? How does this ‘time’ vary from one atom to another, or from one layer of electrons to another, in the same atom?

To achieve this, the researcher sent two ultrafast lasers (whose optical path was controlled to the nearest 10 nanometres) into a vacuum chamber and perpendicular to a jet of gas. A 3D electron detector collected the electrons ejected during the interaction between the laser and the molecules during photoionization, and provided the photoelectron spectra on which Lou Barreau then conducted her research.

Back to Saclay and a combination of research and teaching

After two and a half years as a postdoctoral student at the University of California, Berkeley where she worked on generating and using attosecond pulses in soft X-rays, Lou Barreau returned to the Saclay plateau to work at the ISMO. At the end of 2021, she was awarded the Louis Armand prize from the French Academy of Sciences in recognition of all her research work carried out during her PhD and as a postdoctoral student.

Since becoming a lecturer in November 2020, she now divides her time between her work in spectroscopy and teaching chemistry on the undergraduate-master course at Université Paris-Saclay. “I passed the ‘agrégation’ (teaching qualification) while I was at the ENS because I already knew that I wanted to teach,” this young woman remembers. “I’m really pleased to be given this opportunity and very much look forward to mentoring students in the laboratory. ” Lou Barreau is currently developing a project to equip the laboratory so that she can further her research.

Working towards even shorter time scales

The femtosecond laser emits in the visible range (400 to 780 nm), while attosecond pulses are either in the UV range (10 to 400 nm) or in the X-ray range (0.03 to 10 nm) at different energy levels. “In X-rays, we’re able to separate the electrons originating from the various atoms in the molecule and look at the dynamics of an atom in situ. This then provides ‘spatial’ information in addition to temporal information.” In the medium term, Lou Barreau would like to develop a generator of attosecond X-ray pulses at the ISMO in order to gain even greater temporal accuracy and to learn even more about the processes which take place in molecules after interaction with light.