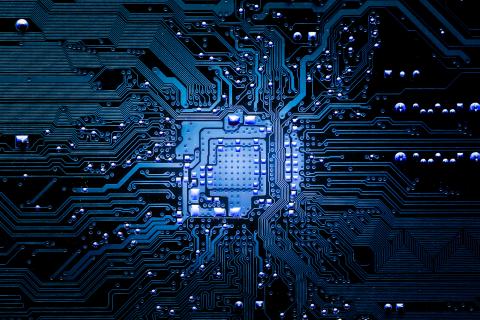 Laurie Calvet is a researcher at the Centre for Nanoscience and Nanotechnology (C2N – Univ. Paris-Saclay, CNRS, Univ. de Paris) and specialises in physics of devices. Her wide-ranging career and sense of curiosity have taken her into several areas of application where physics, chemistry and biology overlap. Her work is mainly concentrated on the study and understanding of new devices and materials used in nanotechnology. Today, one of her main lines of research conducted with the INTEGNANO team (INTEGrative concepts for spin and charge based NANOdevices) is bio-inspired computing, i.e. the creation of circuits and systems inspired by biological functions to create new computing machines.

Laurie Calvet was born in America and received a comprehensive academic education in her native country. After completing a degree in Applied Physics at the University of Colombia in New York, she continued her studies at Yale University, where she completed a PhD in physics of devices under the supervision of Mark Reed. The physicist, who was the first to coin the phrase “quantum dot” to describe a certain type of semiconductor structure, worked on a variety of research topics and also is well-known for his explorations of molecular electronics and biosensors. Laurie Calvet acquired a taste for this inter-disciplinary approach and Mark Reed became a great source of inspiration for her throughout her career.

After having worked on transistors - from the fundamental physics to the search for applications - during her PhD, Laurie Calvet went on to explore different research areas during her post-doctoral studies. In 2001, she joined a chemistry laboratory at Harvard where she worked on molecular electronics. She then worked on quantum dots at a physics laboratory at MIT, where she continued to work with chemists.

A detour via spintronics

In 2004, Laurie Calvet left to live in France and worked for two years in the Joint Physics Unit CNRS/Thales (UMPhy – Univ. Paris-Saclay, CNRS, Thales) where Albert Fert, winner of the 2007 Nobel Prize in Physics, was working on spintronics. This subject area (a fusion of spin and electronics) is concerned with the electrical and magnetic properties of electrons. Albert Fert is a leading figure in the field because of his discovery of giant magnetoresistance.

After this, she joined C2N (ex-IEF) to study for a final post-doctorate on the materials used in spintronics, before being recruited by CNRS in 2007 to explore this topic further. “The idea was to take very specific materials (magnetic oxides) and try to graft molecules inside.” She worked on this for four years before deciding to change her field of research again.

A shift in focus to bio-inspired technology

In the course of her personal reading, she was introduced to biologist Eric Kandel. “I was struck by the fact that he chose his projects according to what interested him,” she remembers. As an experimental scientist in physics, I had always looked for projects which corresponded to the experiments and investigations I could set up. I realised that this was not the most interesting way to find research projects. So, I decided to go into simulation, which allows you to explore many things without necessarily being limited by your own experiments.”

Laurie Calvet comes from a family of doctors, so has a natural interest in biology. In 2015, she began studying neuromorphic hardware. “It involves realizing nanotechnology circuits inspired by biology,” she explains. This research area is a logical continuation for many people who have worked in molecular electronics. However, Laurie Calvet also wanted to put her knowledge of chemistry, electronic engineering and physics of devices to good use and to apply this to her new field of research. This combination of disciplines is a strong feature of her new laboratory. “C2N makes collaboration easy. You interact with a lot of very open-minded people and this creates a really interesting working atmosphere,” she adds.

Together with a German researcher specialising in organic electronics, she has set up an artificial intelligence (AI) project in the area of health called BAYOEN. The aim is to develop bio-inspired intelligent autonomous sensors based on an emerging device, known as organic electrochemical transistors. The goal is to transform electrocardiogram data, simulated by spiking neurons, into probabilistic data. would then identify different cardiovascular abnormalities based on these probabilities. In May 2021, BAYOEN was one of the 21 projects selected within the framework of the Franco-German call for AI projects launched by the French Ministry of Higher Education, Research and Innovation (MESRI) and the German Federal Ministry of Education and Research (BMBF).

This focus on biology now guides Laurie Calvet’s work in the development of new computing machines. However, a precursor to using ideas from biology to realize alternative computing paradigms is to first understand the biological system in the context of a physical model that could then be exploited. It is with this in mind that Laurie Calvet has become interested in ribosomes. This complex system, composed of ribosomal RNAs (rRNAs) and ribosomal proteins assembled in a small and large unit, translates the cell's messenger RNAs (mRNAs) into proteins through the action of transfer RNAs (tRNAs). “I’m passionate about this subject,” enthuses the researcher. “Ribosomes are the ultimate nanomachines! They measure 40 nanometres and make all the proteins, whereas our transistors only switch from ON to OFF and back again.”

The researcher is therefore exploring an explanatory model for the physical functioning of ribosomes based on the topological structure of interactions. Her approach is unusual because it does not involve any chemistry. “Chemists look at the type of bonds created while we physically assess whether proteins and rRNAs are touching each other using mathematical models. If they are close, then there is an interaction,” she explains. She is collaborating with the University of Houston for this project and has been quick to recruit a biology student to help better understand the area. “I enjoy hosting students on work placements because they are interested, enthusiastic and open to new ideas. All that is very motivating when it comes to research!” she adds enthusiastically.

She is also taking part in another bio-inspired project. This one is in neuro-optics and aims to use optical neurons to perform classifications. Just as spiking neural networks mimic how biological neurons work for neuro-inspired computing and information processing, pulsed microlasers help build an optical neuromorphic system. This project was recently funded by CANAPO, a LABEX NanoSaclay project and an ANR project PHOTOMIC.

“The two projects ‘Ribosomes’ and ‘Neuro-optics’, as well as BAYOEN, have very different material systems (optical, organic, biological). However, the idea is always to understand how to improve the technology based on biology,” she says in conclusion. 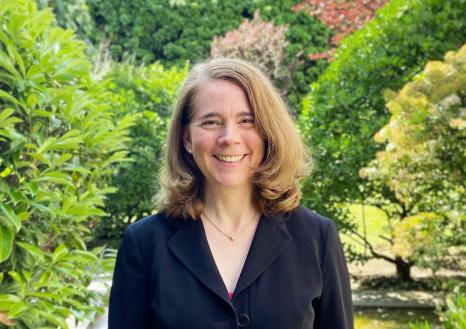