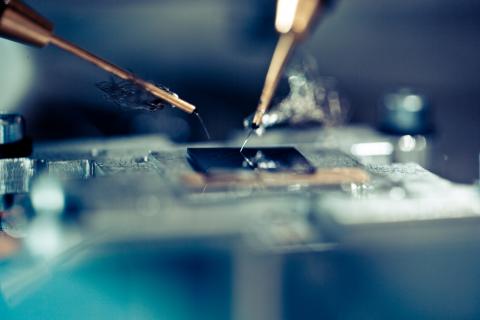 Laurie Calvet, a specialist in physics of devices at the Centre for Nanoscience and Nanotechnology (C2N – Univ. Paris Saclay, Univ. De Paris, CNRS) and leader of the BAYOEN project, met Hans Kleemann, a researcher at the Integrated Centre for Applied Physics and Photonic Materials (DC - IAPP) of Dresden University of Technology, in Germany, at an electrochemistry conference in 2019. This was a key meeting that marked the beginning of their joint projects. Since 2015, Laurie Calvet has investigated neuromorphic hardware, neuro-inspired systems that imitate the functionalities or architectures of biological systems for computing and information processing. Hans Kleemann specialises in organic transistors and in particular organic electrochemical transistors (OECT), from which he is developing neural networks for artificial intelligence (AI). “I introduced him to a post-doc in our team to start a project on reservoir computing [a computational concept inspired by the way the brain works to train neural networks for a task]. That's what started a collaboration between our groups,” Laurie Calvet says.

In the beginning was the transistor

MOSFETs are used in many electronic components, typically in the form of CMOS (Complementary Metal Oxide Semiconductor). These circuits consist of a pair of specific MOSFETs, N and P, and calculate logic functions. Research carried out on these circuits enables the development and optimisation of new device concepts for applications in various fields, ranging from telecommunications to medicine.

When she joined the neuromorphic hardware team at the Institute of Fundamental Electronics (IEF) – which later became C2N – in 2015, Laurie Calvet took part in a European research project on Bayesian inference, BAMBI (Bottom-up Approaches to Machines dedicated to Bayesian Inference). On this project she collaborated with Damien Querlioz from C2N and Jacques Droulez and Pierre Bessière from Université Pierre et Marie Curie, on the design of electronic circuits capable of carrying out Bayesian inference using on stochastic computing paradigm.

Coming from a family of doctors, Laurie Calvet is very inspired by biology. She soon had the idea of implementing these architectures in biosensors for the processing of medical data, in this case electrophysiological data. “I wondered why not try to capture the signals from our heart using neuromorphic circuits,” she says. “This is how the idea of the BAYOEN project was born.”

She then set about exploring how data from biosensors placed on the heart muscle, the signals collected by ECG, could be classified using a neuromorphic circuit on a chip to detect cardiovascular abnormalities. The AI is intrinsic to the system and the personal medical data does not go to a cloud. The data remains anonymous and the system is very energy efficient.

Sensitive to environmental issues, Laurie Calvet wishes to transfer the CMOS circuits used for classification into organic form. That's when Hans Kleemann told her about OECTs. These organic transistors are interesting for several reasons: they are easy to manufacture, cheap, biocompatible and flexible. They are also the subject of significant research and development for bioelectronics, biosensors and large area electronics.

OECTs have a high capacitance, which favours the use of fewer transistors in circuits that contain memory elements. But they are also inherently more environmentally-friendly because they use less energy and are fabricated on recyclable substrates: “Because CMOS devices contain many impurities that cannot be removed, they cannot be recycled,” Laurie Calvet explains. “This project is also a first step towards sustainable development.”

BAYOEN is a collaborative project between C2N and IAPP, but each team contributes different pieces. C2N is leading the computational part of the project, simulating the classification and the Bayesian circuits as well as transforming ECG sensor data into stochastic bitstreams, representing the probabilities of different cardiovascular abnomalities. “This is only the first step in a much more ambitious project, and we had to make choices,” Laurie Calvet says. “To input the circuit and generate stochastic bitstreams, we will use spiking neurons simulations and data already collected in the past. But if the project grows, I would like to do everything from the sensors to the chip needed for classification.” For its part, the IAPP is contributing its expertise on OECTs for the fabrication of the Bayesian circuit.

The budget allocated to the project is mainly used to recruit two doctoral students, each located in France and Germany, but who will be required to move between the two universities to learn the expertise of each laboratory. “We are in the process of putting everything in place for our future doctoral students, but we still have to find the perfect people,” Laurie Calvet concludes with a smile.