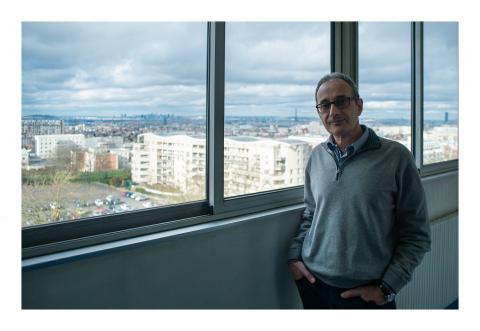 Laurent Mugnier: From images of exoplanets to retinas

Laurent Mugnier is engineer and researcher for the Optics and Associated Techniques Department (DOTA) at ONERA. He works in the field of optical imaging with high angular resolution, on the cutting edge between physics (optics) and applied mathematics (signal processing). The aim is to create images with very high resolution, both for astronomy and ophthalmology, in which field he has just realised a world first. His work has been recognised by the French Academy of Sciences.

The high angular resolution team (HRA) at ONERA Châtillon, where Laurent Mugnier works, specialises in imaging and propagation in turbulent environments. They focus on adaptive optics for both military applications such as satellite imagery and laser focusing, and civilian uses such as astronomy, ophthalmology and optical telecoms. “The aim is to obtain clear images in real time by correcting defects caused by turbulence in the atmosphere or biological tissue that blurs them,ˮ the researcher explains.

Behind the first use of adaptive optics for astronomy in the world (Come-On) in 1990, Laurent Mugnier’s team went on to work on adaptive optics for the VLT (Very Large Telescope) in 2000, then adaptive optics for SPHERE, the Europe’s exoplanet hunter located in Chile. The team is currently working on the development of several ELT observation instruments (European Extremely Large Telescope). For many of these systems, Laurent Mugnier works on design, calibration and image post-processing issues. “I invented a method for SPHERE to measure and correct optical faults to avoid light leaks which masks planets. I have also developed a technique to detect planets in an automatic ʻunsupervisedʼ way. All these methods are based on the Bayesian methodology and begin by correctly modelling the creation of images, then extracting the required information,ˮ Laurent Mugnier explains.

A first for retinal imaging in vivo

The same algorithms can also be used for retinal imaging. This application began 15 years ago when Laurent Mugnier contributed his expertise to the Paris-Meudon observatory and the Hôpital des Quinze-Vingts in Paris. “Defects similar to turbulence must also be corrected, particularly caused by cellular tissue, to obtain a ʻreliableʼ image of the retina to facilitate diagnosis and track the development of pathologies,” explains the researcher. His team has just realised the first retinal imaging in vivo by structured illumination, by transposing this technique of microscopy to “project light on to the retina, providing a high-resolution optical cross-section of the retina in vivo and giving doctors clearer images to analyse”.

This technique may also later be applied to satellite imagery. “Such cross fertilisation is very positive and the team’s strongest quality: one person can work on multiple sectors including astronomy, defence and ophthalmology. The work feeds off itself,” applauds Laurent Mugnier. “I like working in a team because it requires a wide diversity of skills: mechanical, optical, physical modelling, signal processing, etc.” Another exciting aspect: much of ONERA’s research is funded by contracts, obliging teams to respond to calls for projects (ANR, CNES, Department of Defence, ESA, ESO, industrial) which develops project work. “And we are also able to anticipate future needs and challenges thanks to our involvement in fundamental research through our thesis supervision.”

A passion for optics

Last October, Laurent Mugnier received the Lazare Carnot 2019 award from the French Academy of Sciences. The award recognises research into civilian and military applications. He considers it to be “very strong encouragement” to pursue his work in the field. A field that caught his attention when he was just 10 years old and discovered a fascination for holograms at an exhibition at Palais de la Découverte in Paris. After graduating from Ecole Polytechnique in 1988, he submitted a thesis in 1992 about holography with incoherent light to Télécom Paris. After a postdoc at the Northwestern University in Chicago, he returned to France in 1994 and was hired by ONERA to join his current team. Université Paris-Saclay allows the researcher to work with students and fulfil his desire “to encourage a taste for science”. “Be guided by what you want to do. We spend too much time at work to spend it doing something we don’t like!”