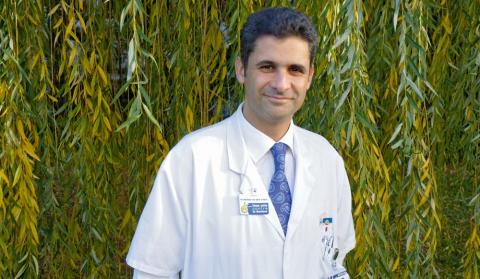 Karim Fizazi: Towards the cure of male cancers

Karim Fizazi is the head of several major oncology studies. He has been a pioneer in the management and treatment of patients with male cancers, such as the testicular cancer of young men and the prostate cancer, over the past ten years. "With 50,000 new cases per year and 8,000 patients dying of it, prostate cancer is by far the most common male cancer," explains the medical oncologist from the Biomarkers and New Therapeutic Strategies Unit at Gustave Roussy. "However, a minority of the patients have metastases from the outset, especially in the bones. They were given the same hormone treatment for 70 years."

The discovery of new therapies

In 2017, Karim Fizazi tested a new treatment on 1,200 patients suffering from metastatic prostate cancer over 134 countries. Half of them received traditional hormone therapy and the other half received a new drug: abiraterone. "This was a new generation of hormone therapy that lowered all androgens, but we discovered that it also prevented cancer cells from producing them." "Combined with traditional hormone therapy, this drug formed a therapeutic cocktail that reduced the risk of death by 35% and doubled the survival time without progression of the cancer." These spectacular results changed the way we treat patients," says Karim Fizazi. He has recently shown that another drug, darolutamide, was also very effective in men whose cancer was not treated by traditional hormone therapy and who did not have metastases. He has also just co-signed the results of a study that paved the way for a new therapy addressing these patients. "20% of them carry cancers due to a defect in DNA repair, because some genes bear mutations. However, we have just proven that olaparib, which is an inhibitor of the poly (ADP-ribose) polymerase (PARP) protein involved in DNA repair, is clearly effective in case of failure of traditional treatments in such a group of patients".

Karim Fizazi is the author of more than 300 publications and one of the 1,000 most cited scientists in the world. He is happy to achieve the goal he set for himself as a young medical intern: "At 25, I hoped to invent new drugs to treat cancer. At the time, oncology was a challenge, with treatments limited to chemotherapy. Today, this field of expertise is in constant flux every two or three years. A doctor and a researcher, Karim Fizazi is blessed with "two distinct great joys". At the individual level, he has “the immense satisfaction of curing a patient suffering from severe metastatic testicular cancer and giving him 50 more years to live". At the collective level, he experiences the feeling "of being a useful person through the feedbacks from colleagues all over the world, whose patients have been in complete remission for many years".

Professor at Université Paris-Sud since 2009, Karim Fizazi "loves" teaching. He is also attentive to the outreach of his research. "While we talk openly about female cancers, we rarely talk about male cancers because they focus on sensitive subjects, such as sexuality or fertility." Because of seeing men completely lost with their disease, Karim Fizazi worked to create the first association of male cancer patients. Created in 2015, CERHOM provides people with information, awareness and mutual aid actions. Karim Fizazi will soon participate in a popular TV show broadcast by a major national channel and sponsored by French movie celebrities.