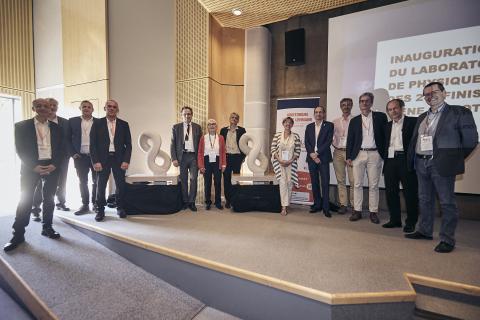 On Monday 16 May 2022, the Laboratory of the Physics of the Two Infinities - Irène Joliot-Curie, or IJCLab, (CNRS/Université Paris-Saclay/Université Paris Cité) was inaugurated by Antoine Petit, CEO of the French National Centre for Scientific Research (CNRS), Sylvie Retailleau, former President* of Université Paris-Saclay, Édouard Kaminski, Vice President for Research at Université Paris Cité, and Achille Stocchi, Director of IJCLab. Established following the merger of five laboratories from the Paris-Saclay cluster in 2020, IJCLab is now one of Europe’s leading laboratories, specialised in the fields of accelerator and high-energy physics. The research carried out within its walls have contributed to major international discoveries in the physics of the infinitely small to the infinitely big.

IJCLab proves that strength lies in unity. The cutting-edge laboratory is the result of a merger between five historic physics laboratories in the Paris-Saclay area: the Centre for Nuclear and Matter Sciences (CSNSM), the Imaging and Modelling Laboratory in Neurobiology and Oncology (IMNC), the Orsay Nuclear Physics Institute (IPNO), the Linear Accelerator Laboratory (LAL), and the Theoretical Physics Laboratory (LPT). They all share a common past, closely linked to the creation and the later development of the Orsay university campus, as well as strong scientific and technical ties.

The merger has allowed IJCLab to be among Europe’s leading laboratories, both in terms of human and scientific potential, in particular in the fields of high-energy and accelerator physics. Spread across approximately 50,000 m², the laboratory brings together some 750 people, including 230 researchers, 350 engineers and technicians and 120 PhD candidates. The laboratory is equipped with the necessary expertise to design and build accelerators and detectors, and can subsequently analyse the data they produce. This unique combination of expertise can be hard to find in laboratories, making IJCLab a popular choice with key industry players.

Elementary particles and the origin of the Universe

As its name suggests, the IJCLab explores the “Physics of the two infinities” and their applications, including the rich variety of subjects which make up the physics of the infinitely small and the infinitely big. “The two aspects are closely linked, because in the beginning, the Universe was made up of elementary particles. We know which particles these were and how they interacted, which allows us to study the evolution of the Universe. So it was logical to bring all of these scientists together in one laboratory, to move forward together and better our understanding of this physics,” says Achille Stocchi, Director of IJCLab and Professor at Université Paris-Saclay.

To improve synergies between teams working on the same or related topics, the scientific activities at IJCLab are organised into seven scientific units: Astroparticles, Astrophysics & Cosmology, Accelerator Physics, High-Energy Physics, Nuclear Physics, Theoretical Physics, Energy & Environment, and Health. The teams work together within their own units, but also with other scientific units, the engineering unit and/or IJCLab’s platforms.

Located at the heart of the Paris-Saclay area, a world-class scientific and technological cluster, and alongside its governing institutions, Université Paris-Saclay, Université Paris Cité and the CNRS, IJCLab benefits from an outstanding environment for its research, teaching, training and outreach activities. As well as being a research laboratory, IJCLab contributes to learning and currently hosts some 120 PhD candidates, giving the laboratory the opportunity to play a leading role in the field and train the next generation of scientists.

IJCLab bears the name Irène Joliot-Curie, a remarkable scientist who was behind the creation of the Orsay scientific campus, which is today the campus of Université Paris-Saclay.

*Sylvie Retailleau was elected President of Université Paris-Saclay on 2 March 2020. On 20 May 2022, she was appointed Minister of Higher Education and Research to the French government. Find out more here.

For the inauguration of IJCLab, Antoine Petit, CEO of the CNRS, and Sylvie Retailleau, former President of Université Paris-Saclay, unveiled the two statues which will be placed installed on the lab’s site. The statues were created by Les Ateliers Saint-J 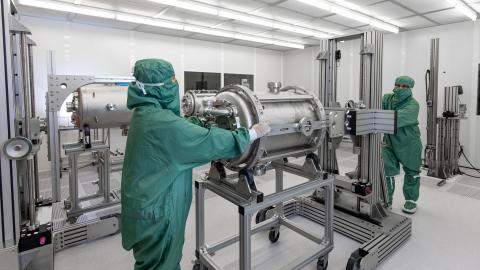 Preparation of accelerating cavities in the clean room of the SUPRATECH platform at IJCLab.