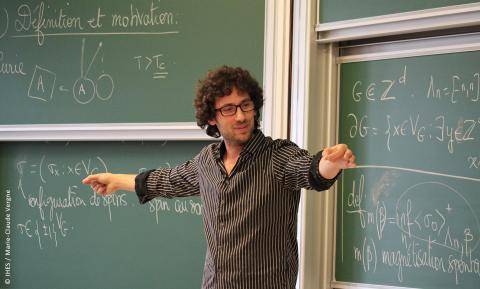 Hugo Duminil-Copin, a French mathematician specialising in probability theory and a permanent professor at the Institut des Hautes Études Scientifiques (IHES) since 2016, has been awarded the Fields medal at the International Congress of Mathematicians in Helsinki.

This is the eighth Fields Medal (1) awarded to a professor at IHES (out of twelve permanent professors in mathematics since the Institute’s creation) and the eleventh Fields Medal (2) for Université Paris-Saclay, IHES being one of its founding members. This is also the sixteenth Fields medal awarded to a researcher whose institution is linked to the French National Centre for Scientific Research (CNRS) (3).

Emmanuel Ullmo, Director of IHES, said: "We are delighted that the Fields Medal has been awarded to Hugo Duminil-Copin, a probabilist whose work has been so important that the scientific council of IHES unanimously chose him as a permanent professor very early in his career. This distinction also confirms the dynamism and excellence of the French mathematical community, as well as its recognition on a global scale.”

Hugo Duminil-Copin said: "I am very honoured to receive this prize, which I wish to share with the many colleagues with whom I’ve had the pleasure and the honour to work with, as well as with all of the members of my team. As a permanent professor at IHES, I have benefited from great freedom and independence in my research, whilst exchanging with some of the most outstanding scientists in their field, in mathematics as well as in physics."

Hugo Duminil-Copin, a mathematician with a remarkable track record

Born on 26 August 1985, Hugo Duminil-Copin joined the Ecole Normale Supérieure in Paris after two years of preparatory classes at Lycée Louis-le-Grand. After receiving a Master’s degree from Université Paris-Sud, now Université Paris-Saclay, he earned a PhD under the supervision of Stanislas Smirnov, who is himself a 2010 Fields medallist at the University of Geneva, where he later became a post-doctoral researcher.

In 2013, he became Assistant Professor at the University of Geneva, and has been a professor there since 2014. In 2016, he joined IHES as a permanent professor. Since 2017, he has been the principal investigator of the European Research Council – Starting Grant “Critical behavior of lattice models (CriBLam)”, funded by Horizon 2020, the European Union's research and innovation funding programme. He is a member of the Alexander Grothendieck Laboratory, a CNRS joint research unit (CNRS/IHES).

Hugo Duminil-Copin's work focuses on the mathematical branch of statistical physics. He uses ideas from probability theory to study the critical behaviour of various models on networks, such as the Ising, the Potts, the self-avoiding walk, and the percolation models. These mathematical objects describe a number of physical phenomena (such as magnetisation, polymers, material porosity, etc.) by reframing them through random trajectories, sets or random graphs.

By using new connections between these models and by developing a theory of dependent percolation, Hugo Duminil-Copin has obtained major results on these classical models and their phase transitions, improving our understanding of critical phenomena in statistical physics at equilibrium.

Hugo Duminil Copin’s work has earned him numerous awards. In 2012, he received the Rollo Davidson Prize, together with Vincent Beffara, and the Vacheron Constantin Prize. In 2013, he was awarded the Oberwolfach Prize, before receiving the "Early Career Award" from the International Association of Mathematical Physics. In 2016, he received the European Mathematical Society Award, and in 2017 the Breakthrough Foundation bestowed him with the New Horizons in Mathematics Prize, reserved for particularly promising young scientists. In the same year, he was awarded the Grand Prix Jacques Herbrand by the French Academy of Sciences and the Loève Prize for outstanding research in the field of mathematical probabilities. In 2018, he was among the guest speakers at the International Congress of Mathematicians held in Rio de Janeiro, Brazil. Elected as a member of the Academia Europaea in 2019, he received the Dobrushin Prize in the same year.

Other IHES permanent professors who have received the Fields Medal:

Other mathematicians from Université Paris-Saclay who have received the Fields Medal:

Other mathematicians who have received the Fields Medal and whose institution is linked to the CNRS:

Hugo Duminil-Copin, a mathematician at the interface