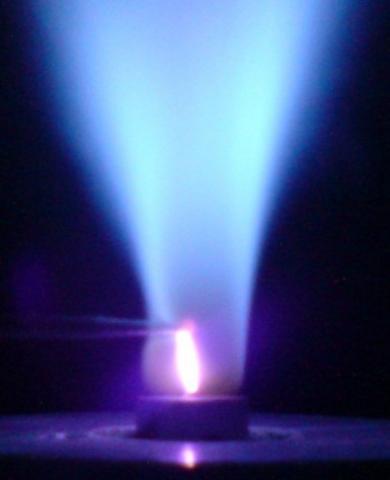 Awarded an ERC Advanced Grant for his GreenBlue project, Christophe Laux, professor at CentraleSupélec and researcher at the Molecular and Macroscopic Energetics and Combustion Laboratory (EM2C - Université Paris Saclay, CNRS, CentraleSupélec), explains his work on non-equilibrium or cold plasmas and their application in the energy and environment sectors.

Plasma is a reactive gas that is described as cold when it is not the product of nuclear fission or fusion. It has a lower temperature than hot plasma but it still reaches temperatures of several thousand degrees. It is formed by the application of an electric discharge to a gas. The electric field produces accelerated electrons that collide with gas molecules, ionising and dissociating them to form reactive species such as radicals and atomic species.

This gas mixture is the field studied by Christophe Laux, professor at the Molecular and Macroscopic Energetics and Combustion Laboratory (EM2C - Université Paris Saclay, CNRS, CentraleSupélec). The researcher and his Nonequilibrium Plasma Group are particularly interested in the chemical reactions that occur in cold plasmas. "They are a chance for new, more efficient chemistry," the researcher explains.

One of the challenges offered by this new chemistry is the selection of chemical reactions that occur in the gas. "Our capacity to control them depends on our understanding of the physical phenomena at the molecular level," explains Christophe Laux. The key is in the EM2C team’s expertise. Combining physics, chemistry, and mathematics, the scientists analyse cold plasmas using optical and laser spectroscopy techniques to quantify products formed under different conditions. They then establish numerical simulations to understand the results of the experiments.

As its name suggests, the team focuses on non-equilibrium or cold plasmas. The scientists adjust the parameters of the electric discharge to contain the undesirable effects of the plasma. Such as heating gas which represents a huge loss of energy and productivity in reactive species. Generated by collisions of gaseous molecules with electrons, this heat reaches thousands of degrees in about 20 nanoseconds (10-9 s). To reduce it, scientists use pulsed electric shocks: "Pulses of ten nanoseconds cause around one hundred collisions for each electron and limit heat production".

The last step is to use as much of this energy as possible to produce the desired reactive species. "We control chemical reactions that occur in the gas by targeting electrons with the right energy," adds Christophe Laux. Each chemical reaction has its own energy for activation, like a key in a lock. An electron requires similar energy to trigger it. "By selecting the amplitude and duration of nanosecond electric pulses, the acceleration [energy] of the electrons can be optimised to select different reactions.” The scientists control the chemical species produced in the plasma to dissociate the oxygen molecules present in the air in a single discharge.

A role in ecological transition

These fundamental studies are particularly pertinent for the energy and environment sectors. The EM2C team has chosen to focus its efforts on three areas: recovery of CO2, production of green hydrogen, and the reduction of nitrogen oxide emissions.
Using a cold-plasma process, scientists recycle CO2 into oxygen and carbon monoxide which have high-value in the production of hydrocarbons and fuel for industry.

The start-up SPARK, a spin-off from the Nonequilibrium Plasma Group, supported by SATT Paris-Saclay and hosted by the EM2C laboratory, uses this technology to produce decarbonised hydrogen from methane. The solid carbon generated as a by-product of the reaction can also be recycled to improve soil health. "We reverse the usual industrial process by producing coal instead of oxidising it," says Christophe Laux.

The researcher was awarded a 2020 ERC Advanced Grant for his GreenBlue project (Greenhouse Gas and Pollutant Emission Reductions using Plasma-Assisted Combustion for a Blue Planet). The objective of the project is to develop a plasma-assisted combustion system to reduce nitrogen oxide emissions from cutting-edge aircraft engines, such as the ZEROe by Airbus. To fight climate change, the aviation industry is increasingly moving towards carbon-neutral fuels (Sustainable Alternative Jet Fuels), such as hydrogen. However, their combustion releases toxic nitrogen oxides which cause acid rain and destroy the ozone layer. "By reducing flame temperatures, we are able to reduce the production of nitrogen oxides under certain conditions," explains Christophe Laux. But this means weakening the flame which is like a wick at the end of a candle: it flickers and risks going out. The reactive species produced during the electric discharge can stabilise it via plasma-assisted combustion. Using this strategy, the scientists demonstrated efficient combustion with plasma power of less than 1% of flame power. The scientists are developing advanced numerical models and optical diagnostics to shed light on the persistent complexity of interactions between the flame and plasma.

An unlimited source of innovation

The Nonequilibrium Plasma Group is also partially focused on the aerospace sector, particularly the entry of spacecraft into the Earth's atmosphere and the debris generated by their return to Earth. The scientists are pursuing this work with a second five-year project with NASA under a Space Act agreement. They are also working with the company TEQOYA on air decontamination using plasma discharges. Finally, a second spin-off, PICOS, is currently being developed with SATT Paris-Saclay to investigate the use of cold plasmas to desalinate sea water and treat brine.

The list of innovations goes on, with other studies underway into the use of cold plasmas in the synthesis of nanomaterials, plasma medicine for cauterisation and therapy, bio-decontamination, and plasma agriculture for anti-germ treatment.

The electrical discharge produces reactive species that stabilise the flame. The plasma is visible at the bottom of the video (height 5 mm, diameter 0.5 mm). Credits: Nonequilibrium Plasma Group, EM2C Laboratory 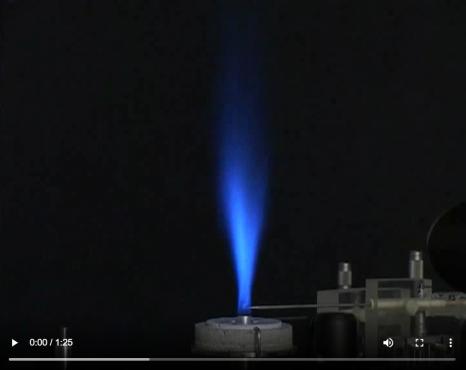