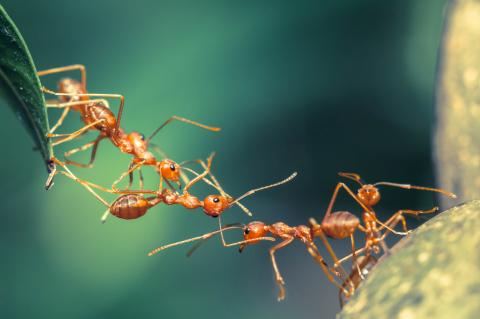 Franck Courchamp: understanding the impact of human activities on biodiversity

Franck Courchamp is Director of Research at CNRS and a researcher at the Ecology, Evolution and Systematics laboratory (ESE – Université Paris-Saclay, CNRS, AgroParisTech). A specialist in animal population dynamics and conservation biology, he is one of the most quoted scientists in his field, as well as being an outstanding communicator. Describing himself as a hyperactive jack-of-all-trades, he confesses that curiosity is his main driving force.

When you ask Franck Courchamp to talk about his career, his first answer sounds like a given. “I’m a product of the university system through and through!” After completing a Master’s degree in Biology at Université Paris-Sud, he studied for his DEA (advanced studies diploma) at Université Lyon 1 and completed a thesis on the epidemiology of feline aids. “It was during this time that I discovered my passion for research and I decided to make it my profession,” remembers the researcher. With his PhD completed, Franck Courchamp set off for the United States, where he carried out his first post-doctorate on biological invasions at the University of San Diego in California. He then joined Cambridge University, where he completed a second post-doctorate on the dynamics of rare populations. In the year 2000, he was taken on as a research fellow at CNRS in the Ecology, Systematics and Evolution laboratory in Orsay. He started to study the impact of climate change on biodiversity there. “I came from a background in fundamental ecology and the study of population dynamics, but I gradually shifted to a more applied approach by focusing on conservation biology,” explains Franck Courchamp.

Understanding the importance of rare species

Not long after he had arrived, Franck Courchamp devoted part of his research to the question of the importance of rare species. “In the context of the overexploitation of wild species, I demonstrated that, contrary to the theories in force in economics, declaring a species as 'rare' can increase its importance and as a result, paradoxically, accelerate its extinction. Together with my team, we therefore started a series of studies on human behaviour to demonstrate this interest in scarcity,” explains the researcher. During a series of experiments conducted on the public at the zoo in the Jardin des Plantes in Paris, Franck Courchamp and colleagues designed features which required the public to make an extra effort (climb a flight of stairs), take a risk (walk under a sprinkler) or pay a financial cost (pay extra) to see species which were labelled 'rare' or 'common', but which were in fact the same. In another experiment, he asked a ‘VIP’ audience to taste two caviars (which in reality were the same). One was presented as ‘rare’ and the other as ‘common’. “Using these experiments and many others, we’ve shown that the public is prepared to pay more, make more effort, bear discomfort and take more risks for the rarity factor.” This work, which has allowed Franck Courchamp to develop interdisciplinary approaches including economics, socio-psychology and conservation sciences, has also resulted in him receiving a prestigious silver medal from CNRS in 2011.

Another very important area of research for his team is biological invasions which threaten biodiversity. “From 2008, we looked in particular at the problem of the invasion of certain species of ants. We wanted to understand why invasive ant species were more effective than local ants. To do this, we carried out numerous experiments in the laboratory and in the field (such as races in mazes or competitive tests) between ants from colonies of different species. These experiments received wide media coverage because they were particularly entertaining,” explains the researcher. In the face of so much hype, Franck Courchamp started wondering about how best to share the work of his laboratory with those beyond the scientific world. This was how the idea of La Guerre des fourmis (Ants War) was born – an educational comic book for the general public illustrating the research carried out on these invasive ants. This creation immediately found its public. Since it was made available free of charge, this comic book has been viewed by more than 400,000 Internet users.

Communicating science to as many people as possible: a key priority

Franck Courchamp has always had this knack for making things popular. As a PhD student, he was told that good popularisers are unfortunately too often seen as bad scientists, but the young doctor did not refrain from devoting time to writing articles for journals such as La Recherche or creating a documentary for CNRS Images. “I’ve always felt the need to share my passion for science. I’m increasingly convinced that the public's appetite for science, its concepts and its experiments is greatly underestimated.” In addition to La Guerre des fourmis, other creations by Franck Courchamp have enjoyed success over the years with the general public. These have included the book L’écologie pour les nuls, (Ecology for Dummies) which was published in 2009 and has now become a benchmark in the field; the ten-part 3D animated film Insignificant : une espèce à part (Insignificant: a species apart) created with Clément Morin which questions the place of human beings in the Universe and has been seen more than fifteen million times; and Legacy, the latest film by Yann Arthus-Bertrand, with and for whom he wrote and which offers a wonderful vision of humanity. “Although each of these ventures has been unique, they all share the same goal of reaching out to the audience. I’m keen to produce a form of popularisation that’s not about doom-and-gloom, or about anguish or guilt. To convey a message and reach as many people as possible, I prefer to rely on humour, as in L’écologie pour les nuls or La Guerre des fourmis, or on wonder, as in Une espèce à part or Legacy,” explains the researcher.

Getting involved to make a difference

Franck Courchamp is one of those so-called 'committed' researchers. He is committed to serving the students he supports and is keen, as he likes to say, “to make them better researchers than himself”. “Whether it’s with my doctoral students or with the students I supervise at various levels, I’ve always considered my role more as one of mentoring than one of supervision. I’m therefore very much involved,” he adds. Franck Courchamp also shows his commitment to society with his involvement in drafting reports for the Intergovernmental Panel on Climate Change (IPCC) and the Intergovernmental Science-Policy Platform on Biodiversity and Ecosystem Services (IPBES). “If there’s an opportunity to change things, we must seize it,” he says in conclusion.