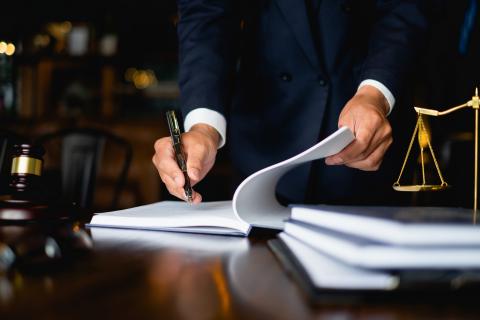 Dimitri Houtcieff: a specialist in contract law with multiple implications

Dimitri Houtcieff is a professor of Law, a lecturer at the Léon Duguit Reseach Centre (CRLD – Univ. Paris-Saclay, Univ. d’Évry) and Deputy Director of Education at the Law Graduate School. A specialist in common contract law, he holds a number of positions within the University. In addition to teaching, writing is his favourite way of passing on his knowledge.

A busy career at the law school

From 2003 to 2007, Dimitri Houtcieff took on responsibility for various diplomas, including the DESS (which is the equivalent of a Master today) in Mergers and Acquisitions. Following this, he set up and directed up until 2011 the 2-year of master’s degree in Business Contract and in Credit Law. The latter was later renamed Business Contract Law and the professor took on its management again in 2018. From 2013 to 2020, Dimitri Houtcieff directed the University’s Institute of Judicial Studies (IEJ) which prepares students for the bar exam. Since 2016, he has been Vice-Dean at the Faculty of Law at Université d’Évry. “I assist the Dean in most tasks, including the management of courses, the supervision of students and the Faculty’s presence in the region.” This includes strengthening links with surrounding institutions such as the judicial court, the commercial court, the administrative courts and the prefecture. However, it also involves ensuring that all students from all backgrounds have an education of excellence and accessibility in a human-scale environment so that they can reach the level necessary for successful professional integration. “I think that the level of support offered by our University is a real asset, especially for undergraduate students.”

A strong investment in Université d'Évry

Dimitri Houtcieff has been a member of the Committee for Education and University Life (CFVU) since 2019. Its mission is to give its views on educational policy, training issues and the living and studying conditions of students. In addition, during this very same year, he became an alternate member of the National Universities Council (CNU). One of the responsibilities of the Council is to supervise the careers of professors and academic staff. “This position provides me with an excellent vantage point for observing the research output of young Doctors of Law.” Since 2021, he has also been acting as Vice President of the Governing Board of Université d’Évry with responsibility for human resources. In particular, he is responsible for the employment drive which aims to obtain and allocate teaching and administrative posts at Université d’Évry. This year, within the framework of the reform of the Law for Research (LPR), Dimitri Houtcieff has helped to introduce the new implementing decrees which are changing the way professors are paid.

As part of his research role at CRLD, Dimitri Houtcieff has specialised in three areas. The first area is the law of obligations from the perspective of common contract law. The aim is to study the legal links voluntarily created between people. His book Droit des contrats (Contract law) has just been released in its seventh edition. The second area is that of commercial law and involves the rules concerning traders and commercial acts which govern the jurisdiction of the commercial courts or which apply to commercial leases, business assets and competition law. The fifth edition of Droit commercial et des affaires (Business and commercial law) has also just been released. The third area concerns the law of personal guarantees, i.e. guarantees which rely on the addition of a second debtor, most often a guarantor, in cases where a creditor doubts the reliability of the debtor. Dimitri Houtcieff has published Traité de droit des suretés personnelles (An essay on the law of personal securities) on this subject which he co-wrote with Anne Sophie Barthez, the Director General for Higher Education and Professional Integration at the Ministry of Higher Education, Research and Innovation. He is currently writing General system obligations, which covers all obligations, whether in contract or in tort. And since writing is one of his favourite fields, Dimitri Houtcieff also regularly writes columns, notably in the Gazette du Palais and the Revue de droit des contrats.

Dimitri Houtcieff is committed to encouraging and promoting the combination of practice and theory. “Law professors are often criticised for not focusing enough on practice and favouring theory. It’s an incorrect impression as one cannot be separated from the other. A comment on a decision is, after all, nothing more than a study of a procedural law.” Furthermore, in practice “the competence and added value of a legal professional doesn’t come in the form of ready-made formulas. It’s the ability to understand, analyse and reflect which is valued.” Dimitri Houtcieff fully practised this ability when he created, together with partners, his law firm in business law in 2008. He worked there alongside his academic career until 2016. “I don’t think that you can really teach Law unless you’ve practised it. Working as a lawyer has enriched my writing, leading me to understand issues which aren’t often addressed in books.”

Since 2020, Dimitri Houtcieff has been Deputy Director of Education at the Université Paris-Saclay Law Graduate School. His mission is to coordinate the courses offered at the University’s different sites in order to strengthen their coherence, stimulate interaction and develop the Graduate School’s attractiveness. The challenge is considerable in view of the number of courses and staff involved, i.e. nine Master's degrees tracks, more than 40 2-year of master’s degrees, numerous laboratories and research programmes and doctoral schools. However, Dimitri Houtcieff is feeling confident. “We’re relying on the excellence of our teaching and supervision, and we benefit from the international reputation of Université Paris-Saclay in scientific fields. These two major assets can position us as a University which is world-class in Law.”