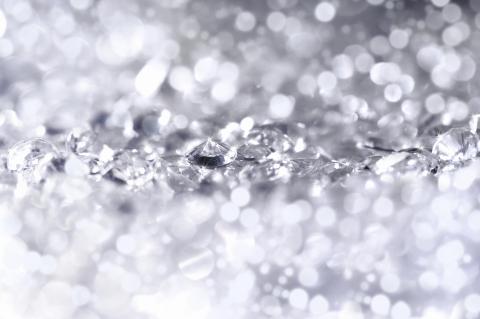 Well known as a precious stone, diamond is also a material with remarkable technological potential. Its defects give it original properties, in particular as sensors on an atomic scale. The e-DIAMANT project, led by Jean-François Roch of the Light, Material and Interfaces Laboratory (LuMIn - Université Paris-Saclay, ENS Paris-Saclay, the French National Centre for Scientific Research (CNRS), CentraleSupélec) and coordinating a national network of partners, proposes to create the entire chain necessary for the manufacture of these defects and their exploitation. Winner of the EquipEx+ call for expressions of interest from the French Ministry of Higher Education, Research and Innovation, e-DIAMANT is part of the French quantum strategy.

Diamond is a material well known to the public. Coveted as a gem, it is now possible to synthesise near perfect crystals. But it is also possible to introduce defects into this crystal on an atomic scale, which give the diamond new functions. For several years, Jean-François Roch and his team at the Light, Materials, Interfaces Laboratory (LuMIn - Université Paris-Saclay, ENS Paris-Saclay, CNRS, CentraleSupelec), as well as the entire French scientific community, have been interested in the NV centre, which is made up of a nitrogen atom coupled to a gap in the crystal lattice. This NV centre, which is highly sensitive to magnetic fields, makes diamonds a material with tremendous potential for nanoscale magnetism and spintronics: the aim is to detect the magnetic and superconducting properties of materials under high pressure in diamond anvil cells, and to elucidate chemical structures using nuclear magnetic resonance (NMR).

Like several other projects linked to Université Paris-Saclay, the e-DIAMANT project is a winner of the EquipEx+ call for expressions of interest from the French Ministry of Higher Education, Research and Innovation, which finances structuring equipment for research. Its aim is to develop and exploit these technologies.

The project covers the entire production chain, from the introduction of defects into diamond crystals to the development of magnetometers for targeted applications. These diamonds are initially manufactured using a technique called chemical vapour deposition (CVD). It consists of dissociating methane and hydrogen in a plasma to deposit successive layers of carbon, whose atoms assemble to create the crystal structure of diamond.

“The guiding idea is to start with single-crystal diamond, to exploit its unique properties in terms of transparency or hardness, and to functionalise it on an atomic scale with defects that behave like artificial atoms,” Jean-François Roch explains. The NV centre, which will serve as a sensor, is either manufactured during the synthesis of the crystal or created from implanted nitrogen atoms using ion beams. The surrounding magnetic field affects the energy levels of the NV centre, in other words its spin state. The combination of the optical and spin properties of these centres results in an optical reading of the magnetic field amplitude and orientation on the scale of a few nanometres. Spatial resolution 1,000 times better than conventional magnetometers. Using a diamond tip with this defect at the end, it is possible to map the magnetic field produced by the magnetisation of a sample. 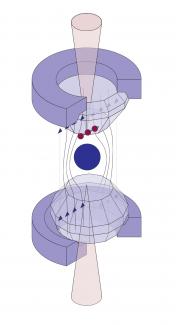 Having a sensor embedded in the diamond is an opportunity for high pressure physics. This is the purpose of the collaboration developed between LuMIn and the Matter under Extreme Conditions Laboratory (LMCE - Université Paris-Saclay, CEA). Two diamond anvils are then machined to a point. By applying pressure to the outer faces of the anvils and due to the strength of the diamond and the difference in surface area between the outer face and the tip, the pressure applied to the sample trapped between the two anvils can reach several hundred gigapascals (GPa), or more than one million times the atmospheric pressure. “At these pressures, the structure of the materials is completely changed. If you take a semiconductor, at a sufficiently high pressure, it becomes metallic and even superconducting.”

The e-DIAMANT project will integrate NV centres into diamond anvils so that they can be used as in situ detectors. In collaboration with the SOLEIL synchrotron, the project will couple NV centre measurements with X-ray diffraction to further resolve the structure of matter under pressure.

Thanks to the participation of the European Centre for Research and Teaching in Environmental Geosciences (CEREGE - Aix-Marseille University, CNRS, IRD, Collège de France, INRAE), the e-DIAMANT project foresees applications in geology, a field where determining magnetic properties is essential. The smaller the scale, the further back into the Stone Age we probe. Measurements by NV centres will explore still open questions about the effect of very high pressure on rocks.

e-DIAMANT will couple academic work with industrial issues. In addition to Thales, the project's industrial partner and a pioneer in the development of diamond-based quantum sensor technologies, companies such as DiamConcept will also accompany the consortium.

Competitiveness in the field is very strong at international level. Germany, the United States, China and Australia are among the important players. “But we have the potential to make France a leading global supplier of diamonds suitable for quantum sensors,” says Jean-François Roch. The EquipEx+ e-DIAMANT project is thus part of the Quantum Plan announced by President Emmanuel Macron on 21 January at the Centre for Nanoscience and Nanotechnology. The expertise and know-how developed, or being developed, by the e-DIAMANT partners are available for use by state-of-the-art tools for quantum technologies.