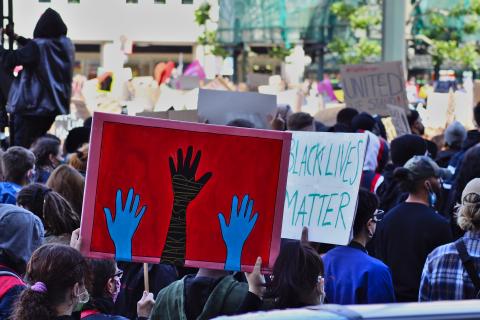 Cécile Coquet-Mokoko: “We needed an icon of today, and this icon was George Floyd”

The rallies in the United States following the death of George Floyd, a black American man who died during a police arrest, closely followed by the resumption of protests in France, have brought to light the racism which still exists in these two countries. Cécile Coquet-Mokoko, American Civilization professor at the Centre d'histoire culturelle des sociétés contemporaines (Cultural History of Contemporary Societies Centre, CHCSC - Université Paris-Saclay, UVSQ) and deputy director of training at the Institut d'études culturelles et internationales (Institute for Cultural and International Studies), has recently spoken to various different media outlets to comment on the current situation. What is her point of view on these events?

Studying the United States through the prism of race 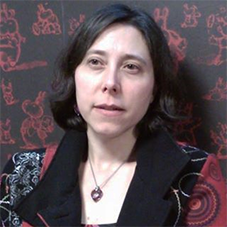 “African-American studies are a way to look at the history of the United States. They emphasize power and class relationships, while bearing in mind that these relationships have been racialized since the beginning: for example, you’re not only a farm worker, but a white or a black farm worker. From there onwards, depending on the way in which laws define you, you won’t necessarily have the same destiny. This started having repercussions from 1619, when the first captive Africans arrived on Virginia soil, and is still the case today”, explains the researcher. “Since its creation, the United States has been a multiracial nation, but it was built upon power relations. And since history is often written by victors, American history has long been taught as only that of white, Anglo-Saxon and protestant people, and of their descendants.”

Rallies against racism: the same themes, but new activist strategies

While the murders committed against black people in the United States - including by the police - are unfortunately commonplace, they don’t all give rise to a wave of anger like that seen following the death of George Floyd.

Cécile Coquet-Mokoko explained that often the victims’ past is used to question their morality, and thus minimise their death. This rhetoric couldn’t be applied to George Floyd, and this is partly what generated this outrage across the world. “We needed an icon of today, and this icon was George Floyd”, she says.

The demands of and reasons for the rallies are nothing new: according to Cécile Coquet-Mokoko, they are a continuation of the civil rights movement, which has been “almost never-ending since slavery”. Nevertheless, she observed that “the fact that citizens are now armed with smartphones marks a step forward in the civil rights movement”. The movement benefited from the emergence of the television in the 1950s-60s, to show compelling evidence of racism; today, social networks are at the core of activism. These social networks allowed images of Floyd’s death to be diffused.

In France, “there is a certain degree of importation regarding American activist strategies”, explains Cécile Coquet-Mokoko with regard to the rallies which also started again on this side of the Atlantic. This activism is partly due to the fact that it is difficult to talk about race in France. “The other side of the coin with the universalist republican ideal - which is good in itself - is that the Republic wants to appear to be colour blind. Except that erasing race does not erase racism”. For example, France is still marked by the colonial fantasy, which assimilated black people to savages that needed to be controlled.

As it is difficult for victims of racism to express themselves, Cécile Coquet-Mokoko calls for a more inclusive history, which looks into the painful chapters of history. “I think it’s a shame that we gag people who want to talk as French black people. If we have French black, Indian and Asian people, it’s because we colonised across the planet, so I am completely baffled as to why politicians systematically turn their speeches on racism into a rhetoric of repentance, in which we should ask for forgiveness”. She compares this important view on the past to an adolescent crisis: “You realise that your parents are not perfect and that you don’t want to make the same mistakes they did. I don’t see why we can’t do the same thing with the history of a country that we love.”