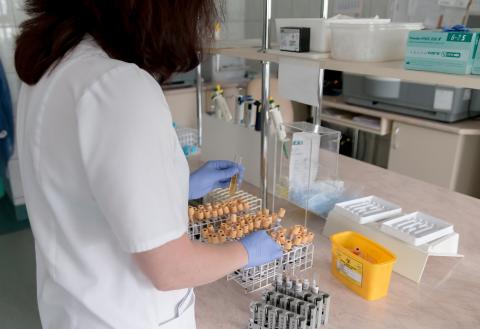 Researchers at the Laboratory for metabolic and systemic aspects of oncogenesis for new therapeutic approaches (METSY - Université Paris-Saclay, CNRS, Institut Gustave Roussy) have analysed information in scientific literature regarding interactions between cancer and people infected with HIV and treated with triple therapy: Highly Active Antiretroviral Therapy (HAART). The results of the synthesis provide new information about the impact of the therapy on different types of cancers.

There is proof: people infected with HIV have a higher risk of developing cancer than those who are not. Since the use of highly active antiretroviral therapy (HAART), or triple therapy, which restores immunity and suppresses viral replication, the risk has decreased. However, the overall risk for people with HIV developing cancer is still 1.6 to 1.7 times higher than for the rest of the population. 10 - 20% of deaths of HIV-positive people are still due to cancer.

Given this serious threat to public health, Anna Shmakova and her colleagues at the METSY laboratory analysed existing scientific literature to understand how triple-therapy drugs work and how they can prevent cancer in HIV-infected patients.

Cancer and HIV - a widespread association

There are two main types of cancers: those defining AIDS (ADC) and traditionally seen in HIV-infected patients, such as Kaposi's sarcoma, non-Hodgkin's lymphoma, invasive cervical cancer,  and other non-AIDS-related cancers (NADC).

People with HIV who received HAART are less likely to be diagnosed with ADCs, the outcome of such cancers is improved, and mortality is decreased. However, the risk of developing ADCs is still high and proportional to the degree of HIV. Immunosuppression is a key predictor.

NADCs, on the other hand, have been steadily increasing since 1996 and no change is expected. They account for about two-thirds of all cancers in HIV patients. The increase is partly related to infected people living longer thanks to HAART. As a result, there is more time for cancer to develop. Unlike ADCs, the link between HIV and the risk of NADCs is still questionable.

Is triple therapy an adequate arm against cancer?

Much preclinical research shows HAART drugs have anticancer properties but fails to confirm possible protective effects against NACDs: "The problem is dosage: the dose used for triple therapy is very often lower than the dose used to treat cancer. That’s why, despite the positive effects of HIV drugs, there is not always a decrease in cancer rates," explains Anna Shmakova. What’s more, people with HIV are generally excluded from clinical trials.

"Triple therapy is a very severe treatment, and other drugs are added when a patient develops cancer. We need to observe interactions between all the drugs to assess whether stopping triple therapy is necessary during chemotherapy," explains Yegor Vassetzky, another METSY researcher. “But publications examining cancer in HIV patients are not very interested in the type of treatment they are taking,” says his colleague Anna Shmakova. Data on drug toxicity and interactions are still quite limited. Some studies, however, show that stopping HAART during chemotherapy is not positive for HIV-positive cancer patients.

A pressing need for clinical studies

The METSY researchers’ synthesis produced a clear result: lack of clinical recommendations and experience in treating HIV and cancer simultaneously indicates an urgent need for large-scale epidemiological studies to examine the effect that certain HAART drugs and their dosage can have on cancer prevention. It is necessary to include more HIV-positive people in clinical trials of cancer treatments. Otherwise, the complex relationship between triple therapy and cancer will remain a mystery.