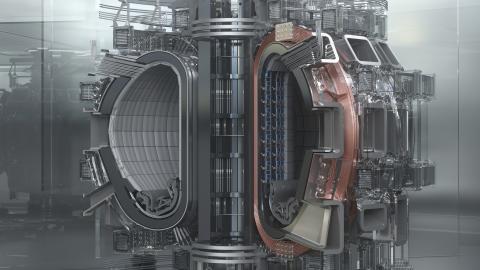 (This article was originally published in L'Édition N.20)

At the Irène Joliot-Curie Laboratory for the Physics of Two Infinities (IJCLab – Univ. Paris-Saclay, CNRS, Univ. Paris Cité), Aurélie Gentils’ team is working to understand the coupled effect of neutron flows and gas accumulation on the properties of materials in future fusion reactors.

In future fusion reactors, materials will be exposed to very high temperatures, neutron flows and an accumulation of light gases (helium and hydrogen), produced in non-negligible quantities by the fusion between deuterium and tritium. These elements have an impact on the microstructure of the material. This is because a solid, crystalline material has a periodically ordered arrangement of atoms, which are sometimes ejected on collision with neutrons released during the fusion reaction, leaving a gap or even a cavity resulting from a cluster of gaps. Helium ions, accumulated in the environment of the material, then get into it and create bubbles that grow and weaken the material.

At IJCLab, within the Energy and Environment unit, Aurélie Gentils’s team experimentally simulates these damages using ion beams of the JANNuS-SCALP platform. “This has the advantage of not making the material radioactive. Damage can be characterised in situ and in real time.” A beam of energetic heavy ions simulates the damage induced by neutrons. “The heavy ions pass through the material and create displacement cascades: they collide with the nuclei of the atoms they meet and interact with the electrons orbiting the nuclei.” Using a second beam of lower-energy ions, the scientists promote the incorporation of helium (or hydrogen) into the material. Then, they study where the two damages are both present. “The irradiation coupled with helium incorporation affects the material to a depth of between 10 and 100 nm.”

Using transmission electron microscopy (TEM), the team measures the size and density of the bubbles and check whether other defects in the arrangement of the atoms, such as dislocations and loops, have formed. In parallel, they carry out numerical simulations to understand, for example, the energy of bubble or defect formation and the helium diffusion at the atomic level. The ferritic steels used in current nuclear power plants have carbon precipitates present from the outset that slow down dislocation movements and give the steels good mechanical properties. However, these precipitates dissolve at very high temperatures. The IJCLab team is interested in ODS (Oxide Dispersion Strengthened) steels containing nanometric oxide precipitates made of yttrium, oxygen and titanium, which are more resistant at very high temperatures. “We are working to characterise these conventionally and ion beam fabricated materials, before and after the incorporation of the elements, to understand how and where nanoprecipitates are formed, and what beneficial effects they have on irradiation-induced damage and gas accumulation.” Other experiments are also being carried out on tungsten or aluminium nitride. “This helps to determine the choice of materials used in future fusion reactors.”