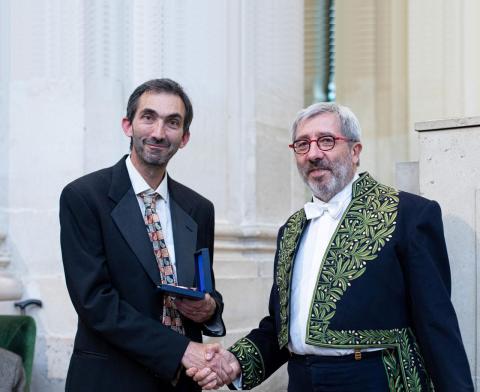 Bertrand Eynard has been a theoretical physicist at the CEA's Fundamental Research Department for twenty-five years and a professor at the Institute for Advanced Scientific Studies (IHES). He has just been distinguished by the French Academy of Sciences for his work in mathematical physics, in particular for the discovery of the universal mathematical formula called "topological recurrence". This formula, which can solve large random matrices and surface enumeration problems, has revolutionised forty years of theoretical physics.

Bertrand Eynard belongs to the mathematical physics team at the Institute of Theoretical Physics (Université Paris-Saclay, CNRS, CEA), one of three teams at the Institute. He is interested in two main fields of research that feed off each other: random matrices and enumerative geometry. " They share actually the same equations. The results we manage to achieve in one area lead to great discoveries in the other," he explains.

"We have great difficulties in particle physics computation. A dot-sized particle propagates through time and follows a linear trajectory. However, if two particles measure 0 in size and are at distance 0, the force resulting from their interaction is infinite. This is mathematically impossible," explains Bertrand Eynard. String theory corrects the problem by assuming that the particles are not dots but pieces of segments or circles, thus their trajectories are surfaces. Predicting motion means calculating the probability of reaching a final state, which is like counting the surfaces (trajectories) reaching it. It is necessary to "calculate probabilities on sets of surfaces". This requires inventing new mathematical tools able to count surfaces in spite of their extreme diversity. In 2004, Bertrand Eynard found the mathematical relationship "that could be applied to all surface problems": it was topological recurrence. It meant that "if you can count cylinders and disks, then you can count all surfaces".

For forty years, researchers have been performing their geometrical calculations mainly using methods derived from quantum mechanics. "But quantum theories exclude exact calculations on very large sets and the so-called "approximation" methods present an inherent mathematical problem: as the equation of classical mechanics undergoes successive approximations, the coefficients do not become smaller, but larger!” The researcher proposes reversing the process with topological recurrence and using geometry to solve quantum mechanics problems. This is precisely the aim of the ReNewQuantum project, set up with three other researchers, including Russian Maxim Kontsevitch, winner of the Fields Medal in 1998. This project has been awarded an ERC Synergy Grant of ten million euros for six years. A first in fundamental mathematics.

"As a child, I already had the desire to gain understanding, and I used to make my classmates carry out physics experiments without suspecting it!”, jokes Bertrand Eynard. As a young high school student, he found himself two years in a row in the prestigious Academy of Sciences as a laureate of the International Mathematical Olympiads. He won the second prize in the general mathematics competition at the age of eighteen and the regional physics prize in 1987. He continued his studies at the French ENS, defended his thesis in 1995 at the Pierre and Marie Curie University and completed two post-doctorates. He is the author of about a hundred publications and a few didactic works. Bertrand Eynard is also affiliated with the IHES and the Montreal mathematical research centre, where he frequently travels.
For this experienced marathon runner - he has crossed the Sahara and Alaska - "the synergies of gathering schools, universities, research centres and major industrial groups on the Saclay Plateau will provide very positive consequences in the long term".