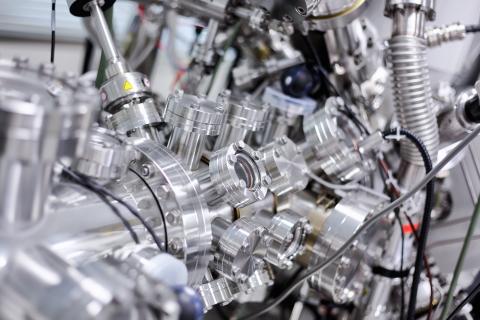 Anne Lafosse is a lecturer at the Institute of Molecular Sciences of Orsay (ISMO - Université Paris-Saclay, CNRS). She specialises in the observation of electrons, through experimental and instrumental developments for multiple applications.

Anne Lafosse obtained an engineering degree in 1997 from the ESPCI Paris. Passionate about molecular physicochemistry, she also completed a DEA (a postgraduate degree) in this field at Université Paris-Sud (now Université Paris-Saclay). "I fell in love with spectroscopy, because it offers the possibility of measuring and describing these microscopic and very complex objects that are molecules using relatively simple instruments." In 2000, she defended her thesis, dedicated to “Vector correlations in the dissociative photoionisation of diatomic molecules induced by polarised light”. This involved using a synchrotron to describe the ejection of an electron in the molecular reference frame by subjecting it to an interaction with a UV-type energy photon. This describes the chemical properties, structures and functions of the molecule. "From that point on, I developed a fascination with big instrumentation."

The instrumentation of surface science

Anne Lafosse then did a post-doc at the Fritz-Haber Institute of the Max-Planck Society in Berlin. This research centre is a benchmark in the study of the elementary steps of heterogeneous chemical catalysis - that is, the acceleration or redirection of a chemical reaction to lead it in a desired direction. "Through chemical catalysis, it is possible to form the ammonia used in fertilisers (NH3), and my work consisted of breaking this molecule down on a catalytic surface to trace the history, i.e. identify the intermediate species potentially involved." This experiment represented an opportunity for Anne Lafosse to change subject area, as she moved from the study of molecules in the gas phase to those that are deposited and grafted onto surfaces. She also changed her instrumentation, to specialise in that dedicated to surface science.

In September 2001, Anne Lafosse successfully passed the competitive exam for the position of lecturer and joined the Laboratory of Atomic and Molecular Collisions (LCAM), which has now merged with the Laboratory of Molecular Photophysics (LPPM) to form the ISMO. The ISMO had just acquired a spectrometer using the High Resolution Electron Energy Loss Spectroscopy (HREELS) technique and needed her expertise to operate it. "This was a vibrational spectroscopy approach, complementary to infrared, which uses electrons to probe systems." She continued her work on grafting molecular groups by controlling their chemical composition, applying them to a new context, that of surfaces of electronic interest. "I did a lot of work on the synthetic diamond used in detectors to give it specific electronic properties." For this work, the lecturer collaborated with the Technion, a technology and research institute in Israel.

The study of radiative damage

From the beginning of her career, Anne Lafosse has been involved in European networks in order to roll out collaborative research programmes. From 2002 to 2005, she joined the Electron and Positron Induced Chemistry (EPIC) network, dedicated to the fundamental study of electron and positron interactions with molecules. X-irradiation creates biological damage because the radiation generates ionisation phenomena, which cause chemical damage by releasing toxic electrons. "My work involves quantifying these damages with objective data, to feed modelling systems, which ultimately aim to control them." The lecturer continued this research from 2005 to 2008 and applied it to the field of radiobiology within the Electron Induced Processes At the Molecular Level (EIPAM) network.

In 2007, Anne Lafosse changed her field of application to nanolithography. She joined the Electron Controlled Chemical Lithography (ECCL), where she worked on designing chemical patterns on nanoscale surfaces using molecular devices. "Again, radiation emits electrons that have chemical impacts."  In 2013, she joined the national Chemistry for Electron-Induced Nanofabrication (CELINA) programme, and in 2016, the international Low energy electron driven chemistry for the advantage of emerging nano-fabrication methods (ELENA) programme, where she applied nanolithography to astrochemistry.

Today, Anne Lafosse continues this work, which is particularly topical since the launch of the James Webb infrared telescope, which studies the birth of organic molecules in the interstellar medium. The lecturer is involved in identifying the contribution of electrons to the creation of molecules located in ice, as well as their desorption, i.e. their release into the interstellar void.

Since 2011, Anne Lafosse has been in charge of the Master's programme in Molecular Physical Chemistry, and from 2015 to 2020, of the M2 Physical Chemistry: instruments, concepts and applications. In 2020, she became co-director of the M2 Inorganic, Physical and Solid State Chemistry. These experiences give her the opportunity to observe the evolution of students' needs and regularly propose new offers. "For example, we have changed the course catalogue to offer more modular programmes." The lecturer is also adapting the tutorials and now offers students the opportunity to work on tangible scientific publications. Lastly, she encourages concrete projects and internships.

The Graduate School Research and Higher Education of Université Paris-Saclay

Since 2022, Anne Lafosse has been Deputy Director of Education at the Graduate School Research and Higher Education of Université Paris-Saclay. The objective of this interdisciplinary organisation is to promote education in research through research at the research and education levels. To do this, the lecturer sets up mechanisms within and in support of educational structures, for all disciplines, whether chemistry, biology, physics, engineering sciences, sociology or law. For example, the Junior Multidisciplinary Congress, which took place for the first time at the beginning of June 2022, aimed to showcase the research activities carried out by students within the component institutions, constituent faculties and institutes and associate member universities of Université Paris-Saclay. "The challenge for this day is to manage to represent all disciplines and all education." The second edition is being planned.

Lastly, for students to value this type of achievement, Anne Lafosse is involved, within the framework of the European University Alliance for Global Health (EUGLOH), in the development of a skills certification tool based on micro-credits.