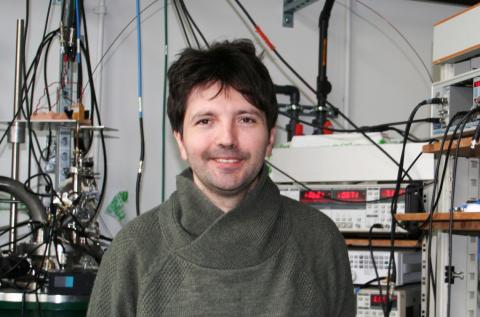 Alexei Chepelianskii has just been honored by the Académie des Sciences as the recipient of the Grand Prix Jacques Herbrand, awarded annually in either mathematics or physics (in alternation) to a researcher under 35 whose work has advanced research in that field or its non-military applications. For four years, Alexei Chepelianskii has been studying the behavior of new materials derived from his theoretical intuitions and experiments on model two-dimensional conductors at the Laboratoire de physique des solides (CNRS/Université Paris-Sud). His investigations have shed light on the behavior of particles on a quantum scale.

Alexei Chepelianskii studies the properties of matter with a view to controlling it more effectively. He devises experiments involving very pure systems such as the surface of liquid helium. At low temperatures, electrons levitate a few nanometers above the liquid helium and move a few dozen micrometers without encountering any impurities. Their quantum properties are revealed via their interaction with light and photons of about 100 GHz. This interaction leads to the formation of unusual – i.e. zero resistance or incompressible – states of matter that have yet to be described in precise theoretical terms.

The spectroscopy techniques used by Alexei Chepelianskii to investigate two-dimensional conductors in the domain of millimetric waves (photons of about 100 GHz) enable him to probe the spintronics in organic materials. Here, he encounters rapid diffusion processes and numerous impurities. This fundamental physics research paves the way for some very promising applications. One of these may be an alternative to silicon-based solar panels, which require deployment of fairly heavy technology to cover large surface areas. "Obviously, finding materials easy to install over large surface areas, perhaps flexible, would be of great benefit," points out Alexei Chepelianskii. "I'm working on films of photoabsorbing organic molecules that may one day be used in new-generation photovoltaic cells." Alexei Chepelianskii did experimental work in this area during his postdoctoral research in the United Kingdom, but argues that his current research does not seek direct applications. "We're exploring new materials, trying to understand how they work by studying spin-dependent processes that will set fundamental limits to the efficiency of any solar cells made from these materials," he explains.

From Russia with love... of research

Alexei Chepelianskii knew early on that research was for him. He came from a family of Russian physicists that settled in France, where he graduated from École Normale Supérieure and Université Paris-Sud, then defended his PhD thesis in 2010 at the Laboratoire de physique des solides (CNRS/Université Paris-Sud). He did postdoctoral research at Cambridge University and made a series of short stays at the Low Temperature Physics Laboratory at the RIKEN advanced science institute in Japan, where he developed experiments to confirm his theory about states of zero resistance at the surface of liquid helium at low temperatures. Returning to France in 2014, he came to work at the Laboratoire de physique des solides. Four years later, he is "proud and honored" to get this award in recognition of his work, theoretical as well as experimental, and to join the ranks of young Grand Prix recipients.