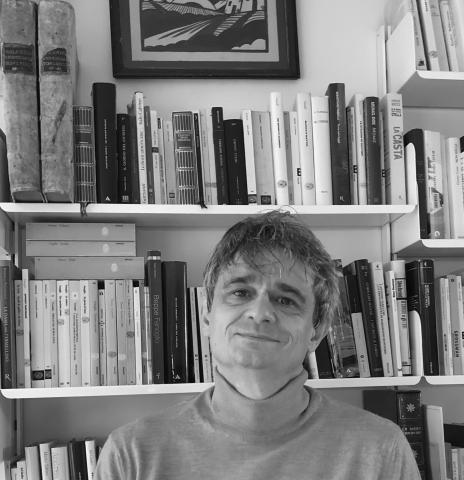 Achille Stocchi is the director of the brand new Laboratoire des deux infinis - Irène Joliot-Curie (IJCLab - Université Paris-Saclay, CNRS), which includes the five laboratories of the Orsay campus working on all aspects of 2-infinite physics. Passionate about teaching, this particle physics specialist is also responsible for creating two international schools in Eastern Europe and the Middle East.

Specialising in particle physics and more specifically in quarks b, Achille Stocchi has worked with particle accelerators around the world under the Laboratoire de l’accélérateur linéaire (LAL - Université Paris-Saclay, CNRS), which he has led since 2011.

A commitment to education without borders

As a Professor at Université Paris-Saclay, Achille Stocchi attaches great importance to education, alongside his research activities. He has mentored various young students and theses, and continues to do so. Stocchi, together with other colleagues, is also responsible for creating two schools abroad: the first in Eastern Europe – the TESHEP (Trans-European School of High Energy Physics) – and the second in Palestine, two areas which he visits several times a year.

"These two schools are the result of personal contacts and stories of people with whom I have worked”, says Stocchi. TESHEP is the result of the work carried out several years ago with Sergey Barsuk, who is of Ukrainian origin: We found that with the collapse of the Soviet Union and the Eastern bloc, many people went abroad and young people no longer had access to modern and contemporary physics, while still having a high level of education”.

Given this situation, Stocchi Achilles and his colleagues created a teaching project in a Ukrainian university in the area of high-energy physics. The project has been highly successful and stood the test of time: the project is now in its 13th year. A winter school and summer school is held every year in Ukraine or a neighbouring country like Poland or other Eastern European countries (Romania, Serbia, etc.).

With this experience, in 2015, Achille Stocchi and his colleagues launched a similar project with the An-Najah University in Palestine. This project is based on a strong relationship with a former student (Ahmed Bassalat) and involves the creation of a winter school. “The project is starting to work well; I am very pleased. The President of this university is a truly exceptional person. Perhaps slightly thanks to us, this university is beginning to have an impact in the Middle East, and to gain a mention in the rankings. Even today, CERN recognises this university as a benchmark for research in high-energy physics in the Middle East outside of Israel, which is very strong in the field”, Achille Stocchi is proud to say.

Another project which is dear to Stocchi Achilles’s heart is the creation of the IJCLab, named in honour of Irène Joliot-Curie, who is behind the creation of the Orsay scientific – and later university – campus. This Lab is the result of a merger with 5 physics labs: the Centre de sciences nucléaires et de sciences de la matière (CSNSM), the laboratoire Imagerie et modélisation en neurobiologie et cancérologie (IMNC), the l’Institut de physique nucléaire d'Orsay (IPNO), the Laboratoire de l'accélérateur linéaire (LAL) and the Laboratoire de physique théorique (LPT).

“These labs have always closely collaborated, says the researcher. They were created almost simultaneously and were there at the birth of the Orsay campus. The buildings are intertwined geographically and scientifically, and the research they carry out is rather connected. Researchers are studying 2-infinite physics, i.e. the fundamental interactions that govern the infinitely small side of particle physics or the infinitely large, observed in astrophysics, cosmology, etc.”

In 2016, then director of LAL, Stocchi Achilles had the idea to bring together the five physics laboratories of the Orsay valley under a single entity. The goal was for them to join forces to have a greater impact in various areas of research and to participate in projects on a larger scale. It is geared towards CERN projects – major projects in nuclear physics, including the construction of large accelerator detectors or space projects in cosmology.

An advanced laboratory as a great joint adventure

This new laboratory is organised into seven divisions: astrophysics, astroparticle physics and cosmology - accelerator physics - high energy physics - nuclear physics, theoretical physics - energy and environment - physics and health. Each of the merged laboratories existed beforehand but separately. By pooling together, they are now stronger. “We wanted to create a basic research laboratory with two divisions with a strong societal impact: one on physics and health, and one on energy and the environment. Another strong axis is the presence of a major theoretical physics division”, Achille Stocchi explains.

The researcher continues: "The backbone of the laboratory is made up of the Engineering division, which includes technical services with a high level of expertise. It is organised into four departments: electronics, IT and computing, instrumentation and mechanics. This unlocks unique potential to design, develop and operate the tools needed to rise to the scientific challenges of the coming decades, in accelerator and detector physics in particular. IJCLab is therefore recognised as a "laboratory maker". The IJCLab also features a large body of research infrastructures and technological platforms”.

The results of this union are expected to come in over the coming months. This will involve various indicators: increased international collaboration and visibility, greater participation in projects for the construction of instruments or parts of instruments for physics. For now, Achille Stocchi is grateful: "It is too early to look back as we are still in the thick of it; however, I can already say that the creation of this laboratory is proving to be a great adventure. There has been no shortage of tension or opposing views, but we’ve all engaged and come together with a spirit of discussion and reflection, by forming working groups, etc. We have held votes and consultations and carried out surveys. Something like this is not created just based on the idea or decision of one person. I have a cohesive team around me, with strong personalities. For me, the key to success is cohesion, sharing and mutual trust. It is a truly exciting joint adventure!”