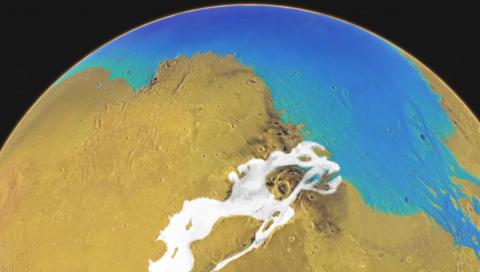 A stable ocean on Mars three billion years ago

The history of the climate of Mars still bears many questions. An international team including researchers from the Paris-Saclay Geosciences Laboratory (GEOPS - CNRS/Univ. Paris-Saclay) have released new findings demonstrating that approximately three billion years ago, the Martian climate could have been both wet and cold. Their work was published in the journal PNAS on 18 January 2022.

The presence of liquid water on Mars in the distant past has now been proven, mainly because it can explain the existence of river valley networks. However, the presence of an ocean and its lifespan and age remain a mystery. Previous climate models have not been able to confirm the existence of large bodies of water, even going back 3.5 to 4 billion years. Previous models appear to show that water accumulated in the highlands of Mars as snow. The results of a new study led in collaboration with a team from the Paris-Saclay Geosciences Laboratory (GEOPS – CNRS/Univ. Paris-Saclay) and the NASA Godard Institute for Space Studies could disprove this theory.

The researchers carried out new simulations integrating two new elements which proved to be essential: ocean circulation and glaciers. By adding these two processes, the climate simulations predict a stable circumpolar ocean in the northern hemisphere approximately three billion years ago, even for global average Martian temperatures below freezing (0°C for pure water), due to the ocean’s circulation which could have warmed the surface up to 4.5°C. The simulations predict the presence of glaciers which would have transported ice from the highlands to the ocean, in agreement with geological observations from orbiting spacecraft. The climate was most probably cold in the equatorial regions, but the circumpolar ocean may have remained liquid, in agreement with geological observations such as a paleo shoreline or mega-tsunami deposits which indicate the presence of an ocean.

If the scenario proposed by the researchers is correct, our sister planet could have been habitable before becoming the Red Planet. In the same epoch on Earth, life began to populate a large number of ecosystems.

These results should be confirmed with new in situ data provided by the Chinese rover Zhurong, situated in the area that was once covered with water.