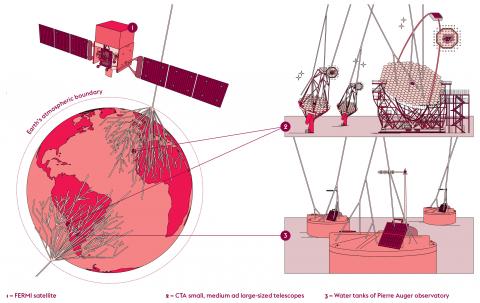 Cosmic radiation carries particles with phenomenal energy from its origins to its arrival on Earth. In order to better understand it, researchers are following the traces left in the sky and on the ground.

Cosmic radiation, which was discovered in 1912 by Victor Hess, the Austrian physicist, has always fascinated people as much as it has raised questions. Originating from meanders through the interstellar medium, these rays, invisible to the human eye, bombard the Earth with a steady stream of particles made up mostly of protons, as well as helium nuclei and some heavier atomic nuclei. Their energy is spread over 11 orders of magnitude. Although very rare, the most energetic possess extraordinary energy. “We are talking about macroscopic energies of the order of 1020 electron volts (eV), i.e. more than 10 joules, carried by particles one millionth of a billionth of a metre (10-15 m),” explains Thierry Stolarczyk, a researcher at the Department of Astrophysics (DAp – Université Paris-Saclay, CEA/Irfu).

How and where do these particles acquire their phenomenal kinetic energy, enough to score an ace at Roland-Garros? What are the physical processes and astrophysical material at their origin? These are some of the mysteries that astrophysicists at Université Paris- Saclay are trying to unravel in order to take us one step closer to understanding the Universe.

Where are the sources?

Replicating such phenomena in the laboratory is, however, a challenge. The world’s most powerful particle accelerators produce proton beams of “just” a few TeV (1012 eV) at most. As a result, scientists are scanning both galactic and extragalactic space in search of these energetic particles. Supernova remnants, neutron stars and gamma-ray bursts (γ) are among the sources being explored. “If a very massive star runs out of hydrogen or helium to burn, it collapses in on itself and instantly creates a compact star, a black hole or neutron star. The outer layers fall on it, rebound off it and are thrown into galactic space. They sweep up the interstellar matter and push it into a wave that accelerates particles, electrons and protons,” explains Thierry Stolarczyk. “These particles locally create γ-rays, which continue their trajectory in a straight line without stopping and are very good indicators of an upstream cosmic proton.”

The γ-ray bursts themselves are very brief emissions that come from the explosion of a massive star at the end of its life or the coalescence of two compact stars. “It is thought that these are sources of cosmic radiation because they are linked to very violent events which give rise to a strong acceleration of particles,” says Fabian Schüssler, a researcher at the Department of Particle Physics (DPhP – Université Paris-Saclay, CEA/Irfu) and a specialist in such phenomena. However, as Thierry Stolarczyk points out, “Cosmic radiation probably does not just originate from a single source, as several types of sources are needed to explain the energy spectrum and flux which have been observed.” 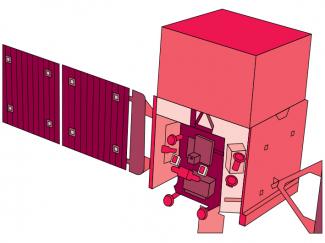 Succeeding in tracing cosmic rays is a real puzzle, because, “the cosmic rays are charged and so are deflected by the magnetic fields they pass through on their journey to Earth,” adds Thierry Stolarczyk. Since γ-rays come from the same suspected sources as cosmic rays, researchers are using γ-ray astronomy to try and find a way ahead. As these rays are neutral, they travel through space in a straight line. At low energy, the fluxes are large enough to be detected by sensors on board satellites, such as FERMI. Above 10 GeV (109 eV), detectors with a much larger surface coverage are required and observatories on Earth are needed, such as H.E.S.S. in Namibia or the CTA, which is under construction in the Canary Islands and Chile.

Like cosmic rays, γ-rays collide with the atomic nuclei of the air as they enter the Earth’s atmosphere. The energy of this impact produces secondary particles, which then collide with other atomic nuclei in the air, in turn emitting other particles and so on, until the energy of the original particle has been fully distributed among the thousands of billions of particles created.

While the shower triggered by a γ-ray is made of γ-photons, electrons and positrons, the one triggered by a cosmic proton comprises mostly pions, which disintegrate into neutrinos (which are difficult to detect) and muons. For a short time, the particles in these showers exceed the speed of light in the air and produce a Cherenkov effect in the atmosphere, or the emission of bluish light. By detecting directly these particles or the emitted light on the ground using telescopes, scientists are able to trace the direction and energy of the incident particle and the position of the source in the sky above.

Pierre Auger, which covers 3,000 km2, is one of the largest terrestrial observatories dedicated to the study and measurement of very high-energy cosmic rays – those above 1018 eV. At such levels of energy, the rays travel so fast that they are hardly deflected during their journey. Auger’s 1,600 detectors, or water tanks, then collect on the ground particles from the shower using the Cherenkov light produced. “This determines the lateral profile of the shower – the density of the particles arriving on the ground based on the distance from the axis of the shower. Thanks to this pattern, we can trace the energy of a cosmic particle at the heart of the shower. For maximum accuracy, we cross-reference our measurements with those from fluorescence detectors,” points out Isabelle Lhenry-Yvon, a researcher at the Laboratory of the Physics of the Two Infinities – Irène Joliot-Curie (IJCLAB – Université Paris-Saclay, CNRS) and a member of this collaboration which brings together over 400 researchers from 18 different countries. 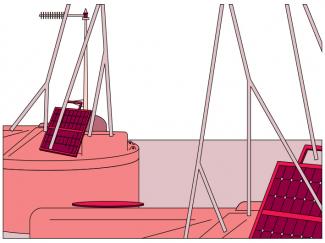 In addition to the water tanks, 24 fluorescence telescopes, equipped with photomultiplier cameras, record on a clear night and in different pixels the fluorescence emitted by a shower over time. “A shower has an extremely dense core of particles. These excite the nitrogen molecules in the air which become de-excited by emitting fluorescence– this is very focused along the shower’s axis. Its longitudinal profile is then obtained and its energy level can be determined by analysing its distribution.” As the deploying follows a well-defined process (the shower starts, swells and then decreases when the energy becomes too low and it no longer has power), the researchers can establish the maximum of development. This point corresponds to the altitude at which the shower contains its maximum amount of particles. “This altitude depends on the mass of the incident cosmic particle. The heavier it is, the higher the maximum development will be in the atmosphere. This allows us to tell if the cosmic ray was light or heavy,” says Isabelle Lhenry-Yvon.

The goal is getting closer

Her colleagues have recently demonstrated the anisotropy of cosmic rays. “For energy above 8 ×1018 eV, cosmic rays come mainly from a direction which is 125° from the galactic centre, i.e. from extragalactic space.” By correlating catalogues of objects already recorded and events at even higher energy (above 40×1018 eV) observed by Auger, they have succeeded in pinpointing, in the catalogue of starburst galaxies, two zones in the sky which are visible from the Southern Hemisphere as potential sources of cosmic rays. “We will soon be working with the Telescope Array experiment, which is located in the Northern Hemisphere, to see if we can find a third zone,” says the researcher.

With the AugerPrime programme, all the site’s electronics are currently being redone and scintillation detectors will be installed above the tanks by the end of 2020. “We will then be able to better evaluate the proportion of muons present in the showers, add constraints to the models of the development of these showers and become more accurate,” says Isabelle Lhenry-Yvon.

Revolutionizing the exploration of the sky in γ-rays

Explorations are also going well in the field of γ-ray astronomy. Fabian Schüssler and his colleagues have recently observed very high-energy emissions in γ-ray bursts thanks to data from H.E.S.S. This is a world first, which will enrich present models. “These γ-ray bursts give rise to a violent jet of particles which are accelerated at high energy. In simple models, these are electrons which produce synchrotron light which is visible in X-rays. Other electrons in the stream then transfer their energy to these photons which become very high-energy γ-rays,” explains Fabian Schüssler. Contrary to all expectations, researchers still detected these ten hours after the start of a γ-ray burst. “By measuring their spectrum and time of arrival, we can trace back to the accelerated electrons and obtain information on processes and time scales.”

In the start-up phase, CTA – Cherenkov Telescope Array - will have the task of observing a large area of the sky in γ-rays in order to better understand the γ sources already listed and to detect new ones. This international project is bringing together 31 countries and 1,500 people from over 200 institutes, including 232 French researchers from 16 laboratories. Researchers from Université Paris-Saclay are heavily involved. The Departments of Astrophysics (DAp), Sensor Electronics and Computer Science for Physics (DEDIP), System Engineering (DIS) and Particle Physics (DPhP) from CEA Irfu, and IJCLAB are all contributing their expertise.

Its 118 telescopes – small, medium and large – each equipped with a camera, will record every single Cherenkov photon reflected by the mirrors. The NectarCam, whose integration is being managed by CEA/Irfu, is one of the two models that will equip medium-sized telescopes. Photomultipliers implanted in the cameras will transform the Cherenkov blue light into digital signals. The CTA will scan the entire galactic plane – including the galactic centre – and probe extragalactic space. By 2025, its scientific capacity will have been reached. The observatory will be able to operate for 30 years.

The art of distinguishing between γ-photons and protons 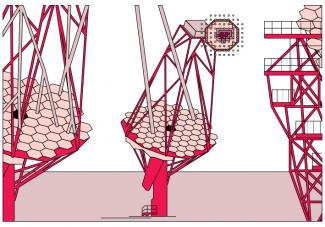 At the moment, Thierry Stolarczyk and his team are developing the chain of analysis for data collected by the cameras. This software will be routinely used to process the raw images collected by the telescope cameras. The challenge is to correctly distinguish a shower of particles initiated by a γ-ray from one initiated by a cosmic ray, which are 100,000 times more numerous.

This program will first clean up the images and eliminate the background noise of the night. It must then know how to recognize the signal from a shower of γ-rays by using its geometrical characteristics. Finally, thanks to the ten or so telescopes involved on average in an observation, it should be able to reconstruct the light intensity and direction of the shower in the atmosphere.

To develop such a program, researchers are carrying out a series of simulations including the production and propagation of γ rays and cosmic protons and then the detection and digitisation of Cherenkov photons, which they compare with real data. They are also using machine learning to teach a code to recognize a γ-photon from a cosmic proton. They are also helping to provide a number of scientific tools (computer and mathematical programs) to analyse the map of the sky, decode its images and detect the presence of a source. “Today, thanks to the FERMI satellite, there is a list of over 3,000 sources of high-energy γ-photons. Thanks to H.E.S.S., the TeVcat catalogue lists about 250 TeV γ-ray sources. We are hoping, with the CTA, to multiply that number by 10!” says Thierry Stolarczyk excitedly. In this way, another step closer in understanding can be taken.