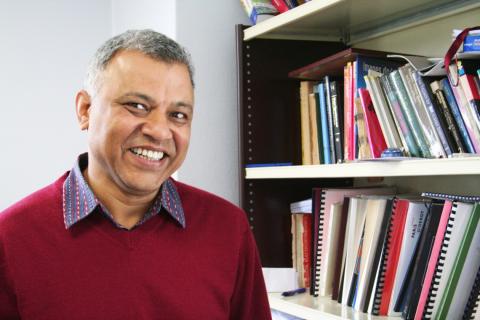 Satya Majumdar is Research Director at the Laboratory of Theoretical Physics and Statistical Models (LPTMS - CNRS/Université Paris-Sud, Université Paris-Saclay). In 2019, he received the CNRS silver medal and the European Physical Society's (EPS) prize in statistical and non-linear physics for his outstanding contribution to research in the field of statistical physics of complex systems.

Satya Majumdar studies complex systems that consist of a large number of degrees of freedom interacting with each other. "The key question in statistical physics is to understand how this macroscopic behaviour emerges from interactions observed at a microscopic level," he explains. As for the atoms present in a fluid such as water. "When its temperature is changed, water evolves in three macroscopic phases. Below 0°C, it is solid, then becomes liquid when heated, and finally turns into a gas when its temperature reaches 100°C." These "phase transitions" have fascinated physicists for several decades.

Another remarkable property is the universality of these macroscopic behaviours which, to a large extent, are independent of the microscopic details of the system. This universality is often attributed to the existence of large statistical fluctuations in the vicinity of a phase transition. "The physicist's goal is to understand and model these fluctuations, which can be very important during these transitions," explains Satya Majumdar. "Physicists have always been interested in the concept of universality seen in their experiments. Statistical physics then becomes a tool for other fields, such as chemistry, biology, computer science, economics, etc." This opening of statistical physics to other disciplines is precisely what motivates the researcher's work.

These large amplitude fluctuations also play an important role in other areas of science. Natural disasters (earthquakes, typhoons, tsunamis) are of particular interest to Satya Majumdar, "because these rare but devastating events are caused by very large fluctuations that can be characterized and modelled". His important work on these atypical fluctuations has thus revealed a third order phase transition associated with the famous Tracy-Widom probability law in random matrices, suggesting the universality of extreme behaviours in a wide variety of systems.

From Calcutta to Saclay

Born in Calcutta, Satya Majumdar studied there. He holds a thesis from the Tata Institute of Fundamental Research in Bombay. After two post-docs in the United States (the first at AT&T's Bell Labs, the second at Yale University), he obtained a permanent research position at the Tata Institute in Bombay in 1996. He joined the CNRS in 2000 at the theoretical physics laboratory of University of Toulouse. In 2003, he joined the Laboratory of Theoretical Physics and Statistical Models (LPTMS) in Orsay.

Today, he says he is "proud" to receive the silver medal from the CNRS, as well as the prize of the European Physical Society (which he shares with Sergio Ciliberto, researcher at ENS of Lyon). The Indian researcher particularly appreciates the French model "which guarantees great freedom for fundamental research". Moreover, the saclaysian environment allows him to broaden his horizons and approach a wide range of disciplines: "Modern science is very collaborative, we are always exploring new research topics."