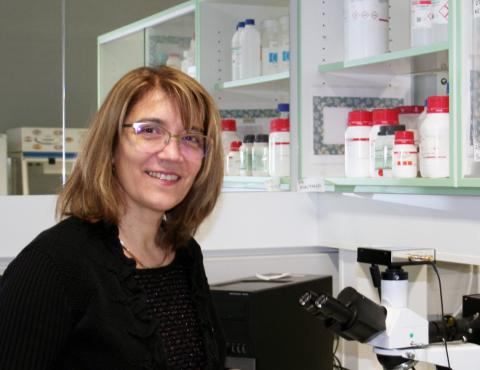 Ruxandra Gref is a research director at the Molecular Science Institute of Orsay (ISMO - Université Paris-Saclay, CNRS) and winner of the Seqens 2020 prize from the French Academy of Sciences for her work on nanomedicines for the treatment of infections and cancer. She was awarded the CNRS Silver Medal in 2019, and in 2018 she also received the Stars of Europe jury special prize for her coordination of the Cyclon Hit project. At the interface between chemistry, physics and biology, this project yielded considerable success in developing novel drug delivery systems to fight antibiotic-resistant bacteria.

After a Master of Science degree at Université Paris-Sud, Ruxandra Gref graduated from the École nationale supérieure des industries chimiques (ENSIC) in Nancy. Specialized in process engineering, she did an "introduction to research" internship, developing new extraction methods using ultra-thin films that she made herself from polymer materials. "Thanks to these materials, we were able to selectively extract minority compounds from complex mixtures, such as water pollutants or a reaction product as it is being produced." The internship was a revelation, inspiring Ruxandra Gref to go into research.

After her thesis, she left for a year of postdoctoral research at Massachusetts Institute of Technology (MIT) in Cambridge on a scholarship from France's Ministry of Foreign Affairs. "Out of curiosity, I had been reading articles outside my field of study. I learned that MIT researchers were using polymer materials to create drug reservoirs enabling targeted, controlled release. Motivated by the discovery of this biomedical application, I took an important step and decided to change fields." Returning to France in 1992, Ruxandra Gref joined France's national scientific research center (CNRS).

Throughout her career, Ruxandra Gref has been involved in collaborative projects, especially European ones. The first was Cyclon (for "cyclodextrin network"), which got underway in the mid-2000s. The idea was to insert drugs into tiny cavities (hydrophobic on the inside and hydrophilic on the outside) formed by cyclodextrins, seeking to improve treatment of particular types of cancer. "This cage-like system solubilizes and protects the drugs and increases the efficiency of delivery." Nine research teams from different European countries and different academic fields cooperated closely within this consortium. In Ruxandra's opinion, this was the key to success. "Our international team worked together closely and efficiently. Twice a year, we held workshops and summer schools all over Europe."

The same consortium then tackled a second European venture, Cyclon Hit, a Europe-funded project targeting antibiotic-resistant bacteria. "It was a huge challenge," commented Ruxandra Gref, project coordinator, "but, in the end, we exceeded our objectives. In addition to 80 publications, three patents and numerous summer school sessions and workshops, we held a conference in 2016 at the Institut Pasteur in Paris that attracted more than 200 participants." In her view, the 2018 Stars of Europe award "honored the collective work and energy shown by all of the teams involved."

According to Ruxandra Gref, "research is not just a job, it's a passion!" She already has a third European project on the horizon. "It is perfectly possible for basic research to further societal purposes. With its amazing concentration of labs, businesses, disciplines and expertise, Saclay is the perfect place for out-of-the-box ideas to germinate."

The emergence of bacterial strains that resist treatment is a phenomenon with serious societal consequences that gives great cause for concern. The Cyclone Hit project aims to improve the efficacy of antibiotics by incorporating them into cage-like supramolecular assemblies. Using this strategy, it is possible to overcome biological barriers and deliver the antibiotic into the infected cells. As a result, drug doses can be reduced and treatment efficacy increased.