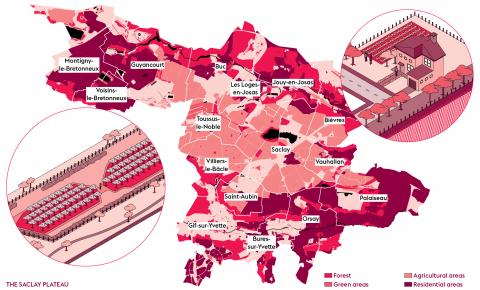 Researchers, farmers, local associations and local authorities are working together to develop research projects on the Saclay plateau.

Society’s expectations of agriculture have changed in recent years and farmers have often been caught off guard. “They are being asked to modify long-standing practices and the transition to new systems is not always easy. The prospective nature of research means it can be used to find answers and help farmers plan for the future without putting their farms and employees at risk,” explains Dorian Spaak, general coordinator of the association Terre & Cite (Ground & City). He is working with Universite Paris-Saclay’s BASC LabEx (Laboratory of Excellence for Biodiversity, Agroecosystems, Society, Climate) to develop research projects involving researchers and other actors on the Saclay plateau.

The plateau has a lasting agricultural tradition. Since the installation of the CEA in the 50s, this natural region of Ile-de-France has gradually become an important centre for education and research. When the BASC LabEx was created in 2010, there were few exchanges between researchers, farmers and associations. Yet “the life sciences faculty was and is very strong,” remarks Dorian Spaak. The LabEx comprises fourteen research laboratories working on agroecology and socio-ecosystem dynamics when climate change is a burning issue. Terre & Cite and BASC gradually worked together more closely, and in 2015, the association applied for the European rural development programme LEADER. The LabEx provided support with funding. Meetings between local actors and researchers were organised and in 2016, the first joint projects were launched.

“Through the LEADER programme, we supported research projects with complementary themes in order to increasingly work on more concrete issues involving the public and private sector and associations. The joint development of projects is the strength of this programme, ” says Dorian Spaak. “There is genuine exchange that ensures the projects are interesting to researchers, farmers and local communities, and really meet the region’s needs,” confirms Paul Leadley, coordinator of BASC LabEx.

Coming soon – a conservatory orchard on the plateau

Since then, many projects have been developed, such as the project led by Amandine Cornille, from the Quantitative Genetics and Evolution laboratory – Le Moulon (GQE – Universite Paris-Saclay, INRAE, CNRS, Agro- ParisTech). An experimental and educational conservation orchard on the edge of the Saclay plateau will develop a heritage collection of crabapples (Malus sylvestris), an ancestor of some current varieties of cultivated apples (Malus domestica). The project benefits from LEADER funding and involves a wide variety of local, regional and national actors: farmers and local associations from the plateau, agricultural colleges and local business, the green spaces department for the Ile-de-France region, the Paris-Saclay community, the Paris-Saclay public development institution, the French agroforestry association and the French National Forests Office. The project also involves geneticists, ecophysiologists, climatologists and ecologists from the Institute of Diversity Ecology and Evolution of Life (IDEEV – Universite Paris-Saclay, CNRS, AgroParisTech). The orchard will be a source of seeds and grafts and will be an educational source for popularising science, an experimental research centre, and a pilot site for the conservation of local diversity.

How did it come about? It was observed that the genetic integrity of the crabapple was endangered. “It was shown that, with natural distribution in Europe, 23% of the populations hybridize locally with the surrounding cultivated apple,” explains Amandine Cornille. To blame were mechanisms for gene transfer – or introgression – from the genome of the cultivated apple to crabapple genomes. Researchers updated the existence of five genetic groups (or populations) of the European crabapple. They showed that the seeds sold in private nurseries in France under the name Malus sylvestris are either hybrids or from cultivated apple seeds. This proves that the crabapple seeds used for a European reforestation program come from a single clone.

“Oaks and beech are the most studied trees. However, very little is known about how fruit species, such as the crabapple, respond to global warming and the emergence of new pests or pathogens. By studying its genetic diversity, we could find adaptation genes there, and try to “introgress” them in cultivated apple species to improve them long term,” remarks Amandine Cornille. 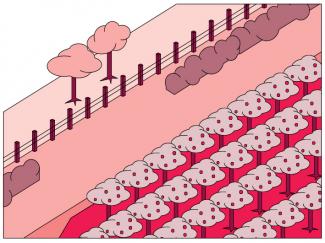 The orchard will be planted on a one-km2 plot with natural pest control near the future IDEEV building, currently under construction on the Saclay plateau. In autumn 2020, 400 apple trees will be planted there. They will all be genetically characterized and derived from the germination of crabapple seeds from all over Europe. Eventually, only 120 will remain. “We will observe whether certain genotypes die or grow more easily, and if local populations, such as Fontainebleau, adapt better.” A bocage hedge will surround the orchard. The species in the hedge have been studied to promote natural colonisation in the orchard. The hedge will include local species of shrubs and yearround flowering will provide a source of food and shelter for local fauna.

Some crabapple trees will be planted on the Orsay campus or donated to farmers. “We also plan to organise events for the general public.” As part of this activity, Diagonale Paris-Saclay is funding the production of information panels and educational booklets. “Eventually, we want to duplicate the project in the North and South of France, then in Europe (Romania, Denmark, Spain) to see how the five crabapple genetic groups react in different geographic areas,” says Amandine Cornille.

Interested in rural development issues in Ile-de-France, Romain Melot from Science for Action and Development Unit: activities, products, territories (SADAPT – Universite Paris-Saclay, INRAE, AgroParisTech) and Emmanuelle Baudry, from the Laboratory of Ecology, Systematics and Evolution (ESE - Universite Paris-Saclay, CNRS, AgroParisTech) are crossing their expertise with the TerriBio Saclay project that studies cultivated spaces in the peri-urban environment. The project, part of a local public action, focuses on domestic gardens and fields, seen as potential vectors of biodiversity and social representation. “These open spaces provide a number of ecosystem services but have not yet been closely investigated,” comments Romain Melot. The study will take place on an individual and regional scale, “because some of the ecological processes take place at distances that go beyond the surface area of the gardens,” explains Emmanuelle Baudry.

TerriBio Saclay is the continuation of preliminary work carried out in 2018 thanks to Emergence funding from MSH Paris-Saclay, for which it received Excellence funding in 2019. The team, which includes a sociologist, geographer, ecologist, ethno-ecologist and environmental psychologist, will conduct a series of surveys throughout summer 2020. They will ask local stakeholders to respond individually or as a group to a questionnaire on their perception of the ecosystem services provided by these open and cultivated spaces. They will also propose a closed questionnaire door-to-door to a target sample of approximately 100 gardens in the plateau area, identified by photo interpretation. In the next stage, some of the original sample will voluntarily participate in semi-structured interviews. The data will be analysed in autumn and results will be reported at the end of 2020. 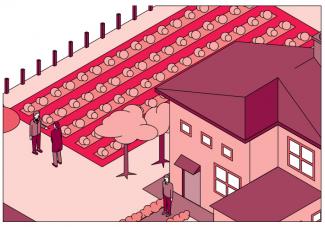 The project aims to question the relation between nature and Saclay plateau users, residents, inhabitants, workers and students, “and the importance of their life-course approach,” comments Romain Melot. “We know that there is a very strong relationship between the environment – whether it be urban or rural – in which a person has grown up and their degree of sensitivity to nature and motivation to protect it. The more contact they had with nature as a child, the more motivated they are by its protection. But the age range that develops such sensitivity is not precisely known,” adds Emmanuelle Baudry. “With Terre & Cite, we will also investigate whether the students still are in that sensitive age range.”

The aim of TerriBio Saclay is to assess the contribution of gardens and fields to biodiversity. “Plants and pollinators live on scales and at distances for suffice for them as their habitat,” says Emmanuelle Baudry. “And for many people in peri-urban areas, the garden is the main interaction they have with natural biodiversity.”

Researchers will also study the social impact of gardens. While domestic gardens are often seen as a private domain, several sociological studies observe the opposite. “The garden provides opportunities to meet with neighbours, swap information and offer produce,” says Romain Melot. The project will also examine the contribution of gardens to household consumption and the consequences of the prohibition of the use of phytosanitary substances by non-professionals (French Zero Phyto law in January, 2019).

Finally, researchers will clarify services provided by these open and cultivated spaces, appreciated by peri-urban residents. For policymakers, this study will provide new information to help them adjust measures. “Some of the measures that benefit biodiversity are often perceived negatively. For example, leaving dead leaves in communal areas to provide organic matter is seen as a lack of maintenance,” says Emmanuelle Baudry. “Due to the housing crisis in Ile-de-France, many households are converting part of their garden into rental accommodation. Such spontaneous densification is more or less authorised after the event by municipalities. Correctly analysed, this could help to solve housing problems. It is however a problem if it results in anarchic concrete constructions motivated by personal gain,” says Romain Melot.

Vital roots in the area 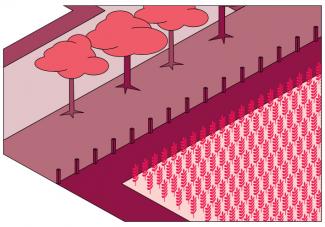 There are plenty of projects on the Saclay plateau... Some for organic farming and recycling organic matter to improve soil and yields, or for mixing wheat varieties that are more resistant to disease. Others study the impact of the University’s development on soils and carbon storage. “The plateau is a life-size playground for the development of new synergies and for the implementation of more sustainable and resilient systems,” says Dorian Spaak. “Despite many changes, it has retained a coherent and functional agricultural core, both geographically and socially. And the concentration of researchers is quite exceptional. What’s more, with the arrival of AgroParisTech in 2021, a quarter of French agronomic research will be located there. That’s impressive!”

Such excellence is part of the area’s reality, connecting students and researchers to major societal issues. “I’m pleased to see that the University is working closely with farmers and local communities to develop strong local roots. It is important to protect farming land, green spaces and forests in this peri-urban area of Paris,” says Paul Leadley. This feeling is shared by the President of the University, Sylvie Retailleau: “The University’s local involvement is as important as its international involvement. It’s impossible to create an important university without involving the local community – local actors and citizens – and without them knowing what is going on in the labs.”