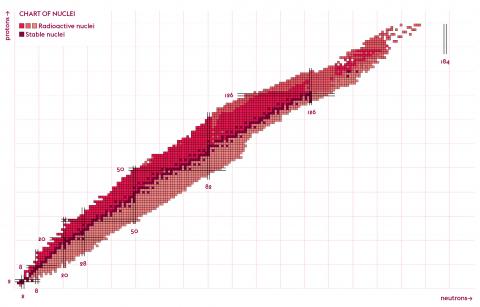 The proliferation of nuclides through nuclear physics - L'Edition 13 (june 2020)

Made up of protons and neutrons, atomic nuclei are the building blocks of matter – yet they remain shrouded in mystery. Intrigued by their properties, researchers at Université Paris-Saclay are investigating the nuclear reactions and astrophysical sites around the Universe that give rise to chemical elements.

Discovered and modelled by Ernest Rutherford in 1911, the atomic nucleus has proved to be extraordinarily complex. Indeed, nuclear physicists today know that things are nowhere near as simple as they first appeared. With a diameter of about a femtometer (10-15 metres), this assembly of particles in an atom – protons (positively charged) and neutrons (neutral) – orbited by electrons (negatively charged) has yet to reveal all its secrets. These elementary components of matter display a great variety of internal structures, lifetimes, forms and behaviours, all of which are relentlessly studied by researchers at the University. Amongst other things, their research aims to describe how the Universe’s various chemical elements, some of which can be found on Earth, are for med. Each of these chemical elements has a precise number of protons (Z). Nuclei with an identical Z but a different number of neutrons (N) are said to be isotopes.

There are currently 291 naturally occurring stable or quasi-stable nuclides on Earth. Often doted with a greater number of neutrons than protons, these nuclides have lifetimes of at least several hundred million years. At present, the heaviest known stable nucleus is lead-208, with 82 protons and 126 neutrons. Thorium-232, uranium-235 and uranium-238, while not completely stable, are also present in the earth’s crust. Some nuclides – those that have 2, 8, 20, 28, 50, 82 or 126 protons or neutrons – are said to be magic or even doubly magic. These nuclides are particularly stable due to phenomena of quantum mechanics at work within them.

Pushing the limits of the nucleus

To explain these phenomena, scientists are using the nucleus as a kind of research lab. “We create the conditions required to bring out new properties. We enrich the nucleus with protons or neutrons, for instance, or we investigate those at the uppermost boundaries of mass (the superheavy nuclides) to see how they resist, as we seek to define the terms of nuclear interaction and understand its primal origins,” says David Verney, researcher at the Laboratory of the Physics of the Two Infinities - Irène-Joliot Curie (IJCLAB – Université Paris-Saclay, CNRS). 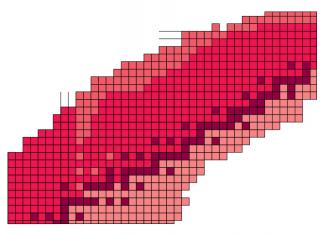 Thanks to the appearance of nuclear reactors and particle accelerators in the last few decades, nuclear physicists around the world have artificially created nearly 3,000 other nuclides. All are unstable or radioactive: they transform into other, more stable nuclides either through radioactive decay (α, β), through fission (nucleus splits into two), or by emitting γ photons without altering their nature. Some have such short lifetimes that they barely have time to surround themselves with electrons and form an atom. Predictions estimate that there remain 3,000 to 5,000 exotic nuclides to be discovered.

A double entry table – the chart of nuclides – lists all these nuclides according to their number of protons and neutrons, incorporating a third aspect: their degree of stability (lifetime). This array of boxes, some of which are still empty, reveals a very distinctive median set: the valley of stability, grouping together all the stable or quasi-stable nuclei. On either side of this valley lie the unstable nuclei, which seek to reach stability through nuclear decay.

In nuclear reactors, radioactive nuclides are produced either through the capture of neutrons or protons, or through fusion of nuclei. For example, uranium-238 (Z=92 N=146) captures a neutron and transforms into uranium-239 (Z=92; N=147) which undergoes β- decay and loses an electron. A neutron then turns into a proton and the nucleus becomes neptunium-239 (Z=93; N=146). “Assuming we have enough neutrons, the reaction will keep going, creating heavier nuclei such as plutonium. The heaviest nucleus created in this way is fermium-257, which contains 100 protons,” says Antoine Drouart from the atomic nucleus research lab (LENA, Laboratoire d’études du noyau atomique) at the Nuclear Physics Department (DPhN – Université Paris- Saclay, CEA/Irfu).

Using accelerators, researchers merge two nuclei into one, heavier nucleus. Positively charged nuclides naturally repel each other: only when they are accelerated can they pass the Coulomb barrier. Several combinations are possible at each merging, some more effective than others. “For example, to create a copernicium atom (Z=112), we can bombard an uranium target (Z=92) with a beam of calcium- 48 nuclides (Z=20), or use a lead target (Z=82) with a beam of zinc nuclides (Z=30),” explains Antoine Drouart.

The stars are nuclide factories

Although not all the nuclides on the chart of nuclides have been observed, they may all exist in the Universe, produced by nuclear processes that bring thousands of reactions and nuclei into play. “Since we cannot study all of them, we use stellar models to pinpoint key reactions, such as the capture of a proton by phosphorus-30 in novae (binary star systems) or that of a helium nucleus by nitrogen-13, a significant reaction in supernova explosions,” says IJCLAB researcher Nicolas de Séréville.

“The nuclear reactions induced in the accelerators are designed to resemble those we observe in the stars, as closely as possible,” comments his colleague David Verney. “When it proves impossible to carried out an indirect measure of an exact replica of a reaction, we use a substitute.” One such case is the reaction between hydrogen and phosphorus-30. “We cannot directly measure the capture of a proton targeted by a phosphorus-30 beam, a reaction in which the product, a sulfur-31 nuclide, decays to its ground state by emitting a gamma ray photon. Therefore, using ALTO (the Orsay linear accelerator and Tandem) at IJCLAB, we carried out an indirect measure of a charge exchange by aiming a stable beam of helium-3 onto a stable target of phosphorus-31, indirectly propagating sulfur-31,” explains another colleague, Faïrouz Hammache.

Trying to understand the origin of these elements is a long-term endeavour for nuclear physicists. The IJCLAB researcher has been studying the formation of lithium-7 during nucleosynthesis for a long time. “The standard model predicts the quantities of the first chemical elements – hydrogen, helium, deuterium, lithium, beryllium – formed during the Big Bang. In the case of lithium-7, the prediction differs from the quantity actually observed in the Universe by a factor of 3,” says Faïrouz Hammache. “We have studied all possible nuclear reactions, and none of them explains this difference. The cause is therefore to be sought elsewhere, perhaps beyond the standard model.”

The potential of radioactive beams in nuclear astrophysics

While nuclear physics has been able to produce stable ion beams since the 50’s – at first, very light ones and later, heavier ones – the current challenge is to extend the range of radioactive beams available on accelerators like ALTO or GANIL (France’s national Large Heavy Ion Accelerator) located in Caen. Nicolas de Séréville explains: “We know that neutron-rich nuclei of intermediate mass are involved in the rapid capture of neutrons during the fusion of neutron stars; this is how half of the elements heavier than iron are formed in the Universe. By creating populations of these nuclei, which turn into very ephemeral and manipulable radioactive sources, we can determine the fundamental properties of these ions – such as mass, the key to nuclear power.”

Forming these new nuclei involves taking nuclear paths through other radioactive nuclei which, being unstable, cannot serve as targets. “The only solution is to continuously produce them, transport them in a beam at the right energy and strike a stable target with them,” says David Verney. Transposing the knowledge acquired using stable beams to unstable beams is something of a gamble, and a complex one at that. There’s no guarantee that they will yield the same level of performance. “There are 104 to 105 particles/second in a radioactive beam, compared to 1011 particles/second – if not more – in a stable beam. That means the detectors must have a higher degree of sensitivity,” adds Verney. 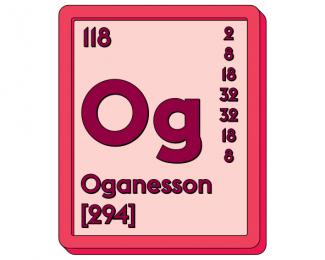 Oganesson-294 (Z=118) is the heaviest element created to date using an accelerator. Only three nuclei have ever been obtained, by bombarding very thin sheets of californium-249 (Z=98) with stable ions of calcium-48 (Z=20) at very high intensities. These nuclei have a lifetime of 900 ms. “For a new element to be official, the nucleus created must have a lifetime of over 10-15 s, so that the electron shell has the time to reorganise around it. In practice, what limits us is our detection capacities, currently standing at around 10 μs (10-5 s),” notes Antoine Drouart, who studies the structure of transfermian nuclei (between 100 and 104 protons) by spectroscopy, with a view to understanding superheavy nuclei.

These nuclei of over 104 protons, with their sensitive lifetimes, should also not exist: once again, it is quantum effects that make their existence possible. “Protons and neutrons arrange themselves in such a way as to increase the stability of the nucleus. These layer effects tell us about the nuclear interaction. Today’s theoretical models even predict a magic number or island of stability at 114 to 126 protons for around 184 neutrons, with nuclei that would have lifetimes of over a year,” adds Antoine Drouart.

Since accelerators around the world have so far only managed to create a dozen or so – perhaps a hundred-odd at most – knowledge about these the superheavy nuclei remains limited. “We know a little about their decay properties (through either α decay or spontaneous fission) according to the nucleus produced. On the other hand, we know very little about their mass, ground state, levels of excitement or structure,” says Antoine Drouart.

The only way to solve this is to create more superheavy nuclei. That’s one of the purposes of SPIRAL 2, an accelerator currently in the start-up phase at GANIL. SPIRAL 2 uses some of the most high-intensity stable beams in the world. “In order to study the nuclei created, we have to move them far away from the target. We have to eliminate those that have not reacted or have yielded parasitic reactions; then, we have to isolate the superheavy nuclei and send them to a suitable detection device,” explains Antoine Drouart. All this is to be accomplished by an instrument dubbed S3, SPIRAL 2’s Super Separator Spectrometer, due to be operational by 2022. This instrument will select the superheavy nuclei and herd them to the detection station using a combination of electric and magnetic fields. “If we manage to create more superheavy nuclei, we’ll also be able to use detection techniques that are less sensitive, but more precise,” notes Drouart.

Today, a hundred years after being discovered, the atomic nucleus remains tantalisingly out of reach. No model can explain each and every one of its properties. All are partial. All, to a greater or lesser degree, are phenomenological. “In nuclear physics, we are still in a phase where experimental data add a great deal to theory, as we strive to advance in our description of the nucleus,” says Antoine Drouart. David Verney adds: “We can review the way a nucleus has been understood for many years since significant improvements in machine precision are enhancing our ability to probe its interior.” For nuclear physics, the future is still bright.