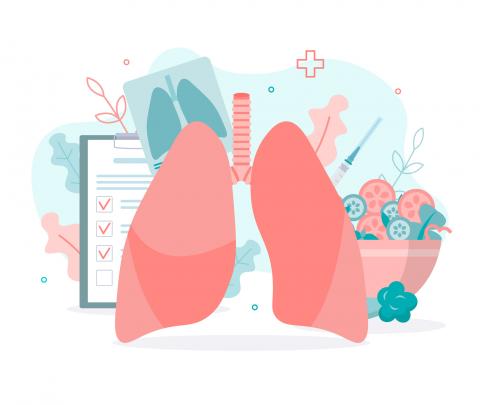 Probiotics to prevent respiratory infections in the elderly

The group of microorganisms which live in the intestine, known as the intestinal microbiota, has a key role in digestive and extra-intestinal health. The lung is also inhabited by microorganisms which form the lung microbiota. These two microbiota and their reciprocal interactions are the subject of a project led by the “Microbiota et santé digestive et respiratoire” (microbiota and digestive and respiratory health) team from the Institut de microbiologie de l’alimentation au service de la santé MICALIS - (The Institute of Food Microbiology in Support of Health) (Université Paris-Saclay, AgroParisTech, INRAE). Understanding the interactions between these microbiota and nutrition provides the foundation for new and innovative strategies for the prevention and treatment of respiratory infections in the elderly.

The vulnerability of older people to respiratory infections is a long-standing issue, made worse today by the health crisis. It is within this framework that Muriel Thomas’ team from the MICALIS Institute has been interested in recent years in pulmonary bacteria which have been isolated from mice and which influence the immune response. These results require an in-depth study of the pulmonary microbiota. Vinciane Saint-Criq, a pulmonary epithelium physiologist and research fellow in the team, is currently developing a project looking at the impact of nutrition on respiratory infections in the elderly.

Age and the ageing of the lungs

Age affects the respiratory system in three main ways. The first is of a mechanical nature. The lungs lose rigidity, the volume of the alveoli increases and respiratory capacity is affected. This makes it more difficult for older people to expel particles and pathogens which may have made their way into the respiratory tract, thereby increasing the risk of infection in these people.

The second impact is not specific to the lungs but corresponds to a breakdown in the immune response. This is called immunosenescence. It results in an intrinsic fragility as a person ages and a difficulty in forming long-term immunity, which compromises the effectiveness of vaccines in the elderly in particular.

Finally, age also affects the microbiota - whether pulmonary or intestinal. Levels of bacteria essential to the proper functioning of the body become unbalanced. This is often coupled with undernourishment, which is so frequently seen in the elderly.

Firstly, both systems share the same entry point, i.e. the mouth. In addition, when particles in the bronchial tubes are coughed out, microorganisms can pass from the lungs to the intestines. The opposite is also true during reflux from the stomach and oesophagus. Finally, lungs and intestines are involved in the transport of metabolites - small molecules resulting from metabolism which reach the bloodstream or immune cells which pass through the lymphatic system. “Our hypothesis is that malnutrition, with its lack of certain nutrients, will generate a breeding ground for certain respiratory infections. These studies will lead to taking nutrition into account as way in which to prevent, or at least alleviate, the consequences of respiratory infections in the elderly,” explains Vinciane Saint-Criq.

How does it work in practice?

To study these processes, researchers at the Institut MICALIS have several alternatives, ranging from cell models for in vitro studies to animal models for basic research. In the case of more applied research, the team takes saliva samples and uses the similarity of the microbiota.

To get down into the upper respiratory tract, one of the techniques used consists of making the person inhale a saline solution which provokes sputum and allows the local microbiota to be recovered. A more precise (but also more onerous) technique consists of injecting physiological liquid into the lower respiratory tract and then recovering it. “It’s an invasive technique. It must be carried out under anaesthetic and is usually done in a clinic when a patient presents health problems which require seeing what's going on inside,” explains Vinciane Saint-Criq. Researchers sometimes recover excess material, with the patient's agreement, and use it to study the microbiota of the lower respiratory tract, which is the least accessible.

To obtain clinical samples or to carry out more in-depth studies, the team has a network of collaborators, which includes doctors and clinicians and which reflects its multidisciplinary nature. For example, Vinciane Saint-Criq is leading another project together with the Institut Necker-Enfants malades (INEM - Necker Institute for Sick Children), financed by the National Research Agency (NRA). The Saint-Antoine, Bichat and Beaujon hospitals in Paris are also regular partners of the team. “There is a very strong link between AP-HP and the MICALIS team in Jouy-en-Josas.”

At a later stage, the team plans to develop its network of industrial partnerships. The possible benefits are considerable, both in pharmaceutical, nutritional and gerontological fields. There is every indication that, in addition to a method of prevention, this research will lead to new treatments. “For example, flu is not necessarily very serious in itself, but it is the possible bacterial secondary infection which it can cause that makes it serious,” explains Vinciane Saint-Criq. Work has shown that during a flu infection, the content of acetate, a metabolite produced by the intestinal microbiota and essential to the immune system, is reduced. When mice are given an additional supplement of this metabolite after their flu infection, the occurrence of bacterial secondary infections in the lungs is reduced. This is still just preventive, but this is what we want to aim for - giving probiotics to prevent the harmful development of a respiratory infection.”