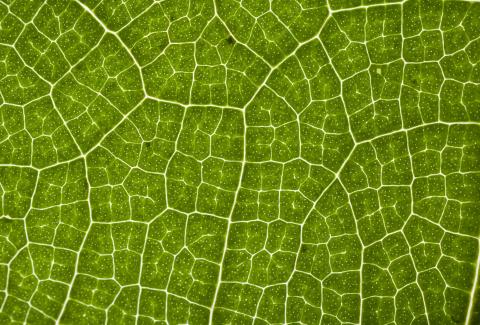 Plant growth under the microscope

Plant cells, unlike animal cells, have a rigid wall which helps control their growth. For a long time, scientists thought that this wall was only distorted by the hydrostatic pressure of cells. However, new nanoscale images obtained using super-resolution microscopy suggest a more complex process. A team of scientists from the Jean-Pierre Bourgin Institute (IJPB - Univ. Paris-Saclay, INRAE,  AgroParisTech) has discovered that the wall also has an intrinsic capacity for growth which is linked to the reorganisation of pectin nanofilaments, one of the essential components of the plant wall.

It is spring, the grass is growing, leaves are unfurling on the trees and plant growth can be seen with the naked eye. However, what are the microscopic processes behind these macroscopic changes? Surprisingly enough, researchers have still not clearly identified the subcellular phenomena which govern plant growth. The cells are surrounded by a very rigid pecto-cellulosic wall that interferes with their growth. How does the cell deform this wall to grow?

“Until very recently, the scientific community cited turgor pressure as the sole driver of plant growth,” explains Kalina Haas, a researcher at the IJPB and a pioneer of super-resolution imaging in plant sciences. “And this assumption has rarely been challenged.” The intracellular environment has a high concentration of ions and chemical compounds which create significant osmotic pressure of the order of one megapascal (1 MPa equals 10 Bar) in the cell. For most scientists, this pressure is the only driving force responsible for the distortion of the wall, like a balloon inflating with air. These stretched cell walls subsequently become re-shaped and their constituent polymers rearranged, causing irreversible cell wall expansion. “While a balloon can deflate, a plant wall never shrinks.”

However, Kalina Haas has questioned this theory following observations made using new emerging microscopy techniques. “We’re putting forward the theory that the enlargement of these cells may be caused by self-expansion of the cell wall, independent of osmotic pressure.”

The unexpected reorganisation of pectin

The researcher’s work, and that of her colleagues, focuses on the structure of the wall. This wall mainly comprises cellulose and a polysaccharide called pectin, which is well known to jam lovers. Pectin exists in two forms, namely methylated and unmethylated. The latter is present to a high proportion in growing tissue. This fact also set the scientists thinking. What if pectin played a role in the phenomenon? “Scientists have long thought that this polymer, whether in a jam jar or a plant leaf, was only capable of forming an amorphous gel.”

However, when Kalina Haas directed her super-resolution microscope at parietal pectin, she discovered that the polymer can be organised into nanofilaments. As a result, the scientist and her colleagues put forward the revolutionary new theory that plant growth results from the reorganisation of these nanofilaments. “Under the influence of a chemical signal produced by the cell, an enzyme in the cell wall splits the methyl groups carried by pectin resulting in changes in their overall charge and leading to a swelling of the wall.” Thanks to funding from an ERC Starting Grant in 2021 which Kalina Haas has just been awarded for her STORMtheWALL project, over the next five years she will be exploring this new theory in detail and the new scientific questions raised by her observations.

“The first question we need to answer is how do the nanofilaments organise themselves?” says Kalina Haas. The researcher has established that their distribution is anisotropic, i.e. it is not identical in all directions. This asymmetry dictates the direction of growth as the nanofilaments are only capable of radial swelling. However, what is the logic behind this organisation? To find the answers, the scientists stain the nanofilaments with fluorescent molecules before observing them using STORM super-resolution microscopy (STochastic Optical Reconstruction Microscopy), which is one of the most advanced techniques in the field. Using successive excitations and a long observation time, they identify the exact position of each fluorescent molecule. This makes it possible to overcome the resolution limit caused by light diffraction in other types of microscopy and to reach the nanometre scale.

However, super-resolution microsopy also has some disadvantages. It is very difficult to observe a living cell, the constant movement of which interferes with observation. The first step is to fix the cell in a state close to living and then obtain a snapshot at a given moment and observe the distribution of pectin nanofilaments.

Kalina Haas and her team are expecting to find that the organisation varies according to the type of tissue being studied (stem, leaf or root). They are also interested in a range of organisms, including the model plant Arabidopsis thaliana, single-celled algae, or maize, which is a plant of agronomic interest. “If we find phenomena which are consistent in all these plants throughout the course of their growth, this will demonstrate the universality of our hypothesis,” points out the researcher.

Understanding the cause and effect cascade

What drives this growth also still remains to be understood. “We think that there are mechanical and chemical sensors which direct growth in a certain direction. In this way, transmembrane receptors would form the link between the interior of the cell and the extracellular wall. Then, signalling peptides, which are very commonly used as a mode of communication in the living world, would interact with the pectin to reorganise it according to requirements.” The pH of the wall, which is very precisely regulated by the cell, is also involved in this mechanism.

This two-way communication between a cell and a pecto-cellulosic wall is still largely unknown at present. It is hard to observe, largely because of the brief nature of the exchanges. These take place in the space of a second or even a fraction of a second. “It is important not to fix the cells to observe this type of dynamic process. That would kill them.” Super-resolution microsopy is not suitable for studying these types of dynamic events, so the team has another string to its bow. This is the technique known as multiple FRET sensing (Förster resonance energy transfer) – or the transfer of energy between fluorescent molecules. The FRET fluorescent biosensors make it possible to directly observe certain physiological processes on living plants. The team is combining this technique with optogenetic tools which activate or deactivate cellular processes by simple exposure to light. These tools inhibit the activity of certain proteins such as the enzyme demethylated pectin, or activate ion channels in order to modulate the pH of the cell.

Scientists then measure in real time the effects on other components of the cell or wall, and their interactions with the FRET biosensors. “We will be able to observe in great detail the cascade of reactions which lead to the growth of the cell and disentangle the causes from the consequences so that we can put forward a clear mechanical model.” Once all the data has been collected, the team will build a digital model which includes the biophysical properties of the wall in order to predict the shape of the cell and its neighbours which will, in turn, show the organisation of the tissue or organ being studied. These models will be checked against the data taken on growing plants.

Understanding the reorganisation of pectin could provide possible avenues of intervention in order to stimulate plant growth. The research being carried out by Kalina Haas and her team is therefore crucial for agricultural research. Pectin is not, after all, just useful for making jam!