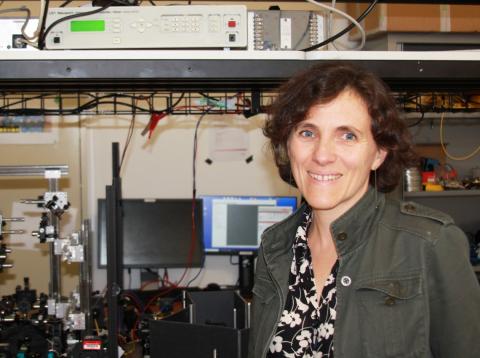 Pascale Senellart-Mardon: At the cutting edge of the second quantum revolution

Pascale Senellart-Mardon is a researcher in fundamental physics, a research director at the Centre for Nanoscience and Nanotechnology (Université Paris-Saclay, Université Paris-Sud, CNRS) and a professor at the Polytechnic School. In 2008, she invented a unique process that allowed the production of optical components used to develop quantum technologies. This scientific breakthrough earned her the CNRS Silver Medal in 2014. The success of the components obtained by the scientific community led her to launch Quandela, a startup that won the 2018 i-Lab Grand Prize. It now markets unique photon sources.

Pascale Senellart-Mardon owes her vocation as a researcher to the engineers of the Nançay Radiotelescope. "They sowed the seeds of research in me" from high school on. "A native of Orléans, I used to pass by the place every weekend as I visited my grandparents. I first underwent an internship, and then I started to spend there the school holidays, until I graduated high school! "She was granted a scholarship for the scientific and technical career of girls. Thanks to this grant, she funded her studies in Paris, first in preparatory classes at the Louis le Grand High School, then at the Polytechnic School.

Pascale Senellart-Mardon defended her thesis in quantum physics in 2001 and joined the CNRS one year later. The young researcher used nanotechnology tools to transfer the effects of atomic physics into semiconductors*. "We knew that a quantum box - an artificial atom - could emit photons separately. However, to make a light source useful for quantum technologies, we had to get rid of the environmental ʻnoiseʼ to obtain a very pure system, on the one hand, and erase its random aspect, on the other hand.

The researcher invented a technique to break free from the random nature of artificial atoms. In 2005, she had the idea of making an "optical cavity" around each of them, using a focused laser" to optically measure the position of the atom at the same time as performing the lithography, on a temperature of - 260°C!" With the support of her group leader and after months of development in a clean room, Pascale Senellart-Mardon was rewarded for her efforts at the end of 2007. A "magnificent" moment. Using this technique, her team produced the most efficient source of entangled photons in the world. Published in 2010, the Nature article had since been cited more than 500 times.

In 2015, everything changed, a second time. "With Valérian Giez and Nicolo Somaschi, respectively a PhD and a postdoctoral fellow, we improved the technology to a quantum purity of nearly 100%," recalls the researcher. Highly sought after by worldwide researchers eager to get these optical sources, the small team co-founded Quandela. The startup now employs six people. "It is the only one that manufactures quantum light sources in a reproducible way," says Pascale Senellart-Mardon. Nowadays, she spends 20% of her time working as a scientific advisor on it, but remains above all a researcher. With her team at the Centre for Nanoscience and Nanotechnology (Université Paris-Saclay, Université Paris-Sud, CNRS), she combines her research in quantum physics with the development of optical components that can be used for applications. "The researchers and engineers with whom we collaborate are interested in optical quantum computers, communication networks or quantum relays."

"Quantum technologies are booming all over the world, we are talking about the second industrial revolution," says Pascale Senellart-Mardon. The President of Université Paris-Saclay has just tasked her with structuring all the forces of quantum science on the Saclay plateau. "China has its quantum satellite, the US majors are racing for the quantum computer. We must help the French scientific community to cope with international competition: there are quantum gems in academic laboratories that just need to be developed," she says.

A researcher, an executive and a project manager, Pascale Senellart-Mardon has a strong communicative drive and is aware that she is living "an extraordinarily stimulating adventure".

The first is the superposition, the idea that a particle in quantum mechanics (which is also a wave) will be able to follow several paths in parallel.

The second is entanglement. "The idea is to take two photons and to put them in an entangled state. Then I split them: I send one of the two to Paris and the other one to Toulouse. If I carry out a measurement in Paris, I would instantly get the same one in Toulouse. Therefore, these are two particles with a perfectly correlated fate.