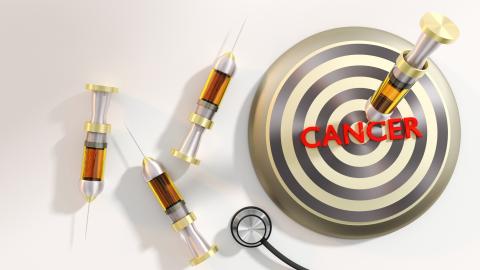 Targeted therapies, which first appeared during the start of the year 2000, use molecules which act specifically on cancer cells, as opposed to conventional chemotherapy which also adversely affects healthy cells. Although they are effective and less harmful, they do not guarantee a cure, as resistance will inevitably occur. Understanding these mechanisms and how to overcome them is the work of Luc Friboulet, a researcher at the Molecular Predictors and New Targets in Oncology Laboratory (PMNCO - Université Paris-Saclay, Gustave Roussy, Inserm).

Luc Friboulet’s interest in this area stems from tyrosine kinase inhibitors (TKIs), which he studied during his post-doctorate at Massachusetts General Hospital in Harvard. On his return to France in 2015, he set up a research group (the genetic tumor adaptation to kinase inhibitors) at the Gustave Roussy cancer centre which was dedicated to this largely unresearched area. TKIs affect tyrosine kinase enzymes, which play a major role in signalling pathways downstream from growth factor receptors. In the case of certain mutations, cancer cells become totally dependent on the activity of one of these kinases to survive. Neutralising their effect considerably reduces cancer growth while limiting side effects for patients. Since healthy cells do not exhibit this “oncogenic addiction” to a single kinase, the inactivation of the target is offset by other kinases. Unfortunately, use of these therapies has its limits. Not all cancers are responsive. For lung cancers, despite the fact that ten or so oncogenes (genes which promote the development of cancer) have already been identified and have treatments available, one third of cases still remain unresolved. Another issue is that resistances often arise during the course of treatment. However, as Luc Friboulet points out, “Patients whose average survival was six months for advanced cancers have had their survival extended by several years - to up to eight or nine years. In many ways, that changes everything for them.”

Resistance to TKI treatments occurs as the result of several distinct mechanisms which may work in tandem. The target might change due to a secondary mutation, preventing the treatment’s effectiveness. The role played by epidermal growth factor receptors (EGFR) in lung cancers illustrates this phenomenon well. Following an initial activating mutation, an EGFR will trigger transformation into a tumour cell. The use of an inhibitory drug blocks its activity by binding to its active site, but if a secondary mutation occurs which alters this site, it may prevent binding to the TKI. In another case, described as a “bypass pathway” the appearance of a mutation involving another kinase maintains the signalling essential for the survival of cancer cells, rendering the initial treatment ineffective.

As with antibiotic-resistant bacteria, there is a kind of “arms race”. Each time a treatment loses its effectiveness, the challenge is to identify another target to inactivate. However, this “race” cannot go on forever. “For 90% of patients, the clinical benefits are there, but 100% of them will relapse and eventually not respond to treatment in the longer term. We may no longer be able to find an effective molecule or fail to identify a resistance mutation, which happens in 30% of cases. ’

Recent discoveries made by Luc Friboulet’s team have opened up other interesting possibilities, such as the discovery of the role of the fibroblast growth factor receptor (FGFR) in bladder cancers. Within a remarkably short period of just two years, the pharmaceutical industry has made around ten specific inhibitors of this receptor available to researchers. These act according to the same mechanisms as for EGFR. The first results should be published within a year. Other possibilities, which are less advanced for the moment, are also being explored, such as the “single cell” approach which consists of isolating cells for individual sequencing and studying resistance much earlier. However, this method generates huge amounts of data which need to be processed using bioinformatics tools requiring very specific skills.

In view of these constraints, Luc Friboulet emphasises the need for a translational approach to his research. “Available cell models have allowed us to make the initial breakthroughs, but we’ve observed resistance mechanisms in some patients which have never been seen in the laboratory.” He has gained the trust of medical clinicians at Gustave Roussy by participating in cross-disciplinary committee meetings to help them understand resistance and propose alternative treatment options. He helped to set up the Match-R clinical trial where samples from patients before, during and after their treatment with targeted therapy are sent to his laboratory each week. By sequencing the DNA of these cells, he can create models capable of keeping cancers “alive” and can then test new drugs which are truly effective against these resistances. “The medical clinicians quickly understood the win-win aspect of the process, in that by participating in this research, they can bring benefits to their patients.” If no mutation is found in the patient's cancer, it is still possible to “blindly” test drug combinations and sometimes find a therapeutic solution without being guided by a specific genetic event.

The importance of the ERC

In 2016, Luc Friboulet was awarded European Research Council (ERC) funding in recognition of the importance of his work, which has also played a key role in convincing the medical community. “The grant changed everything for me. Without it, I would have been limited to smaller projects. This funding from the ERC has allowed me to become an official team leader and obtain a position as an INSERM research fellow in 2018 and to carry out my research for five years with a team of about ten people in complete financial freedom.” This ERC Starting Grant is coming to an end in a few months' time. An application has been made for the next stage in the form of a ERC Consolidator grant. The outcome will be known in April 2022.

Could cancer become a chronic illness which can be controlled throughout a lifetime? Luc Friboulet remains hopeful. “Recent advances support this idea, as does the move by many laboratories to address residual disease - in other words a reservoir of persistent cells which tolerate a drug. They remain dormant until one of these cells acquires a mutation one day, multiplies again and recolonises the patient's whole body.” By understanding why these cells do not die and by using a treatment which targets them at that time, relapse could be postponed dramatically or even permanently.