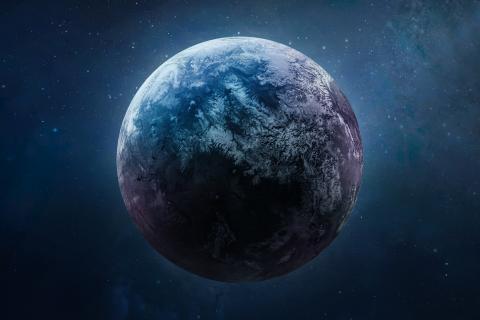 The origins of life: investigating exoplanets

Should we look into the depths of space or probe the heart of molecules to solve the enigma of the creation of life? “Both!”  is the answer given by members of Nathalie Carrasco’s team at the Atmospheres, Environments, Space Observations Laboratory (LATMOS - Univ. Paris-Saclay, UVSQ, CNRS, Sorbonne Univ.). These chemists are reconstructing conditions for the development of life in the laboratory based on telescopic observations of planets which resemble early Earth. In so doing, they are trying to find the answer to the origins of living beings.

Life on Earth appeared just over 3.5 billion years ago in the form of aquatic microorganisms. What series of events led to this first spark of life? To answer this, researcher Nathalie Carrasco is simulating at LATMOS the early atmosphere of Earth - one which existed before any living being had drawn its first breath. “We want to understand the extent to which atmospheric chemistry has contributed to the emergence of life,” she explains. “We believe that interactions between solar radiation and the early atmosphere generated complex organic molecules which then reacted chemically and led to life in the oceans.”

The Earth’s atmosphere has changed dramatically in a few billion years, so it is difficult to imagine its original composition. The researcher and her team have turned to the vastness of space in order to look for similarities to early Earth. “We first studied Titan, a natural satellite of Saturn, which is an interesting but very extreme case. Its atmosphere is composed almost entirely of nitrogen and methane.” As a result, Titan is an imperfect model for the Earth as it is also too far from the Sun for water to be liquid. “Advances in observation techniques now allow us to look at exoearths which are a more realistic study model,” reveals Nathalie Carrasco.

These rocky exoplanets are located outside the solar system. Some of them orbit in the habitable zone of their star and at an ideal distance for water to exist in liquid form. About ten exoearths in the habitable zone have been discovered so far, but little data has been collected on them. Does their atmosphere contain oxygen, methane and organic compounds? The mystery surrounding them is about to be resolved thanks to observations made by the James Webb Space Telescope (JWST) which was launched in December 2021 at a distance of 1.5 million kilometres from Earth. More powerful than any previous space telescope, this infrared telescope has been collecting observations on several exoplanets since July 2022.

The focus shifts to the laboratory

A better understanding of the Universe and its creation does not just rely on telescopic observations however. Astronomers are being helped by chemists, such as those in Nathalie Carrasco’s team, who can reproduce in the laboratory the atmospheric compositions of the various exoplanets being studied. The chemists mimic the electromagnetic waves emitted by the stars around which the exoplanets orbit, particularly extreme ultraviolet radiation. These waves are responsible for a large part of the chemical reactions which take place in the atmosphere of exoplanets. The ozone layer which surrounds the Earth today absorbs the Sun's radiation and protects its atmosphere from induced chemical reactions. For their studies, chemists must therefore generate equivalent radiation using a very powerful energy source. “By bombarding gas mixtures with electrons or VUV (Vacuum UV) photons, we can recreate the chemical conditions found in an extraterrestrial atmosphere. We can then observe the formation of solid particles in our experimental reactor,” explains Ludovic Vettier, a research engineer at LATMOS.

These solid particles are organic aerosols. Based on her knowledge of the satellites of Saturn, Nathalie Carrasco can describe their characteristics. “Titan is covered by a permanent fog of these aerosols. These solid nanoparticles are created by the interaction between solar radiation, nitrogen and methane. It is more than a thousand kilometres thick and hides the surface of the satellite.” It is likely that a similar haze enveloped early Earth before the appearance of the ozone layer and still covers the exoearths which are about to be analysed by the JWST.

So perhaps the explanation for the origin of life lies in these aerosols? However, before they become part of the solution, these aerosols are currently a source of problems. Their presence complicates the spectroscopic analysis of data provided by existing telescopes which give scientists information on the composition, temperature and mass of celestial bodies, as well as on the presence of carbon dioxide, water vapour or methane in the atmosphere of the exoplanets studied. The work of Nathalie Carrasco and her team is becoming all the more crucial. If, while observing using the JWST, only the upper atmospheric layers are directly observable, her team can deduce from this fragmentary data the chemical reactions taking place in the lower layers right down to the exoplanet's surface.

Looking for answers in the clouds

The presence of such solid organic fog also affects the weather. The weather is likely to be bad over the exoearths as aerosols promote the condensation of water vapour into droplets. This creates clouds due to the principle of condensation nuclei. “In clouds, aerosols of organic matter become trapped in the heart of liquid water droplets. This phenomenon is extremely interesting from the point of view of prebiotic chemistry,” adds Nathalie Carrasco.

These extraterrestrial clouds are therefore likely to contain a wealth of chemical reactions involving gaseous molecules, liquid water and solid aerosols - the three states of matter. According to the scientists at LATMOS, the complex molecules resulting from these interactions sediment and generate a variety of chemical reactions on the surface of the exoplanet, perhaps even resulting in a living organism. “This is perhaps our chance to directly observe what happened on Earth just before life emerged.”

To infinity and beyond

Thanks to being awarded an Advanced Grant from the European Research Council in 2022 for the ‘OxyPlanets - Exo-terrestrial habitability under various atmospheric oxidation conditions’ project, Nathalie Carrasco’s team is expanding in order to support, as part of an international consortium, all the discoveries made by new generation telescopes such as the JWST and the future European ESA-ARIEL telescope. “The launch of the JWST has boosted emerging research on exoplanets,” enthuses Nathalie Carrasco. LATMOS, with its unique expertise in the field of atmospheric chemistry reconstruction, is at the forefront of these groundbreaking developments.

Unlike their study of Titan, where only nitrogen and methane were introduced into the experiment, the scientists will now be able to modify the gas mixture based on initial observations from the JWST. They can now add new elements, such as carbon dioxide (CO2), carbon monoxide (CO) or sulphur dioxide (SO2) to obtain novel aerosols. They will then inject these aerosols into a mist of water droplets in order to reproduce the cloud chemistry of the exoearths.

Humans are not likely to set foot on exoplanets any time soon, the closest of which is 40,000 billion kilometres from Earth. However, understanding what the environment is like out there in deep space could give mankind the keys to their own story here on Earth.