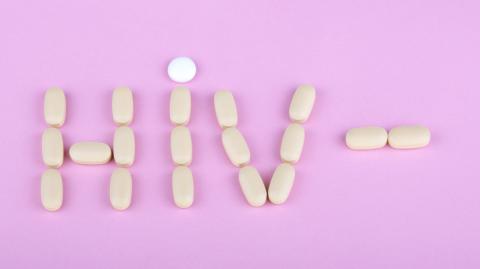 Not only is Olivier Lambotte a doctor, head of the internal medicine-immunology unit at Hôpital Bicêtre and practising Professor in the School of Medicine at Université Paris-Saclay, but he is also a researcher in the centre for Immunology of Viral infections and Autoimmune diseases (ImVA-HB – Université Paris-Saclay, CEA and Inserm) and director of the Life, Sciences and Health Graduate School at Université Paris-Saclay. He has been studying HIV persistence mechanisms for more than twenty years, with the hope that patients may one day be able to avoid antiretroviral therapy, and instead rely on their own immune response.

“I am trying to understand how HIV persists in patients who have been treated using antiviral antiretroviral therapy. These treatments totally block the virus from multiplying and yet, the day we stop it, the virus returns within two weeks, even though it was completely undetectable,” explains Olivier Lambotte. His work first focused on the immunological aspects of this persistence, showing that the virus remained hidden in different ‘reservoir’ cells, including certain types of CD4 T cells. “A major part of our work involved typifying them by studying blood. Then, when we had done what we could in humans with blood, we turned to accessible tissues, such as adipose tissue. We were able to prove that they can also contain reservoir cells.” Since this type of tissue is hard to reach in humans, Olivier Lambotte’s team at Kremlin Bicêtre merged with the immuno-virology unit at the CEA in Fontenay-aux-Roses, led by Roger Legrand. “Their research about SIV (simian immunodeficiency virus) in primates, which is the equivalent of HIV (human immunodeficiency virus) in humans, complemented ours.”

This ‘cure’ strategy aims to help HIV carriers live as long as possible without treatment. “Some, although rare, patients can live without the virus multiplying,” says Olivier Lambotte. This is the natural ‘cure’ model. These HIV controller patients were identified fifteen years ago by Jean-François Delfraissy, the then head of the internal medicine/immunology department at Hôpital Bicêtre.  Since 2011, Olivier Lambotte has been the Principal Investigator in the national cohort study by the French National Agency for Research on Aids and Viral Hepatitis (ANRS) concerning these HIV controllers in France. “More than 300 patients were identified in France. They are regularly monitored by a consortium of around ten national research teams, each of whom works in a specific field.” On top of managing the ANRS cohort, Olivier Lambotte has been the co-head of the ANRS North/South research clinic for many years now.

Every hypothesis has been tested to understand this extraordinary control mechanism. Is the virus present but inactive? No. Is there a genetic explanation? No, although certain genetic features favour virus control. The correct answer comes from the patient’s immune system. “Their immune system has unique properties that completely block the virus,” clarifies Olivier Lambotte. Research teams are therefore focusing on these systems in order to transpose them to patients taking antiretroviral therapy. “We are looking to optimise immune responses of non-controller people to make them controllers.” The success of this research depends heavily on specialist teamwork.

Olivier Lambotte was the lead author of the chapter about spontaneous control models in the latest article by the International AIDS Society in the journal Nature Medicine. The laboratory team carried out pioneering work on the theme of HIV ‘reservoirs’. Even now, there are only a few teams in the world that are studying these reservoirs in HIV controller patients. “There are three or four teams in the United States, two in Spain and ours,” points out the lecturer.

Immunology as a guiding path

Olivier Lambotte’s childhood dream was to become a doctor. His passion began when his Year 3 teacher showed his class copies of X-rays. “I thought it was amazing to be able to see the heart and the lungs.” After sitting his baccalaureate, he was accepted into the first year of health studies in 1989 and joined the School of Medicine at Université Paris-Sud a year later. In 1994, he chose internal medicine as his residency speciality, "in order to continue to look after sick people,” he explains. “These were the dark years of the AIDS crisis. It was gut-wrenching work during my first semester of residency in the infectious diseases department.” He thought about becoming a researcher while doing his Diplôme d’études approfondies (Diploma in Advanced Studies , the equivalent of a Master’s degree nowadays) in immunology, and then during his final thesis in medicine about the origin of sepsis in people infected with HIV. At the end of his residency, he took two years of sabbatical to carry out a scientific thesis at Université Paris-Sud, about HIV persistence mechanisms in reservoirs. It was Jean-François Delfraissy, “an exceptional person’, who encouraged him to do and lead research. Olivier Lambotte began his term as chief resident in his department at Hôpital Bicêtre before being appointed as a practising lecturer, then practising professor in 2010.

“From the start of my career, I have understood that immunology is cross-disciplinary, and creates a shared language between doctors with different specialities.” For eight years now, Olivier Lambotte has worked closely with oncology colleagues at the Institut Gustave Roussy on research about new types of immunotherapy and the management of new medicine in oncology, which is a completely new field of medicine, according to him.

Olivier Lambotte thus balances his research interests with the important role of caring for and helping his patients, to whom he devotes five half-days a week. He is also vice-dean of learning in the School of Medicine at Université Paris-Saclay and head of the second year of Master’s study in immunology in the biology and health department. “While Université Paris-Saclay was being formed, the field of medicine was spread across three Graduate Schools (GS),” he explains. “With my rather fundamental profile, I was offered the opportunity to lead the GS Life, Sciences and Health (LSH).” Olivier Lambotte accepted, inspired by the enthusiasm of this team of ‘prefigurators’. “Université Paris-Saclay’s strength is that it has reached an unrivalled critical mass which means that it now appears in international rankings. This makes it more appealing.” The GS LSH organises research days, develops international courses, has already funded seven scientific projects and is preparing for its graduation ceremony, which will be held on 22 April 2022. “I’ve found the guiding principle to allow me to work collaboratively and in a cross-disciplinary way. This collaborative work is essential to helping our students who are finishing their theses. The more of us there are around the table, the stronger we are.”