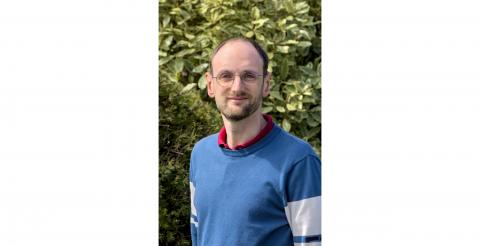 Nicolas Morange: The Origin of the Universe

Nicolas Morange is a researcher at the Laboratoire de physique des 2 infinis - Irène Joliot-Curie (IJCLab - Université Paris-Saclay, CNRS), which is the result of the merger of five large entities dedicated to subatomic physics at the Orsay campus. Morange has recently been awarded the CNRS bronze medal, an honour that has encouraged him to pursue his research on the Higgs boson. Higgs boson is a particle unveiled for the first time in 2012, which enables researcher to enter the long tradition of particle physics research to explain the origin of the world little by little.

Within the IJCLab, Nicolas Morange is on the ATLAS team, which is one of CERN’s four international experiments at the LHC (Large Hadron Collider), the particle accelerator based in Geneva. 3,000 physicists around the world are collaborating on the ATLAS experiment to understand the origin of the universe.

This is why they are tracking the Higgs boson, an infinitely small particle that was predicted back in the 60s by the standard model theory of particle physics, yet which was only observed for the first time in 2012. “This theory explains everything – or almost everything – about the infinitely small in our universe, says Nicolas Morange. It demonstrates that the quantum field associated with the Higgs boson lies at the origin of the mass of all other particles. In other words, by studying it, we are able to understand why and how all particles gained mass in the very first moments of the Universe at the time of – and just after – the Big Bang”.

The researcher specialises in one of the ways that the Higgs boson decays. “I most frequently study decay into a pair of b quarks. This accounts for 60% of decay, but is very difficult to spot from the billions and billions of proton collisions (40 million per second between 2010 and 2012, then between 2015 and 2018), especially since many of them resemble drops of water! This is what we call background noise. We have to implement highly advanced machine-learning technology to analyse very large amounts of data and isolate the signal we are looking for”.

An experiment conducted by 3,000 people

Nicolas Morange and his team gather this data from the "calculation grid" provided by CERN, following the example of other laboratories worldwide. Funded by the European Union, CERN operates particle accelerators, while the ATLAS experiment detects and analyses collisions, led jointly by partner laboratories worldwide. This way, 3,000 physicists sign the same publications together. “We are organised by interest group: up to 80 physicists across 15 countries,” says Morange, who for a year led the group dedicated to studying decay into a pair of b quarks, “we divide the analysis work, then we check and compare our findings between us before publishing them”.

ATLAS is a gigantic detector (45 metres long, 25 metres wide).  It takes the form of a cylinder filled with electronic sensors and is located in a cavern 100 metres underground. It has not been operational since 2018. Designed in the 1990s to last until 2035, its detectors are currently getting a facelift before restarting operations in mid-2021. Nicolas Morange, like all physicists, is engaged in this renovation – his second area of research. In collaboration with engineers from IJCLab and OMEGA laboratory (of the École Polytechnique), he is working to replace the electronics of a LHC detector (liquid argon calorimeter responsible for measuring particle energy), as part of the ATLAS experiment.

“I’ve always been interested in understanding how the world works,” says the young researcher, who defended his thesis at the CEA at the very moment the Higgs boson was discovered, “a great time, which has sent ripples well beyond the scientific community!”  After completing a post-doctoral programme at CERN, Morange was recruited in 2014 at the CNRS, and has recently been awarded the Bronze Medal. “For me, this is a true sign of recognition for the particle physics community, as well as an incentive to go even further“. The results of his research on the Higgs boson, with five years of data, have just been published: most definitely providing one of the most advanced developments in several years...